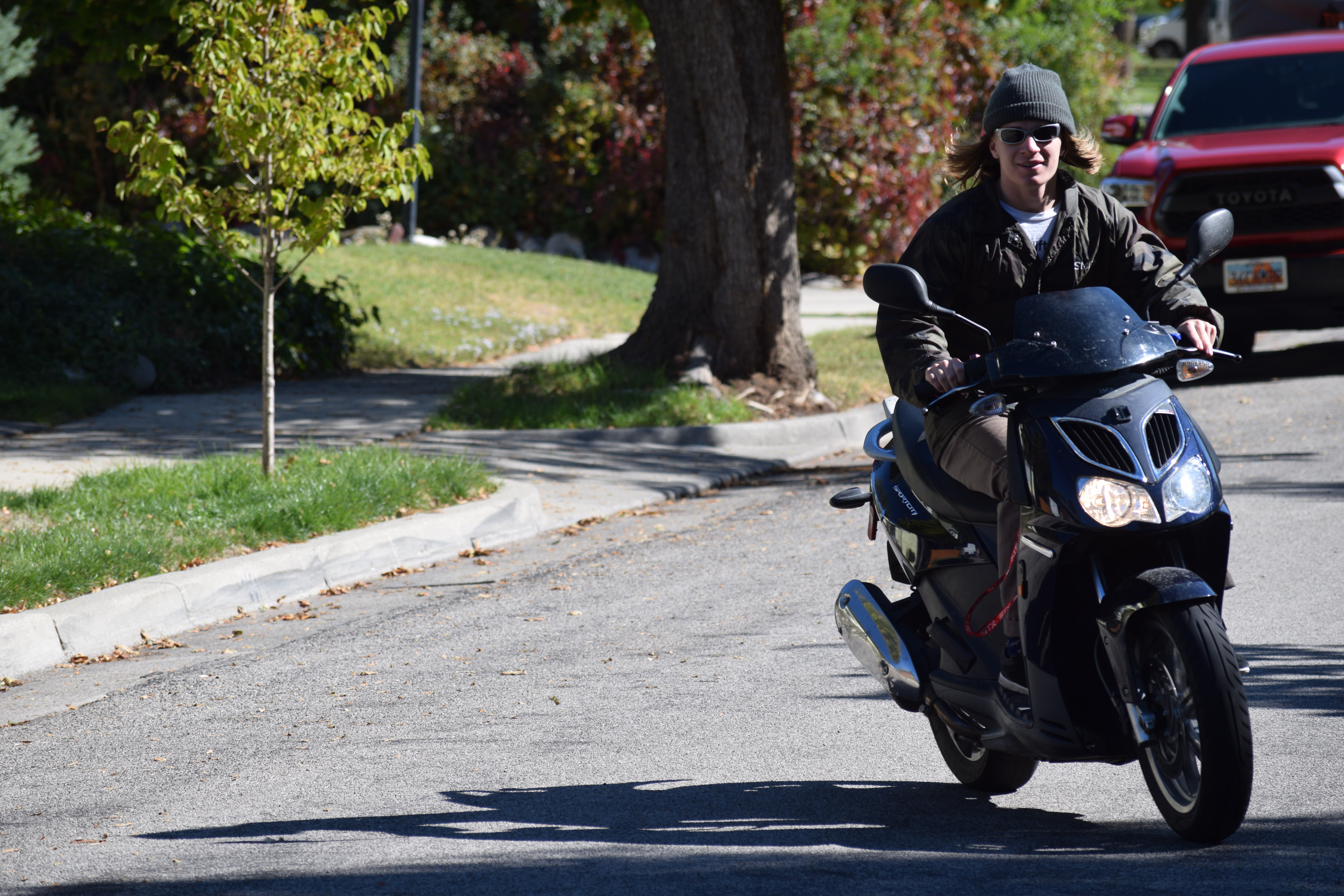 Sophomore Bruce Ostler rides his Aprilia Sportcity 250cc moped near his house in Sugarhouse on Oct. 12. Ostler said he purchased his moped in the spring to have a cheaper alternative to his truck. (Photo by Sebastian Durante)

Bruce Ostler’s morning commute to class is unique. He doesn’t drive a car or walk the four blocks from his house in Sugar House. Instead, Ostler steps outside every morning, opens his garage and pushes his moped off its built-in kickstand. He presses a button beneath the throttle that makes the engine sputter to life, with a puff of white smoke.

Ostler is not the only one to adopt this mode of transportation. This year there has been an influx of off-campus students at Westminster College purchasing mopeds, many of them friends who ride together. The Forum talked to several student moped owners, who refer to themselves as the crew, to learn more about what has been driving this trend.

Because of their small engines, mopeds are fuel efficient and some low CC mopeds can get as much as 132 miles per gallon, according to Popular Mechanics.

“CC”, short for cubic centimeters, is a measurement of motorcycle and moped engine displacement. The Department of Motor Vehicles says that engine displacement measures the amount of air and fuel that is sucked into each cylinder during engine operation. The more air and fuel available in a cylinder (higher CC), the stronger the combustion, resulting in more power generated. In other words, higher CC generally equals more power and lower gas mileage, while lower CC equals less power and higher gas mileage.

Wyatt Connor, a junior nursing major, says he bought his moped a year ago, before the recent jump in popularity.

“I didn’t have the funds to just buy a new car, so I saw a moped on KSL so I researched it and bought it,” said Conner who owns a Yamaha Zuma 50cc. “It’s also great on gas mileage. I get around 100 mpg.”

Bruce Ostler, a sophomore psychology major, said he was one of the first students to purchase a moped this year.

Ostler said that fuel economy was a big factor in his purchase, especially the inexpensive fillups.

“I fill it up probably once every two weeks,” Ostler said. “It costs $6 to fill it, where I was filling the truck up once every week and it was like 50 bucks.” 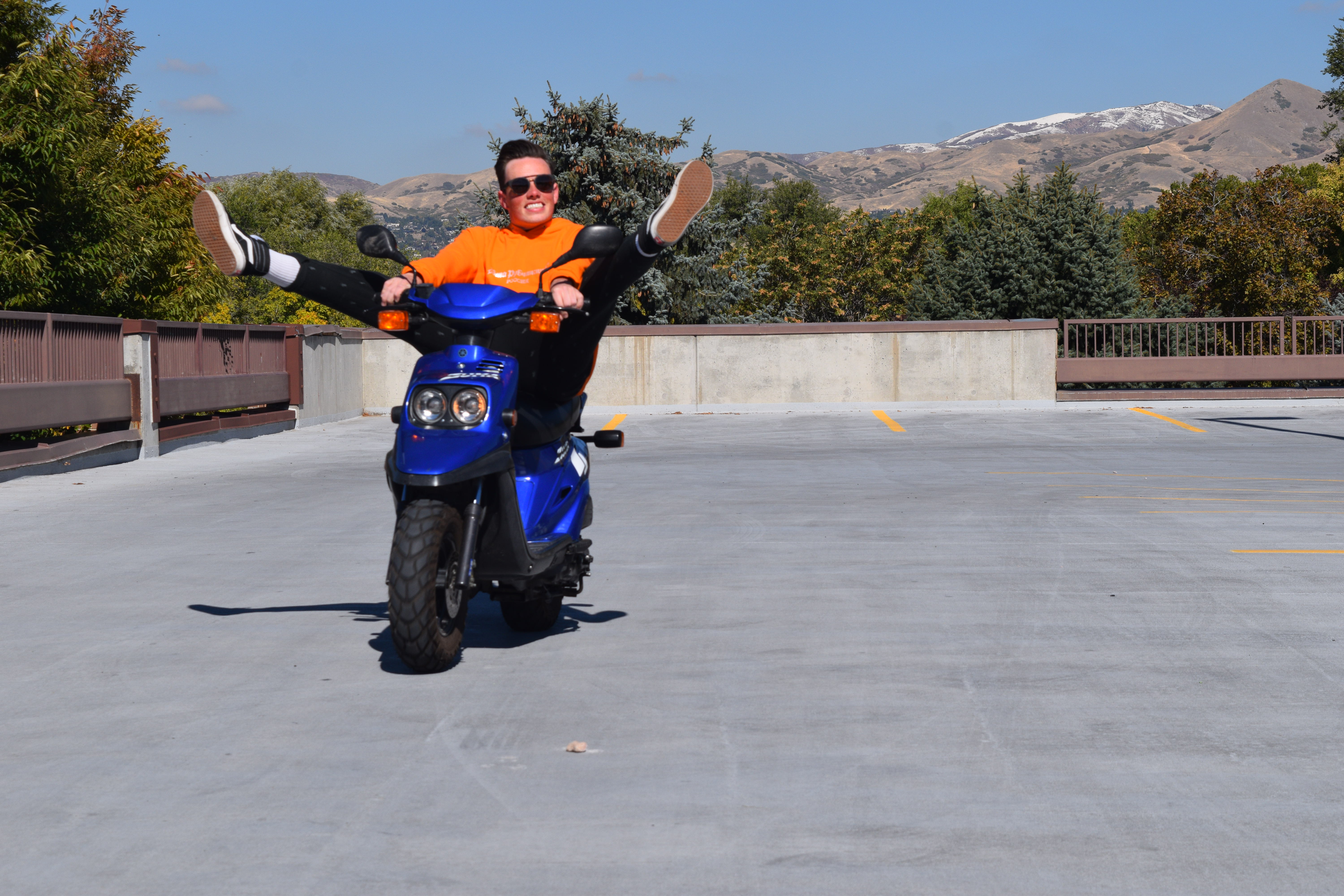 Junior Miles Paddock goofs around on his Yamaha Zuma 50cc moped on Oct. 12. Paddock is one of several students at Westminster College who have purchased mopeds as an alternative form of transportation. (Photo by Sebastian Durante)

Miles Paddock says he got his Yamaha Zuma 50cc around a month ago.

“I get around 80 miles to the gallon,” Paddock, a junior finance major said. “It’s a 2-stroke so its super reliable.”

Two-stroke engines are a lightweight engine design, using a mixture of fuel and oil to keep the engine lubricated, rather than separate reservoirs like 4-stroke engines, according to Howstuffworks. The resulting system has a strong power output relative to weight.

While students said fuel economy is a major factor for many who are considering buying a moped, other factors play a role in the economic value of purchasing one.

Liam and Conor Conkling are brothers from New Hampshire who both attend Westminster. They said they purchased their shared moped, an IL Bello 150cc, about a month ago.

“My brother and I went in on it together,” said Liam Conkling, a junior special education major. “It was a $700 moped, so we split it and that made it cheaper. It’s a pretty big moped with a big motor. I could’ve gotten one for half the price but it wouldn’t have been as nice.”

“Liam has a car out here, so this allowed me to have some sort of wheels 24/7,” Conor Conkling said. “If Liam had the car, I had the moped or vice versa.”

According to the National Highway Traffic Safety Administration (NHTSA), 5,286 people died in motorcycle accidents in 2016. The NHTSA includes mopeds in this statistic.

Liam Conkling said he crashed the moped he shares with his brother, leaving it in need of repair.

“We’ve all dumped them before, but I crashed the hardest,” Liam Conkling said. “We were […] in a gas station parking lot. Because mine is more powerful, the tail slipped out and it lurched across the road into the ditch.”

Conkling also said that while the crash is a financial burden, it gives him the opportunity to learn how to complete repairs on his own.

Liam Conkling is not the only one of the crew that has had an accident with the mopeds.

The lack of protection and being small on the road compared to a car is a cause for concern among other owners. 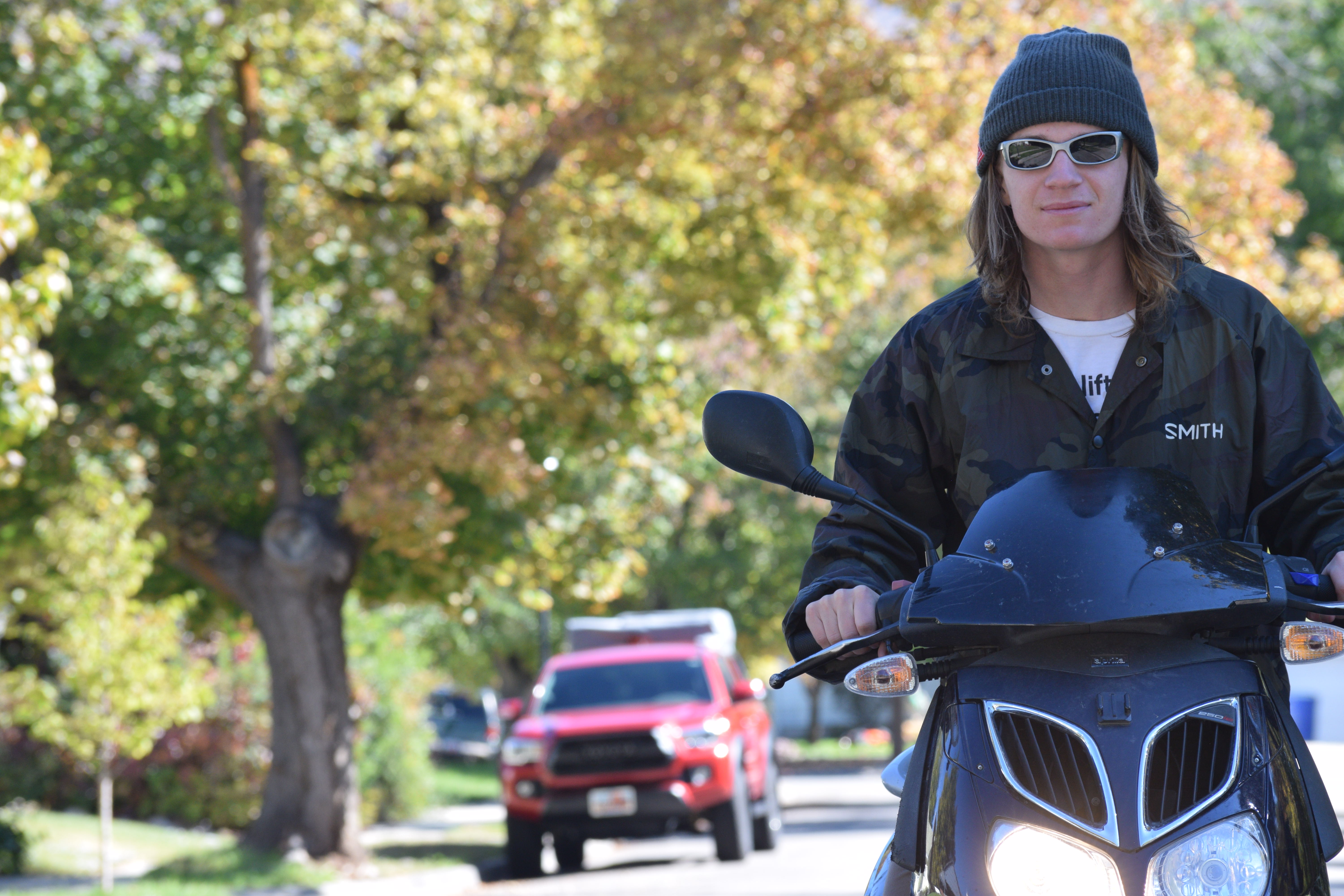 Sophomore Bruce Ostler rides his Aprilia Sportcity 250cc moped near his house in Sugarhouse on Oct. 12. Ostler said he purchased his moped in the spring to have a cheaper alternative to his truck. (Photo by Sebastian Durante)

“I have to be more aware of the other drivers because they aren’t really looking out for me,” Wyatt Connor said. “What would be a fender bender in a car would kill me on the moped.”

Students said that part of the appeal for owning a moped is the fun factor and riding together as a group.

“My good friend Miles had purchased a moped, and it kind of gave me a taste of what it feels like to ride on the open road, and it was contagious,” Liam Conkling said. “I wanted to ride with Miles and have more people riding together.”

“I can take it anywhere, on trails, on the street and on the sidewalk,” Paddock said.

Bruce Ostler agreed and said “It’s more fun to get around” because he can “take the sidewalk and skirt through traffic.”

Students said it is also easier to find parking for a moped than it is for a car.

“I have clinicals at the University of Utah, and it’s impossible to park a car, but you can park the moped pretty much anywhere,” Wyatt Connor said.

In addition to ease of parking, Connor also said he likes the spontaneity that comes with owning a moped.

“It feels like less of a commitment than a car,” Connor said. “I wouldn’t just go for a random drive in my car, but I would on the moped.”