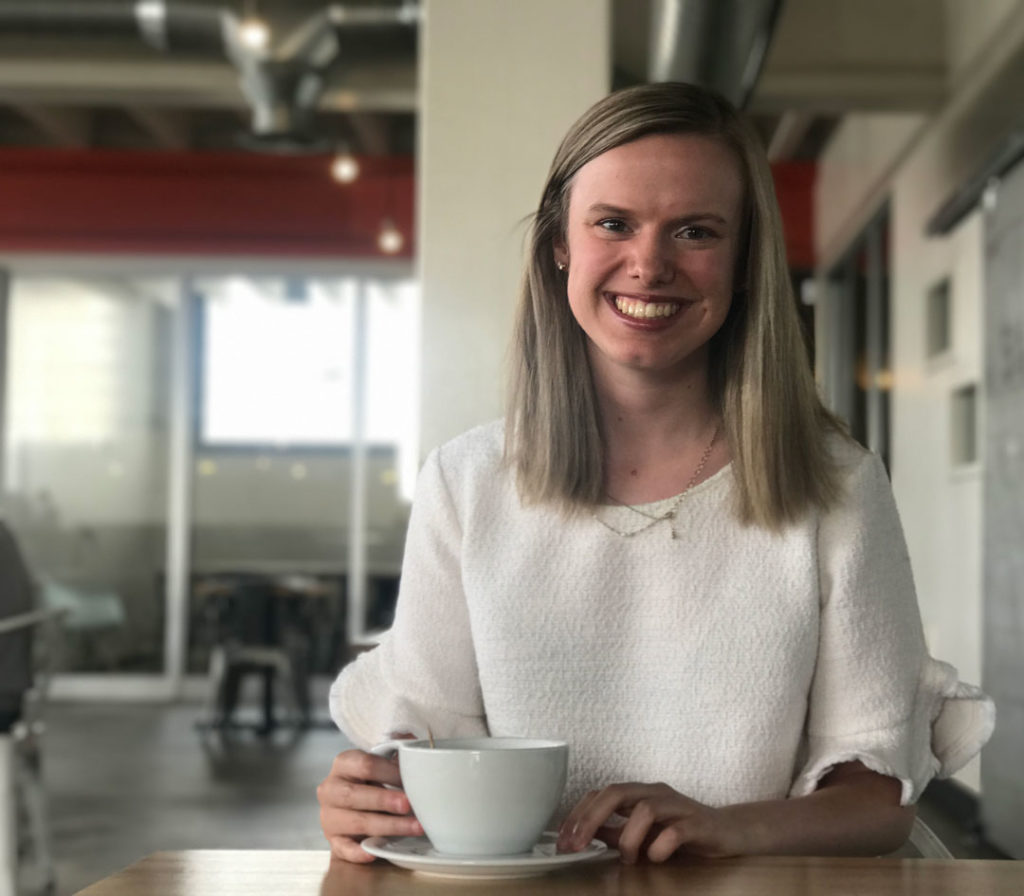 Hannah Williams, a Westminster College alumna, drinks tea at Publik Coffee in Salt Lake City on April 4. Williams is from Boise, Idaho, but when she graduated in 2016, she got a local job at Zions Bank instead of moving elsewhere — a choice nearly nine out of 10 Westminster graduates make. (Photo by Jacqueline Williams)

Salt Lake City’s unique landscape of metropolis and mountains, as well as Westminster College’s small class sizes and scholarships, brings the majority of the school’s of out-of-state students to Utah. But even after graduation, many of these students choose to stay in the area instead of going back to their hometowns or moving elsewhere.

About 86 percent of graduates in 2014-2015 were employed in Utah the year following graduation, according to Brianna Midgley, the director of the Career Center. That means nearly nine out of 10 graduates stay in Utah that first year — including students who came from another state.

“What is really nice about Salt Lake is that it’s all kind of compressed,” said Amanda Sevigny, a senior psychology major and outdoor leadership minor. “Like, you can be to the base of the canyon in 10 minutes and 10 minutes later you’re downtown enjoying the City Creek scene or something like that. So I think that’s a big thing for me — because it’s everything I want into a smaller, more manageable package.”

Sevigny, who is originally from York Beach, Maine, is planning to stay in Utah after graduation.

She’s not alone. Last year, the realtor.com economic data team found that Salt Lake City is the No. 1 place where millennials are buying houses. And in a 2017 Time article called “The 25 Cities Where Millennials Are Moving,” Salt Lake was ranked 14th.

Hannah Williams, a 2016 Westminster alumna, moved to Salt Lake from Boise, Idaho, her first year of college. After she graduated with a double major in economics and finance, she stayed in Utah to work with Zions Bank in community development.

Recently, Williams was accepted to graduate school at Columbia University in New York City. But after spending two years there to complete a graduate degree in nonprofit management, she said she hopes to return to Salt Lake City.

“The reason I want to come back to Salt Lake is because — I think it really has to do with Westminster,” Williams said. “I had such a positive college experience where I felt like I grew as a person and kind of came into myself. And I have so many positive connections with that experience and as a result, I have a positive connection with the Salt Lake area… And I’m an economics major, so there [are] other appealing factors to me, like the low unemployment rate and the low cost of living.”

Sevigny said the reason she plans to stay in Salt Lake after graduating in May is because she loves the diverse downtown feel combined with mountains in her backyard. But, she said, there are other factors to consider as well.

“I don’t want to go home,” she said. “That sounds really awful. I love Maine. I love my parents. I love my friends that I have left in my town. But it’s just not where I want to be. I don’t see work opportunities there for me in my hometown.”

CORRECTION: A previous version of this article said Hannah Williams plans to return to Salt Lake City after completing her graduate work. She has no definite plans to do so.