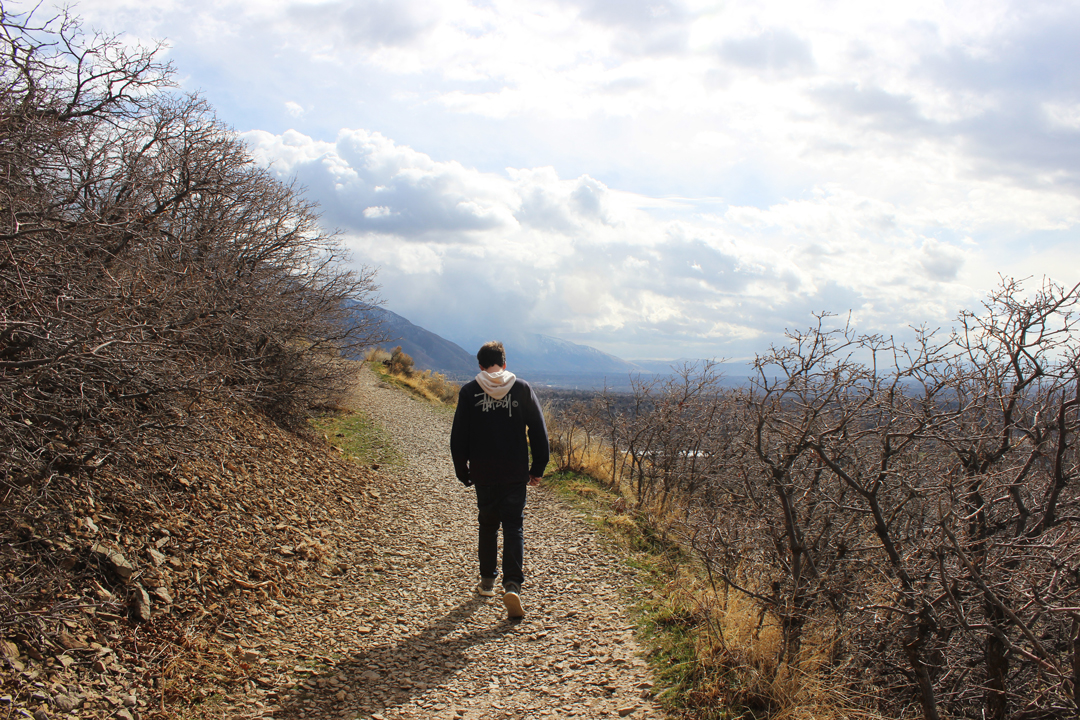 Patrick Marrinan, a junior outdoor education and leadership major, hikes on the Bonneville Shoreline Trail trail overlooking Salt Lake City during a windy afternoon. Marrinan fits hiking into his schedule as a form of physical therapy to rehabilitate his knee after he tore his ACL in a snowboarding accident. (Photo by Adrian Edwards)

When Patrick Marrinan, a junior at Westminster College, dropped off a cliff while snowboarding at Brighton Resort in December 2016, he knew he had too much speed. As he flew past the drop-off and landed, he heard a pop.

“My knee just shifted forward, and I heard a sound just like a rubber band snapping,” said Marrinan, an outdoor leadership major and entrepreneurship minor.

Afterward, Marrinan managed to snowboard down to the bottom of the hill and saw a doctor the following day.

“They told me I had a torn ACL,” Marrinan said. “I was done for the rest of the season.”

Marrinan also learned he would need surgery, though he decided to wait to complete the procedure until he was back home for the summer in Vermont.

“I figured recovering from that at home with the help of my parents would be easier than here in Salt Lake,” Marrinan said. “I didn’t really want to have surgery in the middle of the school year with everything else that was going on then.”

But Marrinan’s involvement in Westminster’s outdoor leadership degree and outdoor programs, as well as his career goal of becoming a backcountry guide, meant his recovery process needed to start immediately.

After resting all summer, he started physical therapy as soon as he returned to Westminster last fall with the hopes of healing his knee enough to continue pursuing the physical requirements for his major and to participate in his outdoor hobbies.

“Patrick handled his injury in almost the best way possible,” said Callum Aamodt, a University of Utah student and friend of Marrinan’s, who endured a similar injury. “I didn’t treat my knee properly, and it still bothers me to this day.”

The Forum sat down with Marrinan to talk about his injury and his recovery, as well as how both have affected his academic and career goals. This interview has been lightly edited for clarity and conciseness.

Q: Why is rehabilitation so important for your outdoor leadership major?

A: After college, I want to go work as a backcountry guide for a company like NOLS, so obviously it’s imperative to have both functioning knees. If I don’t do it now and kind of get [it] “good enough” for now, then later in life it will start acting up again and have issues and it will be a lot harder to deal with when I’m 40 than when I am 20. So getting [my knee healed] now is really important for the lasting strength.

Q: What have you been doing to strengthen your knee?

A: Physical therapy about three to four times a week, and I will usually go on a couple hikes throughout the week, as well, which really helps, too. I have been at physical therapy steadily now since mid August.

Q: What would you say has been your biggest struggle?

A: The hardest part has been just the amount of time I’ve had to take off. And having to hold myself back is really hard when all my friends are going up to the mountain and in group chats everyone is talking about, “Hey who is going to the mountain tomorrow? Who wants a ride?” and I’m just sitting on the couch watching TV. I am starting to get to the point where I am getting back into activities, so it is definitely nice to be able to be mobile again.

Q: What activities are you involved in?

Q: Do you have any advice to others making a similar recovery?

A: My biggest piece of advice would be to take it slow and don’t rush through things. It sucks enough going through this process once; it would be terrible to be at the eight-month mark, almost done, and re-tear it again to go right back to ground zero.