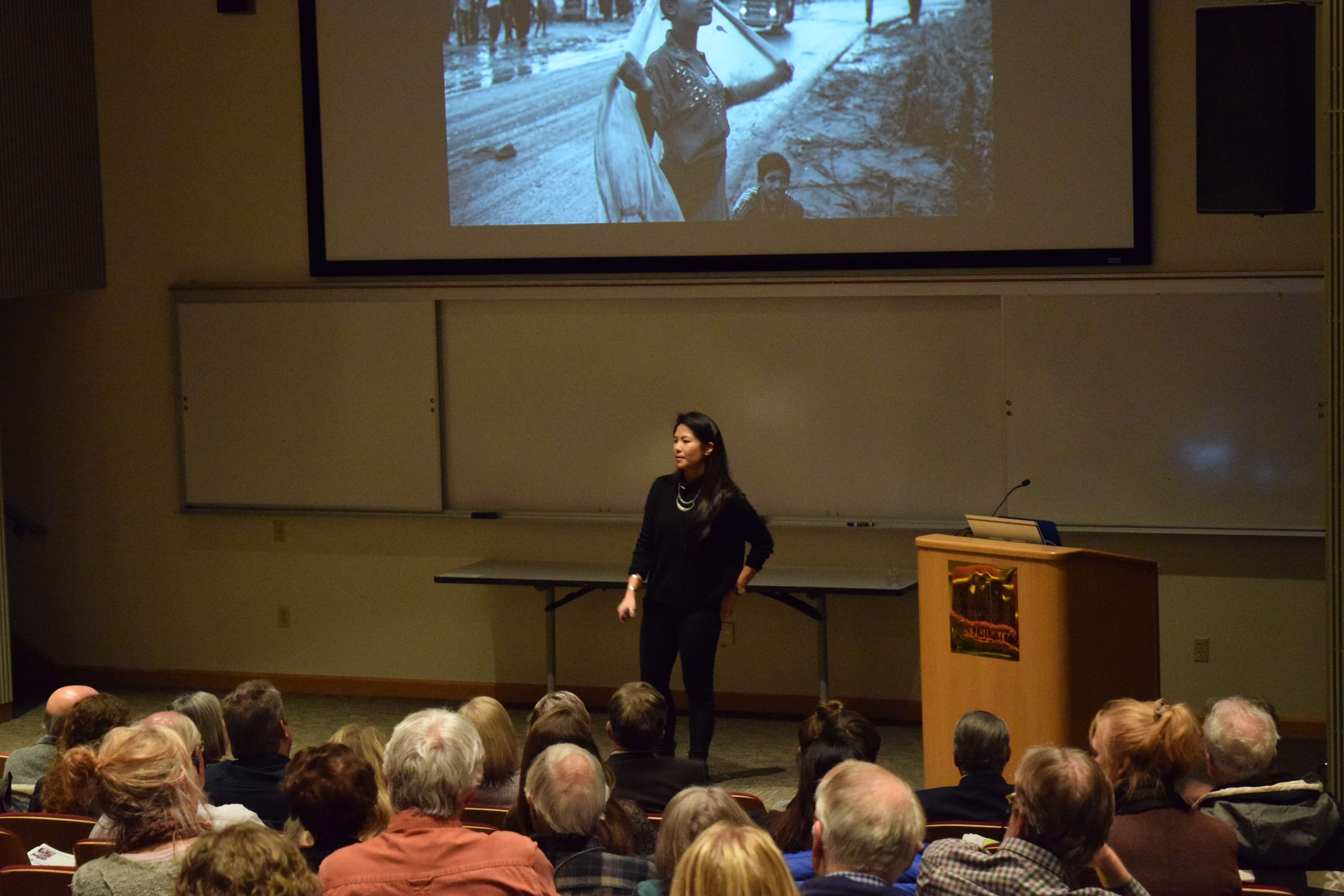 Photojournalist Nicole Tung opens the conversation for a Q&A near the end of her lecture in the Bill and Vieve Gore Auditorium on Tuesday evening at Westminster College. Tung, who visited Westminster as a guest lecturer for the Utah Center for Citizen Diplomacy, focused her conversation on how photojournalism can combat fake news. (Photo by Brenna Hart)

Within a national and international landscape marked by cries of “fake news” and distrust of the media, freelance photojournalist Nicole Tung says images are still powerful tools that have the potential to communicate the emotion and reality behind events across the globe.

But Tung, who visited Westminster College Tuesday as a guest lecturer for the Utah Center for Citizen Diplomacy, emphasized the importance of such work in its proper context.

“I definitely think [context] is more important now more than ever because you have to separate fact from fiction,” Tung told students in an afternoon discussion Tuesday.

After graduating from New York University, Tung said she bought a one way ticket to Libya. Since then, she has worked in war and conflict zones and was featured on the Netflix original documentary “Conflict.”

“You would hope that that emotion [of photojournalism] can break through the noise and the chaos of the other things that are out there.”—Karina Goffin, a Utah County resident who attended the evening presentation

In the era of fake news, journalists and photojournalists alike face skepticism about the validity of the stories they publish. That’s why Tung said photojournalism, like any other form of reporting, must rely on ethical practices.

“I think it’s important to have trusted journalists working on the ground, being able to verify fact and being able to disseminate the facts properly,” she said.

Shay Harris, a communication major at Westminster College who attended Tung’s afternoon discussion, said photojournalism may hold news organizations accountable for the factuality of their articles.

“[Photojournalism] could tell a story and show that it’s not necessarily fake news,” she said. “It can hold [news organizations] accountable for what it is they’re really doing.”

Fake news aside, audiences also face the problem of increased saturation in a world where news is everywhere, seemingly all the time, and it can be difficult for stories to stand-out amongst the crowd.

Karina Goffin, a Utah County resident who attended Tung’s evening talk, said she hopes photojournalism can solve that problem, too.

“You would hope that that emotion [of photojournalism] can break through the noise and the chaos of the other things that are out there,” she said.