The play follows the 1869 expedition of John Wesley Powell and his entourage down the Colorado River. This was not the first journey of its kind but Powell and his men were the first to float entirely through the Grand Canyon, according to the U.S. National Park Service.

While the expedition involved only men, “Men on Boats” is written to be comprised of an entirely female, gender-fluid and genderqueer cast.

“The entire cast is supposed to be anyone who is not a cis, white man,” said Melissa Salguero, third-year theater performance major and cast member. “It’s trying to subvert the colonial western expansion narrative.”

Director Mark Fossen said he had this in mind when he proposed the play to the college’s theater department.

“Theater needs to reflect our society, and we need to be empowering women’s voices,” Fossen said. “Theater, as much as it’s supposed to be this liberal field, still has an alarming lack of female playwrights, producers and directors. I want to see that stop, and I think that begins on the educational level.”

Prestigious theaters such as Shakespeare’s Globe of London have promised to update their casting practices to include more diversity in productions, according to The Guardian. This includes colorblind and gender-blind casting meaning the race or gender of a performer is not considered during the casting process.

“Take ‘Oklahoma!’ or ‘Carousel’ for example,” Salguero said. “They’re stock musicals. 1950s. Traditionally, they would be performed with all white casts. But now a lot of producers are like, ‘Nah, if you can sing the role, I don’t care.’” 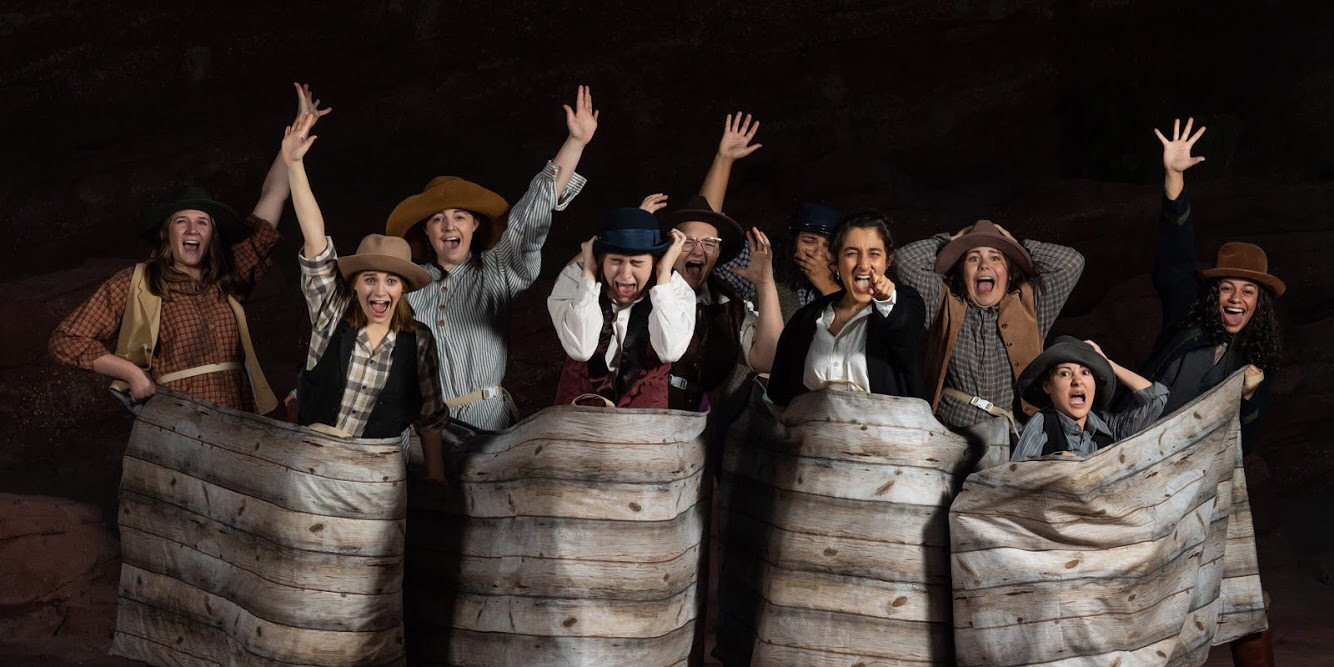 The full cast of Westminster College’s production of “Men on Boats” in a promotional image for the play in 2018. The play recounts the John Wesley Powell expedition but recasts all of the cisgendered, white and male characters as female, female-identifying or gender non-conforming performers as part of ongoing attempt to support diversifying theater as a profession. (Photo courtesy Max Rutherford)

While Fossen said that the play isn’t remarkably deep or insightful in nature, he hopes that audiences will take something away from it when they leave the theater.

“These stories can include everybody,” Fossen said. “And I think that’s what thematically we’ve been working on.”

Westminster student MacKenzie Cammack said she attended the play not only for its social intent but for the sheer enjoyment of live theater.

“I guess I just went to the play appreciating that it was an all-female cast but I was just trying to enjoy it not thinking about that aspect of it,” said Cammack, a third-year music major. “I think it shows the turn that society is at in terms of gender.”

Cammack said she attended the play to support a friend and that she left with both a greater understanding of history and appreciation for the college’s theater department.

“It was neat to see an all-female cast acting out an expedition that, at the time, was done completely by males,” Cammack said.

Director Mark Fossen said that he chose “Men on Boats” not only for social reasons but to engage the audience in a new way.

“All of the males in the expedition were cis, white males, and this should be done by anything but,” Fossen said. “Sometimes I think that if this play were being done by cis, white men, it wouldn’t be nearly as interesting.”

“Men in Boats” ran from Oct. 4-6 and 11-13 in the Dumke Black Box Theatre in the Jewett Center for the Performing Arts and Emma Eccles Jones Conservatory.