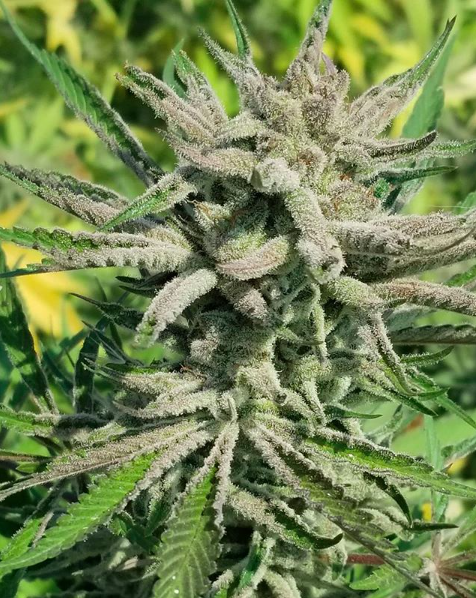 A cannabis leaf prior to processing at Buddies Brand, a distillery plant in Oregon, in Aug. 2018. Proposition 2, the medical cannabis initiative, is on the ballot for this year’s midterm elections, and the issue has divided Utah voters and the Westminster College community. (Photo courtesy Garrett Hunting)

Enedina Stanger, a 27-year-old member of The Church of Jesus Christ of Latter-day Saints and mother of two young children, was charged with child endangerment in 2015 because of her use of cannabis, also known as marijuana, to stop the pain caused by a rare disease.

Stanger was diagnosed with Ehlers-Danlos syndrome, a disease that causes the breakdown of connective tissues allowing bones to become dislocated with everyday movement.

Stanger’s felony charge was dropped to a misdemeanor and six months of probation, according to an KUTV article, and the Stanger family moved to Colorado, where they currently reside, so she could have access to legal cannabis.

“We have to give people hope. Medical pills aren’t giving people hope,” Enedina Stranger said in an interview with KSL. “There’s nothing to be ashamed for having to use a plant for medicine.”

Proposition 2, an initiative to legalize medical cannabis, is on midterm ballot in Utah this November.

If Proposition 2 passes, state-regulated dispensaries will distribute medical cannabis to patients. Individuals would need to be prescribed a medical card by a physician before they could legally use cannabis. A card holder could not smoke cannabis, but they would be eligible to buy 2 ounces of unprocessed cannabis or an amount of cannabis product with no more than 10 grams of THC or cannabidiol, according to Ballotpedia.

After 2021, individuals with medical cards would be allowed to grow six cannabis plants for personal use within their homes if there are no dispensaries within 100 miles, said said Alex Iorg, from the Utah Patients Coalition which is campaigning to legalize medical marijuana.

Utah voters are divided on the issue, with the most recent polls saying that two-thirds of voters are for legalization.

Advocates say cannabis has medical properties which can be used to treat various illnesses. For instance, cannabis helps with pain management, nausea and vomiting caused by chemotherapy and is an appetite stimulant, according to the American Cancer Society.

“For people who have the luxury to oppose passing the bill for medical use [….],  I would ask them to put themself in the position of these patients,” said Alex Iorg, campaign manager at Utah Patients Coalition. “Think about the difficulty of finding a medicine that works for you but being criminalized for using it.”

The Utah Patients Coalition submitted over 113,000 signatures of prominent individuals and companies in Utah in support legalizing medical cannabis.

“I understand the worry about legalizing cannabis is that everyone will become high bums, but you can buy alcohol in Utah right?” Hunting said. “Anyone can buy alcohol, but everyone’s not an alcoholic.” 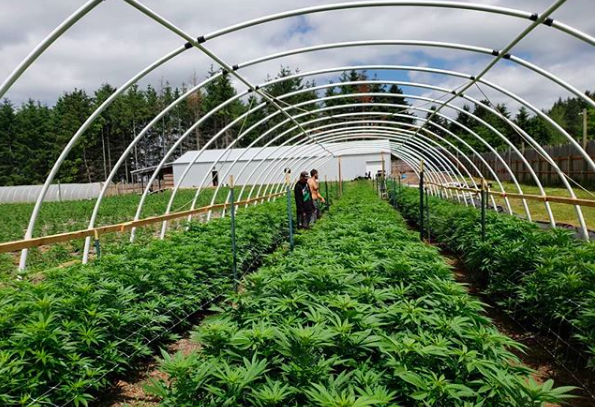 Workers walk through a field on a cannabis farm in Oregon in May 2018. Propositions 2, the medical cannabis initiative, has Utah voters and Westminster students divided with the midterm elections approaching this November. (Photo courtesy Garrett Hunting)

A coalition of medical experts, clergy, law enforcement, educators and business leaders released a statement on Aug. 23, opposing Proposition 2. This coincides with an official statement issued by The Church of Jesus Christ of Latter-day Saints to its members also opposing the ballot initiative.

Members of the coalition with support from the Church of Jesus Christ said Proposition 2 does not “strike the appropriate balance in ensuring safe and reasonable access for patients while also protecting youth and preventing other societal harms.”

A Utah Policy Poll from Sept. 17 shows a relationship between the Church of Jesus Christ’s opposition and voter opinion. Researchers found 25 percent of those polled said  the Church’s opposition had made them much less likely to support the Proposition 2 initiative.

The Church of Jesus Christ revised its official position on Sept. 18 maintaining their opposition to Proposition 2 and instead calling on lawmakers to pass medical cannabis legislation by the end of this year, according the Salt Lake Tribune.

Leaders of The Church of Jesus Christ said their main concern is that the ballot measure could allow recreational users to get marijuana but they want people who need medical cannabis for “truly medical purposes” to have access, according to the Deseret News.

Officials from the Church of Jesus Christ could not be reached for comment.

The website links to an opinion piece from The Week, an online publication from the United Kingdom, which says legalization in any form will lead to “pot tourists” and a “rising number of homeless addicts.”

Officials from Drug Safe Utah could not be reached for comment.

Westminster College community is also divided on the question of legalizing medical cannabis with students falling on both sides of the issue.

“To be honest I’d have to say I’m against it,” said Braxton Packer, a first-year business major. “A lot of research could be put into finding an alternative instead of legalizing marijuana.”

Other students said they support Proposition 2 because of the impact it could have on patients with chronic pain.

“I know people who struggle with medical problems, including my own parents,” said Jenna Masic, a sophomore nursing major. “[My parents] have never been ones to try [cannabis] but I think with the legalization of medical marijuana in Utah, they would want to try it because it’s legal.”

Some students said they support the legalization of medical cannabis but do not support its recreational use.

“I like the idea of having medical cannabis because it helps with medical stuff,” said Treasure Sibanda, a first-year aviation student. “But I wouldn’t want to be walking down the street and have everyone just smoking weed.”

Despite misconceptions, Proposition 2 only seeks to legalize the medical use of cannabis.

*This article was updated by Editor-in-Chief Stephanie Held and Managing Editor Marina McTee.