Puppies and politicians. To some it may be an odd combination, but to Westminster College students it is the best one. The Dumke Center for Civic Engagement held the second annual Political Puppies event on Tuesday in Richer Commons.

“We wanted to combine something Westminster students love with politics,” said Marley Dominguez, a political engagement coordinator at the Dumke Center. “As you know, our campus is really animal friendly, so we combined their love of dogs with politics. Making them feel more comfortable registering to vote, talking to candidates and understanding what is on the ballot.”

Dominquez and Lia Baez, political engagement coordinator at the Dumke Center, said they want students to not only vote but to also vote informed. They said people should research the issues and have an opportunity to talk with the candidates.

“We are actually apart of the campus cup, put on by the Lieutenant Governor’s office,” Baez said. “We are in the lead of registering people to vote. The last thing we need is people from Westminster is people to turn out and vote on Nov. 6.” 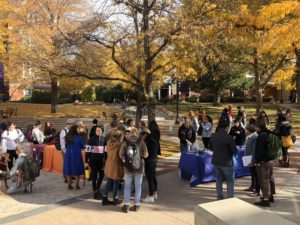 Dogs and local politicians join Westminster College students and faculty at the Political Puppies event Oct. 30 in Richer Commons. The event was hosted by the Dumke Center for Civic Engagement as a way to get students involved with the upcoming midterm elections. (Photo by Abi Breur)

To win, students must first register to vote using the school’s unique registration URL or register on your campus. Then use their school’s hashtag on Facebook, Twitter, or Instagram. Lastly, schools will compete in Expedition Vote, a scavenger hunt between the participating schools.

Candidates said they had different reasons for coming to campus to be part of the event.

Shireen Ghorbani, the Democratic candidate for the U.S. House District 2, said she wanted the opportunity to engage with young people and meet them where they are.

“It’s been great meeting so many individuals here today that have said they have already voted,” Ghorbani said. “There are so many things happening in our country right now that are really out of touch with what young people want to see and it is incredibly exciting to just meet so many individuals that are engaged in the process and ready to vote.”

James Singer, the Democratic candidate for the U.S. House District 3, said he was eager to meet and engage with young voters.

“I am an alum, I got my bachelor’s degree in sociology, my master’s degree in community leadership and I taught here as an adjunct [professor] for several semesters,” Singer said. “When they said there is going to be puppies at Westminster, I thought those are two of my favorite things, I gotta be there. It was an easy sale.”

Joseph Alvarez, a first-year student, said that the event was a good way to help people to make a more informed decision when they vote.

“I think it is important that students, especially now with the political climate, know what the hell is going on,” Alvarez said. “I am glad that Westminster takes the opportunity and time to really help the students understand the propositions, talk to the candidates and make sure that we have the best participation politically as possible.”

Kate Pasco, Honors civic coordinator for the Dumke Center, said that this year’s event had a great turn out and that the representatives that came to campus did a great job engaging with students.

“Overall I think the event is really powerful it puts a face to the name you see on a tiny piece of paper,” Pasco said. “It is definitely a really human experience to get to meet them and realize that they are a real person who could represent you and you can support them.”