Some Westminster College students have found a nontraditional stress-reliever, meditational form and workout through ‘flow arts’ — a genre of creative movement that gained popularity in recent years through festivals like Burning Man and EDC.

Arianna Wittel, a junior fine arts studio emphasis major at Westminster, said she first learned about the hobby from an old roommate and eventually asked for her own pair of poi (tethered weights) for Christmas a few years ago. Now, she said, she is hardly able to put them down.

“I just love the freedom I have and how I feel,” she said. “I feel beautiful and confident. I feel almost like my whole self when I’m spinning poi — I don’t have to pretend to be anything. I’m addicted to it.”

Psychologically speaking, “flow” is a mental state of operation in which someone is completely immersed in an activity, which often results in a loss of his or her sense of space and time. “Flow art” happens when that state is combined with dance and the use of props like hula hoops. 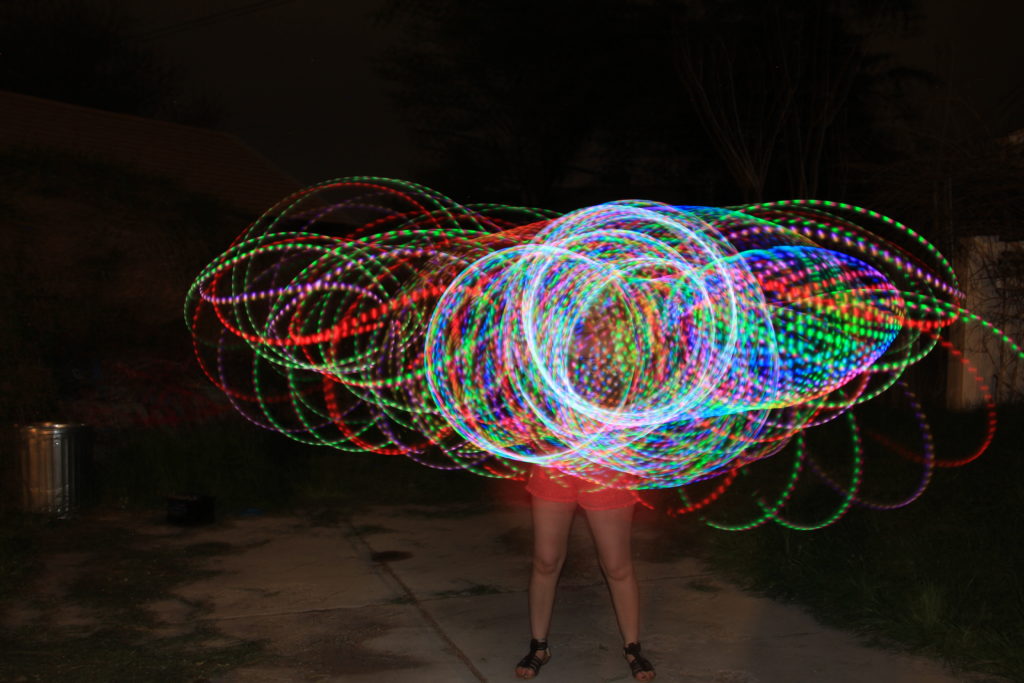 Mauri Martinez, a senior communication major at Westminster College, dances with an LED hoop to create this mesmerizing long exposure image at a friend’s home in Salt Lake City on April 27. This form of dance is known as flow art, a genre of creative movement that includes hula hooping (hooping), poi, staff spinning, fan dancing and juggling. (Photo by Hope Bloom)

Common forms of flow arts include hula hooping (hooping), poi, staff spinning, fan dancing and juggling. But all these creative expressions are constantly evolving as artists incorporate other movements from activities like yoga, martial arts, belly dancing and acrobatics. Props come in a variety of types, including LED, fire or simple fabrics and materials without any lighting effects.

Hula hooping was a fun childhood pastime for many, but Mauri Martinez, a senior communication major, has brought that hobby into her adult life. She had an innate passion for hula hooping as a child and didn’t realize until 2015, when she attended her first music festival, that the activity had evolved into a dance art form.

“It’s definitely a stress reliever and kind of like a form of meditation for me,” she said. “I don’t think about anything other than hooping when I’m doing it — my mind isn’t on school or whatever else is going on.”

Lauren Richards, who attended Westminster for a semester in 2016, echoed Martinez’s and Wittels’ sentiments about using flow arts as a form of meditation and stress relief and added that she feels empowered when she practices.

“It makes me feel beautiful and confident,” she said. “Hooping has become a really rewarding part of my life because it taught me patience through learning.”

Arianna Wittel, a junior art studio emphasis major, dances with Mauri Martinez, a senior communication major, with an LED hoop and set of LED poi in Wittel’s backyard in Salt Lake City on April 27. The two love practicing flow arts, a genre of creative movement that has gained popularity in recent years, and often experiment with one another’s props. (Photo by Hope Bloom)

Though there aren’t many students at Westminster who practice this hobby, the college has shown its support for performance art, Wittel said. ASW hosted an event on April 5 and and paid her to perform. She said she’d love to see the college host more events showcasing flow artists and allowing them to share their creativity with the Westminster community.

Martinez has found support for her passion beyond Westminster’s campus. In her hometown of Tooele, Utah, the city recently built a community recreation center and requested she teach hooping classes this June.

“I love teaching,” she said. “I think it’s really rewarding to bring [flow arts] to other people because it kind of brings you that self confidence and you get to watch other people grow in their own way.”

All the women agreed that flow arts are a way to get in tune with themselves and fosters a sense of confidence and creativity that may otherwise be untapped.

Wittel has used the art form to help her get through a tough breakup. Martinez said it helped her stay sane during finals. And Richards said flow arts have taught her a lot about herself.

“My journey learning to hoop helped me to grow and heal,” she said. “I encourage anyone reading this to explore these beautiful forms of expression.”