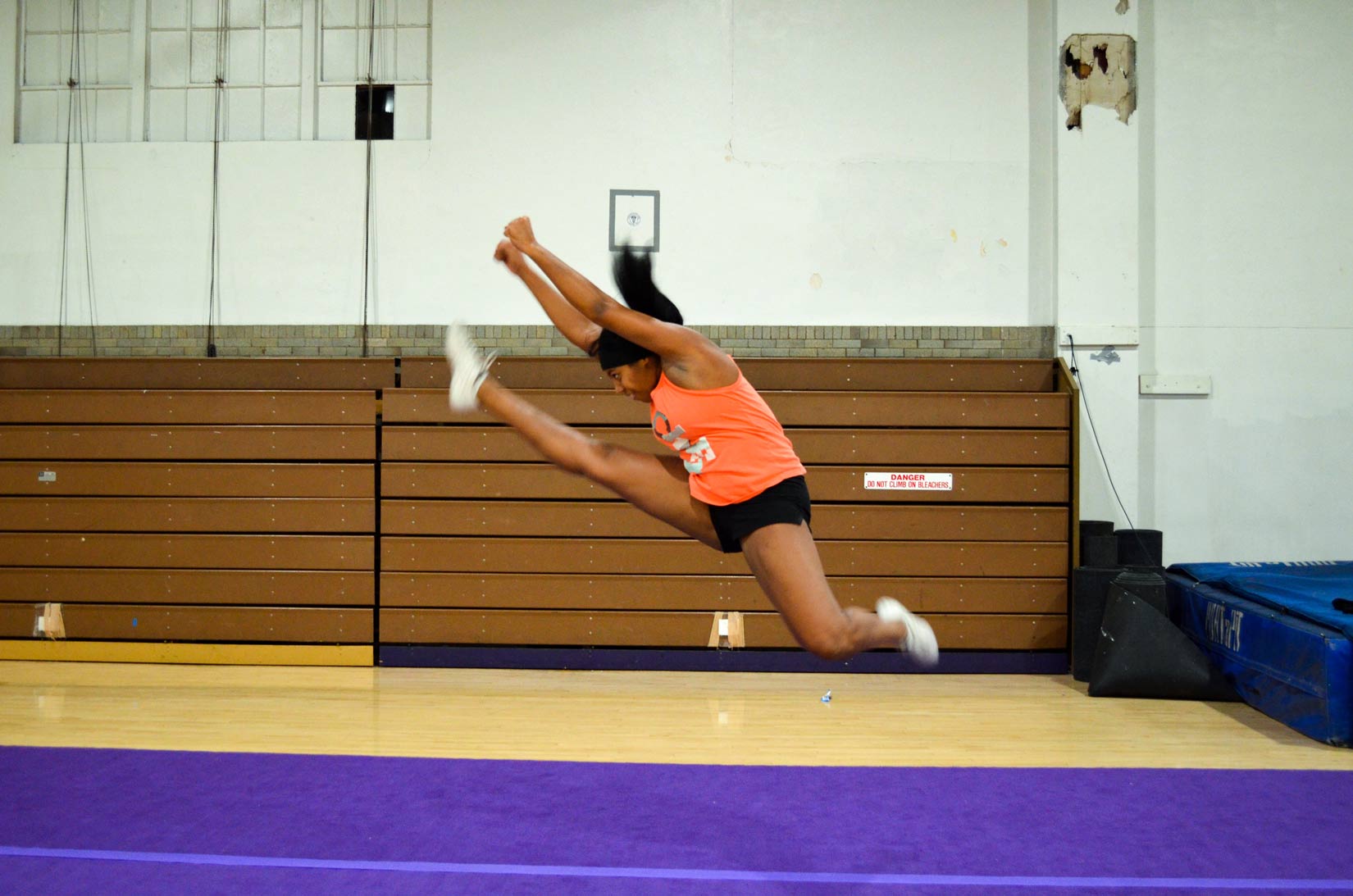 Jasmine McWilliams, a first-year student on the dance and cheer teams at Westminster College, practices in the Payne Gymnasium. McWilliams said she feels like she has missed out on some professional dance opportunities because of her physique. (Photo by Jacqueline Williams)

When Jasmine McWilliams, a first-year student on Westminster College’s dance and cheer teams, tried out for the Golden State Warriors, the Sacramento Kings and the Jazz Dance Team, she said she felt like she missed out on these professional opportunities because of her physique.

“So what I did is I trained harder, because that’s something that I’ve always wanted to do — that’s, like, my dream,” McWilliams said. “So I know people say you shouldn’t change due to what somebody wants you to do, but at the same time if that’s something you’ve been growing up on and you’ve been wanting to do, I just feel like I have to meet the expectations someway, somehow.”

McWilliams isn’t the only athlete at Westminster who said they want to meet the expectations of a coach or program — sometimes to the detriment of their physical or mental health.

College athletes are expected to help the programs they’re recruited for; in fact, they’re paid for their athletic skills in the form of athletic scholarships. Within this tough recruitment process, some athletes said they feel they’ve missed out on opportunities not because they the lack skills but because of their size or shape.

“I feel like I could’ve played in a higher level — not to be bragging or anything. Yeah, I felt like I was overlooked. –Denise Gonzalez, a junior on the basketball team

“I have the skill I just… but I just didn’t have the body type and I just probably wasn’t as strong as some of my teammates were,” Gonzalez said.

College athletes put their bodies through rigorous training and strict diets to stay in shape and be their best. Generally, athletes use professional help from weight and athletic trainers and nutritionists to healthily manage their body composition.

Often when a team comes into the athletic training room, Hackford said he hears athletes talking negatively about their weight, with comments like, ‘Oh, jeez, I’m gaining a lot of weight.’

When that happens, Hackford said he emphasizes the importance of trainers stepping in to educate those students.

“It’s just getting them to realize… why the changing is happening and making it a good thing rather than a negative thing, so that they don’t get set on that, ‘getting fat’ because the scale tells them that they are gaining weight.”

Some athletes at Westminster College said they struggle with body image when trying to fit the specific body type preference within their sports.

Madison Ingman, a junior on the lacrosse team, said athletes who have a different body type from the ideal for their sport have to work harder to stand out during recruitment compared to those who fit that ideal.

“I feel like I am a thicker person; I’m not very thin,” Ingman said. “I do feel like sometimes I felt a little pressured — like I should be thinner, I should meet those criteria more.”

Most trainers and National Collegiate Athletic Associations (NCAA) colleges follow guidelines and research from the National Athletic Trainers Association (NATA), which provides trainers with specific ways to help athletes monitor their body composition. Among other things, the research strongly suggests deemphasizing the importance of “an ideal body weight or body fat percentage.” 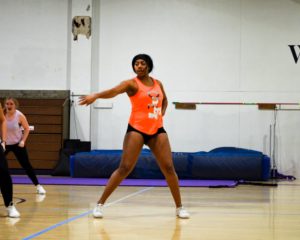 Jasmine McWilliams, a first-year student on the dance and cheer teams at Westminster College, practices with the dance team in Payne Gymnasium. McWilliams is one of several athletes at Westminster who said they want to meet the expectations of a coach or program— sometimes to the detriment of their physical or mental health. (Photo by Jacqueline Williams)

“I had coaches that said I need to, like, lose a little bit of weight,” said Amit Hefer, a first-year student on the soccer team. “And maybe they were right. Maybe that’s what they needed from me, like, for me to fit their program or…  the things that they want, you know?… Every player has a different body type. Every player can have the advantages or disadvantages because of his body type.”

“A lot of women think that they are too large, and that’s a societal thing you know?” Hackford said. “It’s brought on by advertising and TV and all that stuff… So you have to get them to look at what feels good. Make adjustments if you need to, but make sure that they are what [you] need and not the ones that society tells you you have to have.”

Hefer said soccer coaches in the United States tend to take athletes based on body type and look for tall, strong and fast players — whereas European leagues tend to look at skill first over body type. But Hefer said Josh Pittman, head coach of the men’s soccer team, models more of a European method of recruiting and coaching.

“I’m a small guy. And [Pittman] was like, ‘We prefer skill over size.’ And that’s the sentence that I wanted to hear.” –Amit Hefer, a first-year student on the soccer team

Pittman has 14 years of collegiate coaching experience and, as head coach, is in charge of recruiting players and making the final decision on who the team takes and who it offers athletic scholarships to.

But when Pittman was first starting out as an assistant coach, he didn’t have that kind of authority. That meant that oftentimes when he brought a potential recruit to the head coach, one of the first questions he was asked was, “How big is this kid?”

“I find it maybe a little bit old school where coaches think that just because you’re bigger, faster, stronger in the game of soccer it’s going to make you better,” Pittman said. “But I mean, I’ll take an extremely talented, skillful, intelligent young man whose speed of thought is greater than the ability to maybe run faster than other guys, and he’s going to help our program.”

Pittman said he sees results with his focus on recruiting for talent instead of for specific body type. Take his Freshman of the Year player, Hefer, who is 5 feet 3 inches tall. Though most of the other athletes Westminster plays against are bigger or taller than Hefer, Pittman said it doesn’t seem to phase Hefer at all.

“For a player like him, coming over from a different country, not knowing what college soccer is like, not knowing the physicality of the game and speed and strength… all these guys are big and strong and he’s adapting and goes, ‘I’m better and more skillful than everybody, and I’m just going to use that to my advantage,’” Pittman said. “And he does.”