With 1300 East under construction, students from Westminster College are dealing with increased noise, longer commutes and the heightened danger of living in a construction zone. 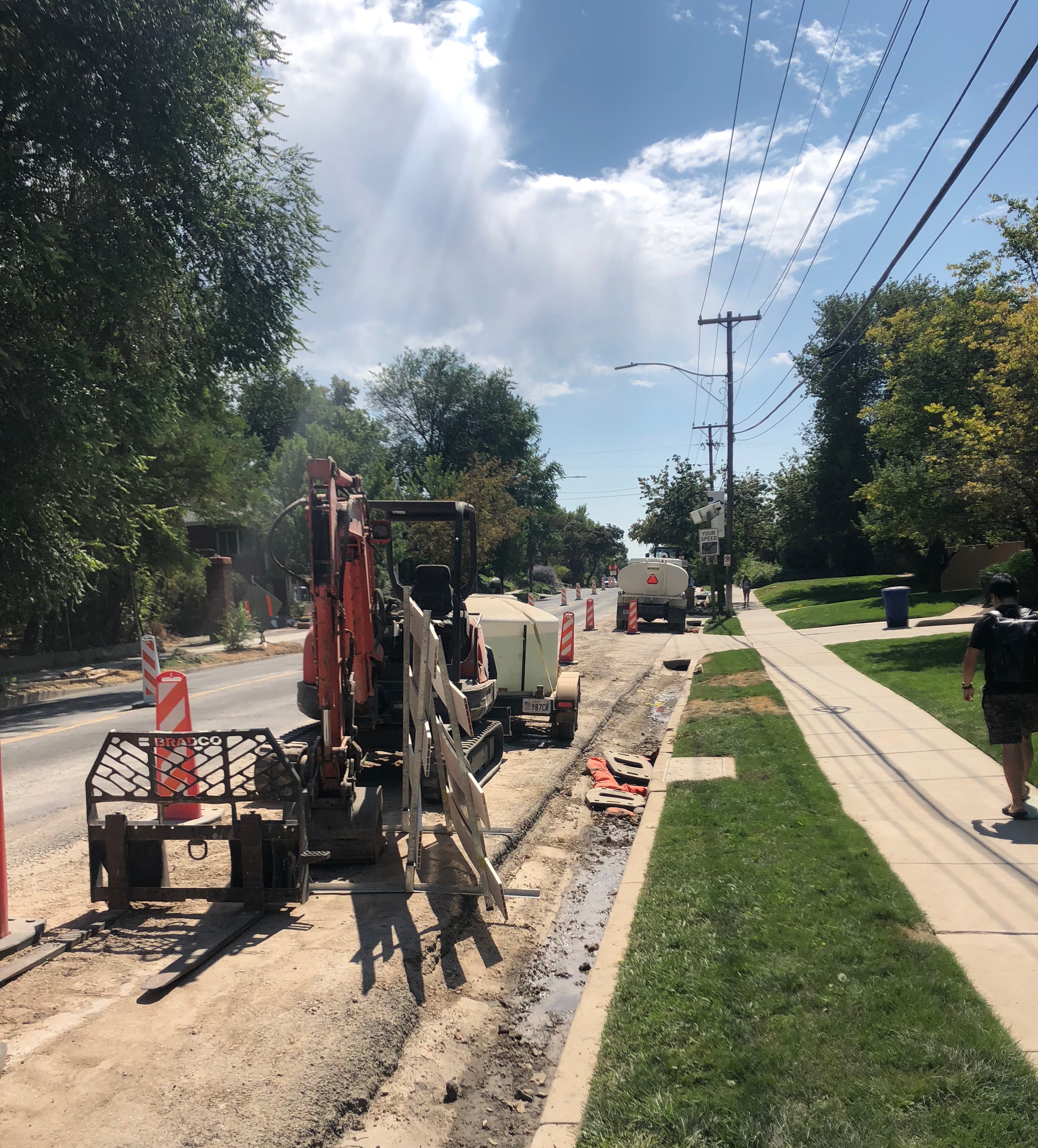 “The public utilities department is upgrading and replacing two water lines and upgrading the sewer line,” said Adan Carillo, a civic engagement specialist with the engineering division of Salt Lake City. “The two water and sewer lines are over 100 years old, so this project has been in the making for a while now.”

The $14 million investment is no small project. The work started summer of 2018 and is scheduled to be finished at the end of 2019, Carillo said.

This construction, however, has caused some disruption to the lives of students who live on or commute to campus along 1300 East.

Most of the construction is taking place during the night, which students living along the road say has disrupted their sleep.

“All I hear at night is the backup noise from the trucks and the loud machines,” said Erich Orellana, a senior business management major who lives in a student house next to the Dolores Dore Eccles Ceramic Center. “I wake up every hour or two to the different noises. They have these super bright lights on, as bright as daylight, shining into our house. Even with the blinds down, it’s super bright.”

“It keeps me awake and shakes our house,” said Connor Edson, a senior psychology major who lives along 1300 East. “I wish we would’ve had more information, been told when it is going to be loud and how long.”

Besides the noises that come from construction work, students said they are experiencing traffic related difficulties.

“I have to drive home on 1300 East and they close the road off on both sides at night,” said Daymian Vajda, a junior business major. “I have to park my car on Westminster Avenue and walk home.” 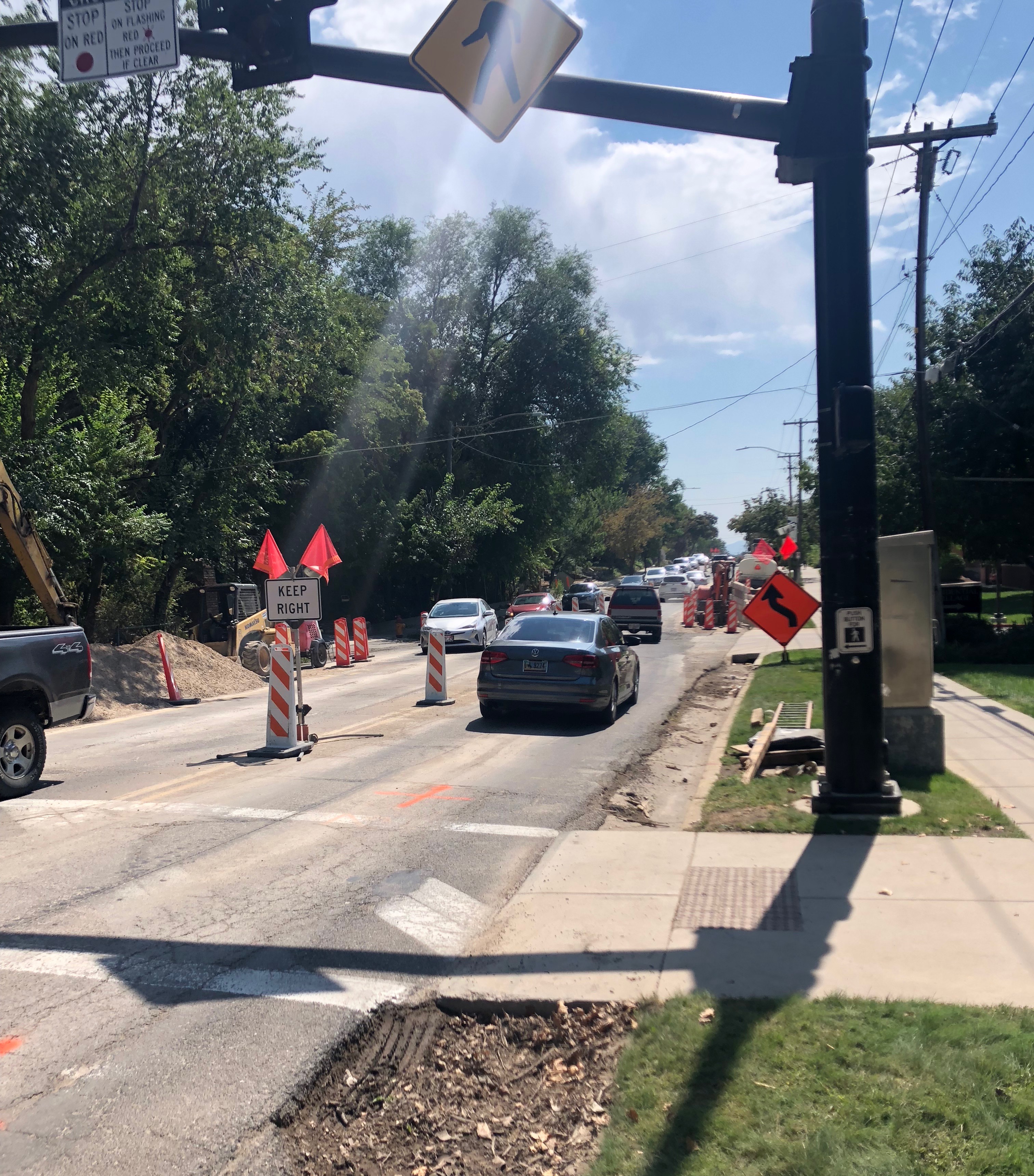 The large machinery blocking the view of oncoming cars and cones rerouting traffic all pose hazards to drivers and pedestrians, according to 1300 East residents. Students living on 1300 East said they must drive to their houses and leave their driveways with extra caution.

“Getting in and out is a bitch,” Orellana said. “They put the cones way too close, so that I have to super angle my truck. They have a big truck that has been there [on the road] for a while and I can’t see anything. Either way I turn to leave I can’t see what is coming.”

Students said they have to work with the construction workers to navigate the changing traffic patterns.

“We have to yell at them [construction workers] otherwise they won’t hear us over the construction,” Edson said. “We could go out but they have people stopped and if they let them through it would be an accident waiting to happen.”

Students said other unexpected consequences of the construction were issues with the water supply.

“All the water coming out of our faucets was brown,” said Emma Thompson, a junior technical theatre major and Spanish minor. “We put them on full and had them run through and see what happens. It was fine after that, but then the water would sputter at times and make these gross sounds. I told the landlord and he called the plumber, they say it is probably from the construction.”

Getting new water lines will be nice in the long run but dealing with the immediate effects is not pleasing, Orellana said.

Although students have agreed the construction has been annoying, the impression left by the workers has been mixed.

“One guy came to our house late at night and asked if we could flush really quick to see if it was coming out brown,” Orellana said. “Twenty minutes later, another guy knocked on our door […]. He asked us to go flush again and keep the sink on for a while. He was just super weird and obnoxious.”

Others said that the workers were nice making them feel more inclined to be patient with them.

“The construction guys are nice though, I talk to them sometimes,” Vajda said. “A couple homies out there.”

“My hope is that they are almost done with this part,” Edson said. “And they move through and bother someone else.”