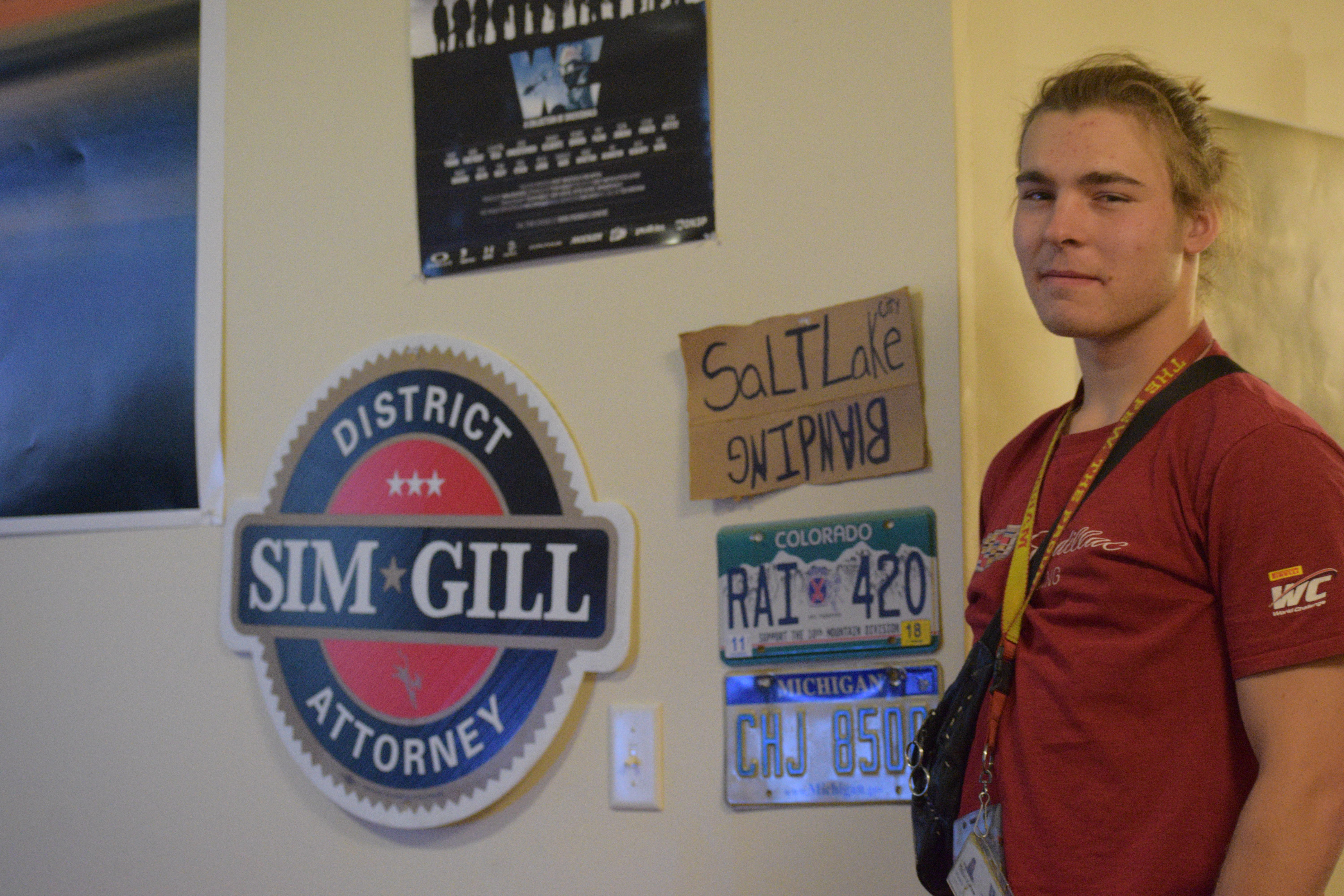 Cason Konzer, a sophomore math major, spends time with his roommates in their apartment on Sept. 14. Konzer works a 4 a.m. to 8 a.m. shift at the Salt Lake City international Airport to help pay for college. (Photo by Sebastian Durante)

It’s 3 a.m., and while most other college students are already asleep, Cason Konzer is shutting off his alarm clock and climbing out of bed. Konzer, a sophomore math major, works at the Salt Lake City International Airport unloading cargo planes on the tarmac. His shift starts at 4 a.m.

“Sometimes when I’m up late he’ll get up and say ‘I am heading to work’ and I think to myself, wow I haven’t even gone to bed yet,” said Konzer’s roommate Luke O’Brien, a sophomore sports management major.

People in the United States collectively owed 1.3 trillion dollars in student loans in June 2017, according to a Pew Research Center study. This is two and a half times more than what they owed a decade earlier and it coincides with rising costs of higher education, researchers said.

Like many Westminster students, Konzer said he is aware of the high cost of college tuition. He said he balances his time between school and work to get ahead on paying back student loans.

While his situation is similar to his peers, most student do not work the unusual hours Konzer has worked for the past year.

The Forum spoke with Konzer about his job at Salt Lake City International Airport. His answers have been lightly edited for clarity and consciousness. 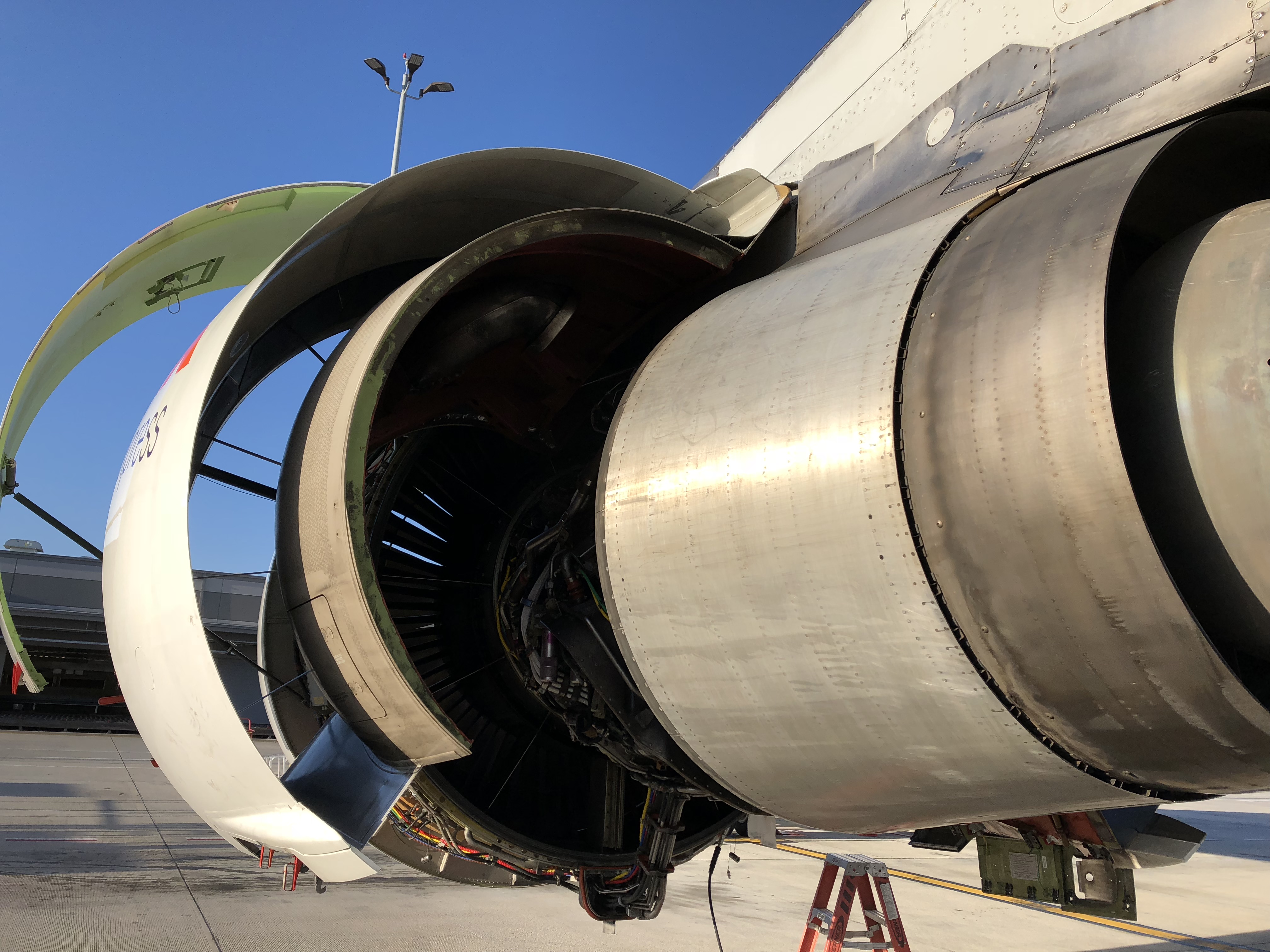 A jet engine on the tarmac at the Salt Lake City International Airport on April 27, 2018. Westminster College student Cason Konzer works an overnight shift at the airport unloading aircrafts for Fedex to help pay for college. (Photo courtesy Cason Konzer)

Q: You work to help get yourself through school, but your job is slightly out of the ordinary. What do you do and where do you work?

A: I work at Salt Lake City International Airport. I work with Fedex. I load airbus planes, MD11s, and feeder aircraft which are smaller propeller planes, and do loading and unloading of packages. Pretty much everything that goes through the Salt Lake Fedex Air comes through us, so we move all of that freight. Personally, I am mainly hauling trailers, so towing dollies, and bringing freight from one plane to another.

Q: You’re working right on the tarmac, what clearances does that require?

A: In order to work on the tarmac, you need a SIDA [Security Identification Display Area] badge. This is the same type of badge you’re gonna get in the aviation program. If you are gonna be a pilot that flies or be on the ramp at any time, you’re gonna need a SIDA badge. You get it through Salt Lake International Airport. And personally, my badge is the second highest clearance you can get other than being a pilot, and additionally I can drive vehicles on the ramp and escort people on the tarmac.

Q: How many hours do you work per week and when?

A: Right now, I work around 25-30 hours per week, so part time. I work from 4 a.m. to 8 a.m., and that is flexible so sometimes it runs later. Usually 8 a.m. is the earliest I get done. Last year, I worked 45 hour weeks working night shifts as well so this is definitely a cut back, but it’s something that is going to help me pay for college and without it I wouldn’t be going to school.

Q: Was it difficult for you to adjust to this schedule of working so early in the morning?

A: Yeah, when I first started working nights I definitely slept through a lot of classes and didn’t sleep enough, sometimes I would go a day and a half, even two days without sleep. I probably did that once a week to be honest. Now that I’ve been doing it for about a year, I’ve got it down pat pretty good, and I still manage to get six to eight hours of sleep.

Q: How do you manage to work this job and still succeed in school or have a social life?

A: The whole balancing act is kinda crazy, and I’ve talked to a lot of people about it but, the main thing is you don’t have a lot of time for extracurriculars. Don’t be planning on playing sports, cause you won’t have the time to do it. You gotta make time for homework […]. But with that said, getting most of your homework done ahead of time, getting it done in class helps balancing. A lot of the time homework takes a lot less time then we make it out to take. If you do it ahead of time you are usually good to go.

Q: How do you feel about the expense of higher education driving you to maintain this schedule? Would you still do it if college was free?

A: If college was free I would not work nights. I would work part time locally. I could walk, skate or bike too. I wouldn’t need to make as much money as I do now, but that being said it is nice because Fedex gives me a tuition reimbursement every year.