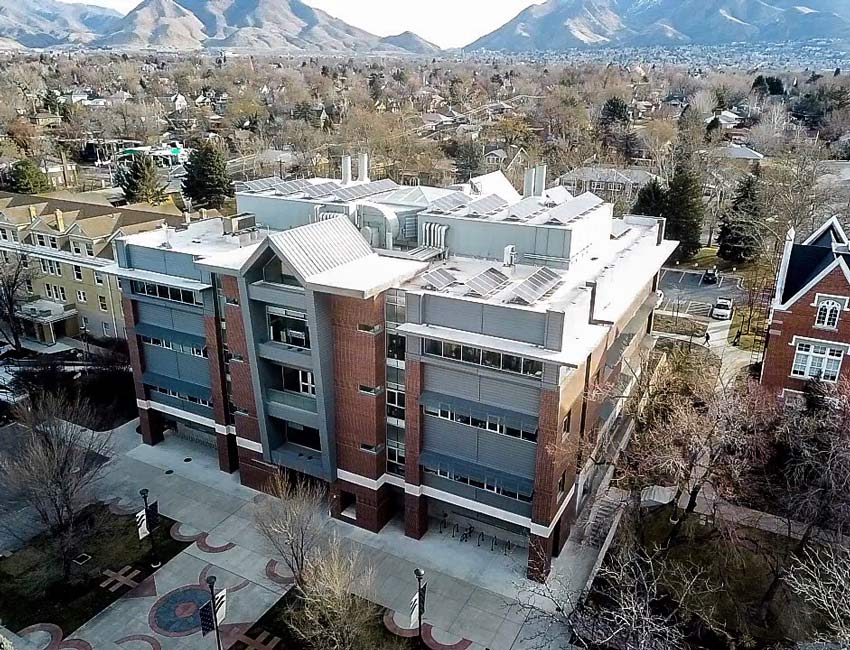 An aerial view of the Meldrum Science Center at Westminster College, where many of the buildings were built before earthquake safety regulations were put in place. “Depending on the location and severity of an earthquake, this might not exist,” said Jonathan Amburgey, a psychology professor, referring to the Meldrum Science Center and Westminster. (Photo by Berin Klawiter)

Students and faculty at Westminster College are working to better prepare for the possibility of a 7.0-magnitude earthquake on a campus where many of the buildings were built before earthquake safety regulations were put in place.

Westminster sits on the Wasatch Fault, which is part of the Interstate Seismic Belt. Utah has the highest seismic activity along the belt, which runs north to south in Idaho, Montana, Wyoming, Utah and Arizona, according to the United States Geological Survey.

“Depending on the location and severity of an earthquake, [the Meldrum Science Center and Westminster College] might not exist.”

Amburgey and other faculty and students have been working since Spring 2015 to spread awareness about earthquake risks.

The team launched a survey focusing on how prepared certain demographics are for the dangers and found that many people who grew up in a state with a great seismic risk knew what to do in an earthquake but that others were unprepared.

“[We want to be] making sure that faculty, staff [and] students on campus know about the hazard and know about the risk,” said Tiffany Rivera, a geology professor on the research team. “Knowledge is the first step. If you don’t even know that the hazard is there, you can’t make any efforts to prepare yourself.” 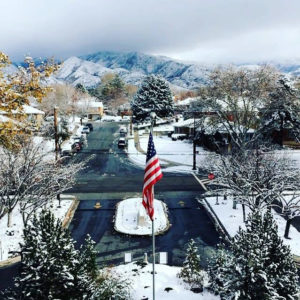 A view from Converse Hall at Westminster College where students and faculty are working to better prepare for the possibility of a 7.0-magnitude earthquake since many of buildings were built before earthquake safety regulations were put in place. (Photo by Makayla Kirk)

The earthquake preparedness team plans to work with Westminster’s Risk Management department to alert campus to possible hazards and to eliminate dangers by bolting down cabinets, properly storing chemicals, etc. These are the behind-the-scenes items most people wouldn’t even think about, Rivera said.

To prepare for an earthquake, every person on campus should have an emergency prep kit, according to Bri Buckley, director of campus safety. This kit should include food, water, sanitary supplies, a flashlight, radio, gloves, dust masks, medications, cash and a list of contacts.

“In the event of an emergency situation, your first priority is to survive the earthquake and then check in,” said Bri Buckley, director of campus safety. “To do that, you use the strategy called drop, cover, hold on and you would modify that according to circumstances and ability. Drop to the floor as closely as possible to make your way under a sturdy desk or table — some sort of shelter and to hold on to it.”

Students, faculty and staff should next check in through the emergency notification system to tell campus safety officials whether they are okay, Buckley said.

Meeting in designated safe spots is another way for authorities to tell who is safe on campus, Buckley said. The four meeting spots are Dumke Field, the Foster Hall parking lot, Douglas Street and the Sugar House duck pond. These spots are for a low-magnitude earthquake. Other spots would be designated at the time of an earthquake based on its magnitude and severity, Buckley said.

Utah has an annual statewide earthquake drill in April. During the Great Utah ShakeOut, students and faculty who opt into the emergency notification system will receive an email, a phone call and a text notifying them of the drill. People on campus should take drills seriously to be better prepared for the actual event, Buckley said.

This year’s drill is April 19, and the Earthquake Research Project team and office of Risk Management encourage all students, faculty and staff to participate to better prepare themselves for an earthquake to strike.