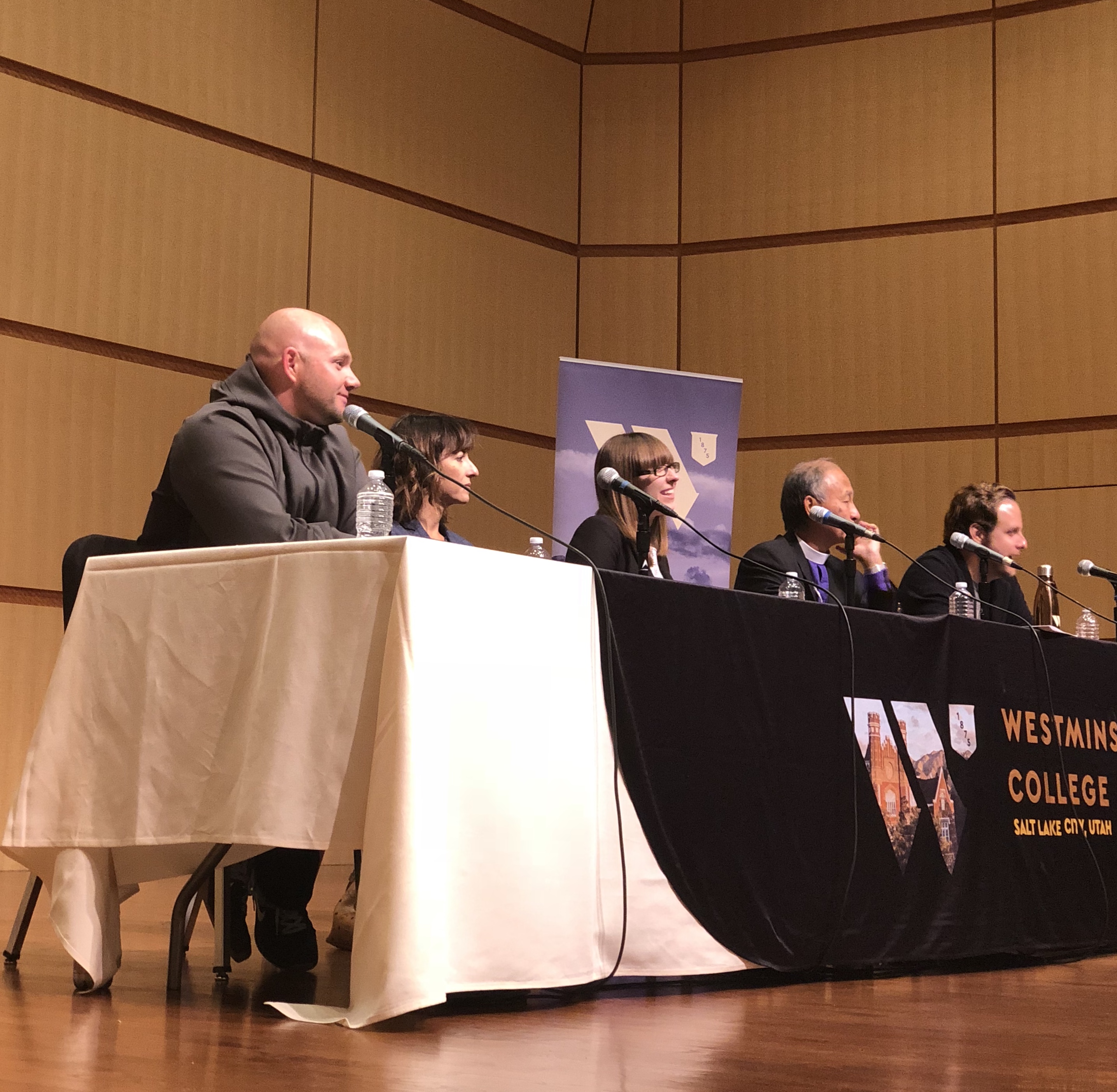 Nate Walkingshaw, Kristine Edde Johnson, Nicole Bedera, The Right Reverend Scott B. Hayashi and Ray Bradford (left to right) talk among themselves at the inauguration symposium in Vieve Gore Concert Hall Sept. 28. The symposium, including a keynote address and the panel, addressed the question of “Which Values Will Endure in a Digital World?” and was part of the inauguration celebrations for Westminster’s new president, Bethami Dobkin, PhD. (Photo by Oakley Matthews)

A keynote speaker and five panelists, from different fields and backgrounds, discussed the ethical questions surrounding society’s use of technology and agreed it needs to be used to improve lives, not damage them at the inauguration symposium on Sept. 28.

The symposium titled “Which Values Will Endure in a Digital World?” was part of the weekend-long celebrations of Bethami Dobkin, PhD inauguration as Westminster College’s 19th president.

Panelists Nicole Bedera (‘14), Ray Bradford (‘07), The Right Reverend Scott B. Hayashi, Kristine Edde Johnson and Nate Walkingshaw and keynote speaker Amy Loomis, PhD addressed what role higher education has in not only preparing students to live and work in digital environments but also to critically understand and align those environments with a commitment to human dignity and equity.

The symposium began with the panel discussion moderated by Assistant Professor of communication Erin Coleman followed by the keynote address from Loomis.

Participants answered questions regarding the work they do in their fields, and how that work is building empathy and connection in the digital world.

Each of the panelists discussed what their sense of purpose was in their work. Although the purpose for each individual’s line of work varied, one thing they all said was that they cared for their audience and how their work influences that audience. 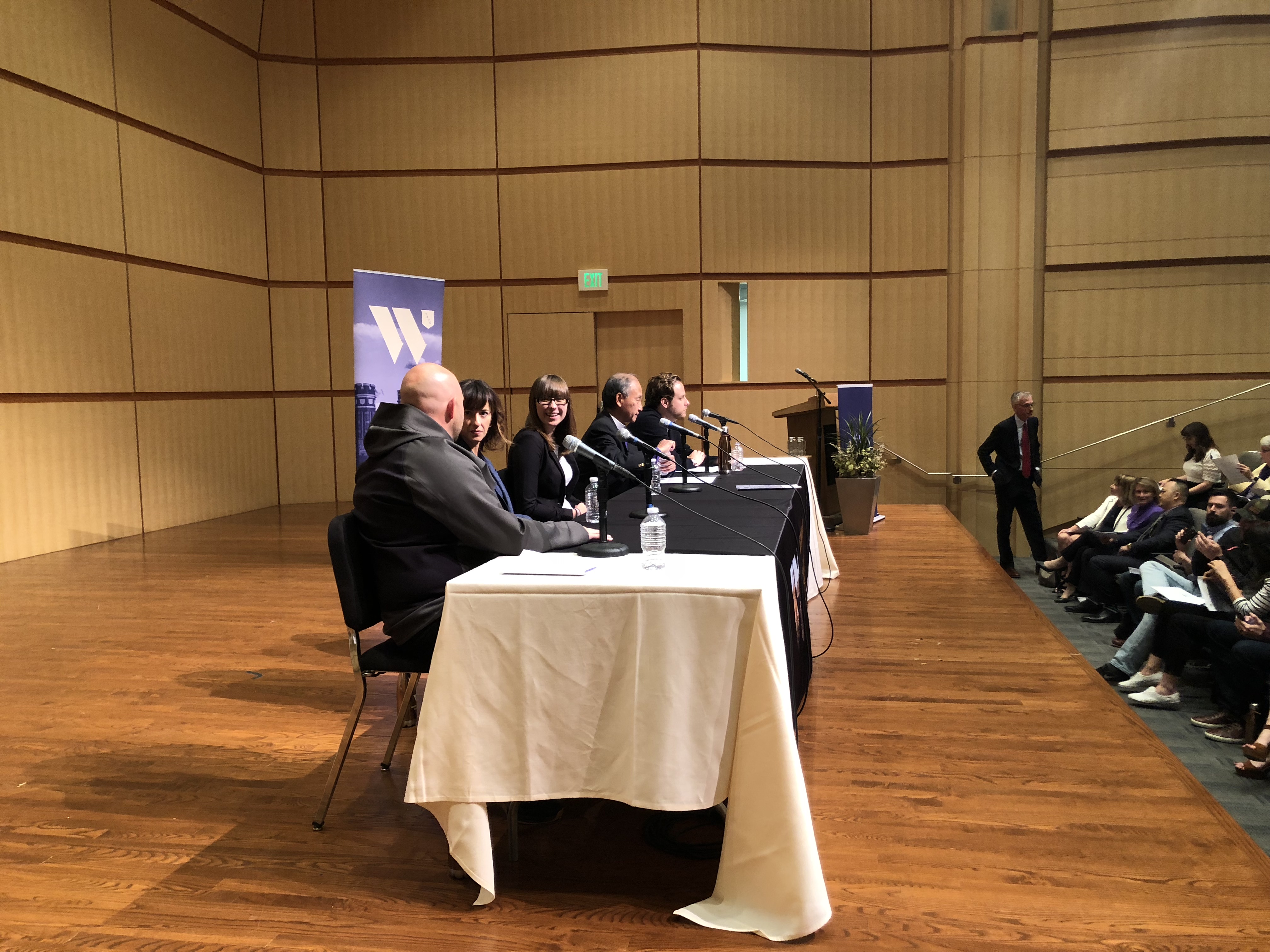 Nate Walkingshaw, Kristine Edde Johnson, Nicole Bedera, The Right Reverend Scott B. Hayashi and Ray Bradford (left to right) talk among themselves at the inauguration symposium in Vieve Gore Concert Hall Sept. 28. The symposium, including a keynote address and the panel, addressed the question of “Which Values Will Endure in a Digital World?” and was part of the inauguration celebrations for Westminster’s new president, Bethami Dobkin, PhD. (Photo by Oakley Matthews)

“My sense of purpose comes from taking the technology, whether it’s very complicated, high-end technology or something much more easy to grasp, and to translate that to my audience,” said Kristine Edde Johnson, a lawyer that concentrates on intellectual property litigation, particularly trade secret litigation and patent infringement. “I have to find ways to convey my case in an understandable form that different types of people [in the courtroom] can understand.”

Nate Walkingshaw, the chief experience officer at Pluralsight Inc., also said the use of technology was a main area of focus of his work as he oversees the company’s engineering, content and author teams.

“My purpose is human-centered design,” Walkingshaw said. “Trying to build and teach teams how to build and empathize moral and ethical products that reach millions of people.”

The panel concluded with the panelists reflecting on their commitment to ethical and moral decision making in their field.

Assistant Professor Coleman asked the group, “What values do you see as being threatened in this risked society that compromise your dignity and equity and how do you maintain or create resilience?”

Nicole Bedera, a PhD candidate in sociology at the University of Michigan and graduate of Westminster’s Honors college, said she’s developed resilience to match the obstacles she’s had to face.

“When I’m thinking about the things that threaten our ability to be resilient about the risks we’re facing, I want to destroy those things,” said Bedera, who studies sexual violence. “Those things force us to be resilient, especially as we are facing challenges that we don’t have as much individual control over.”

“What’s at risk is our agency,” said Nate Walkingshaw, CXO Pluralsight Inc. “Our ability to choose right from wrong is at stake because of the science and engineering behind these curated feeds that are giving us streams of information that take away our ability to make clear decisions.”

Loomis focused on the large role technology plays in everyday lives and addressed the question of how higher education and the liberal arts play a critical role in defining the social, moral and intellectual foundations of digital leadership.

“Digital technology is transforming our day to day lives, the way we work, the way we communicate,” Loomis said. “We need to move away from thinking that higher education today is still being used like our parents and grandparents educations were.” 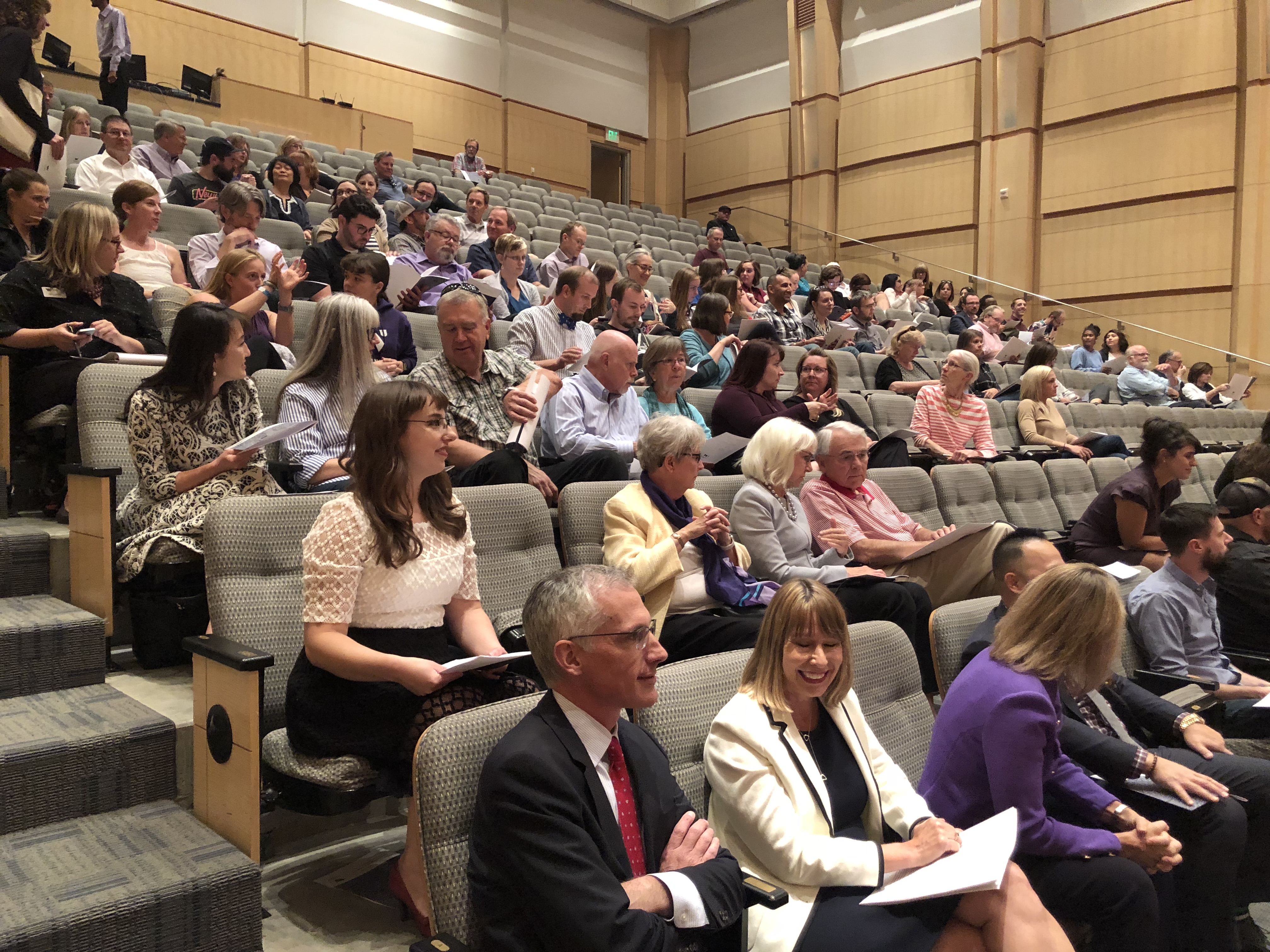 Audience members including Assistant Professor of communication Erin Coleman, President Dobkin, PhD and keynote speaker Amy Loomis, wait to begin the inauguration symposium in Vieve Gore Concert Hall Sept. 28. The symposium included a keynote address and panel discussion on the question of “Which Values Will Endure in a Digital World?” and was part of the inauguration celebrations for Westminster’s new president. (Photo by Makayla Kirk)

In Loomis’ speech, she said 89 percent of the population in the United States is regularly accessing the internet and that it has completely redefined what classrooms look like today.

She said we are in an era of constant learning, and as technology integrates even more into our ways of living and working, there needs to be more awareness of human moral and the social complexities of life.

One audience member Miriam Miller, a sophomore neuroscience major, attended the symposium and said she didn’t expect how the symposium ended up being.

“I was expecting to hear a conversation about how we use media in education, but I enjoyed the content more than I imagined because it was geared towards how we create media and digital platforms that serve the community from a moral and ethical basis,” Miller said.

Each individual who spoke at the symposium agreed that the work and the data that comes from each line of work needs to be used to improve the lives of our society, not to damage them.

“Data in the digital age needs to be used to enrich communities, enrich designs, enrich experiences,” said Ray Bradford, founder and CEO of Spruce Health. “Data should not be used to prey on users as a form of power.”