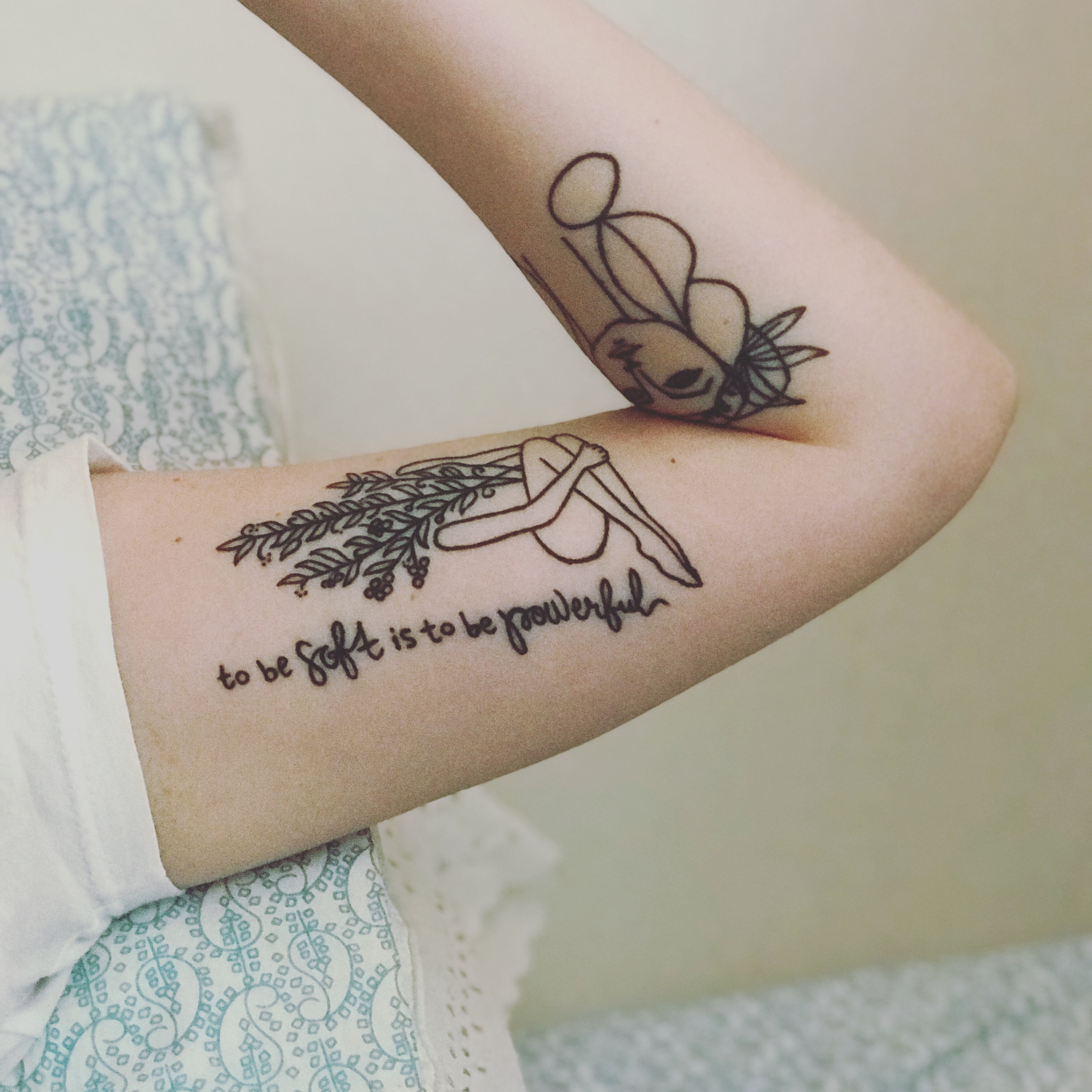 Reilly Cronyn, senior English major, got a line drawing of a woman tattooed on the inside of her arm in the spring of 2018. She said that tattoo is a visible and permanent reminder that it is okay to be emotional and vulnerable. (Photo courtesy Reilly Cronyn)

“I have a wishbone behind my ear which is for good luck,” said Jessica Garvin, a junior elementary education major. “I have awful luck with life in general and I have a lot of health problems. Also, my parents would always give my sister and I the wishbone to break, so it has a nice memory attached to it.”

Garvin said she got her first tattoo a few months after she turned 18, and now has a total of five tattoos; one behind her ear, on her ankle, on the inside of her arm, on her shoulder and on her shoulder blade. She said that she gets tattoos to express herself in an artistic way and to remember positive memories.

“There is a semicolon on my ankle with a heart as the dot, it’s for mental health awareness which is a big part of my life,” Garvin said. “A semicolon represents a lot of things including a pause instead of a stop. I have dealt with suicide in many ways with family members and friends.”

Not all of her tattoos have to have deep personal meaning, said Garvin. Her most recent tattoo is called the “Bermuda carnation triangle”and said she fell in love with the beautiful design because of the lines and the detail of the flower.

Some students said they get tattoos to remind them of their travels. Caz Woodall, a sophomore physics major, has a compass tattoo to commemorate traveling abroad for his senior year of high school.

“I got my tattoo to represent my travels around the world,” Woodall said. “And to always remind me to keep discovering new things.”

Woodall said he came up with the design himself and is waiting for inspiration for his future tattoos.

Senior English major Reilly Cronyn said she started getting her tattoos as a roadmap to the story of her life. 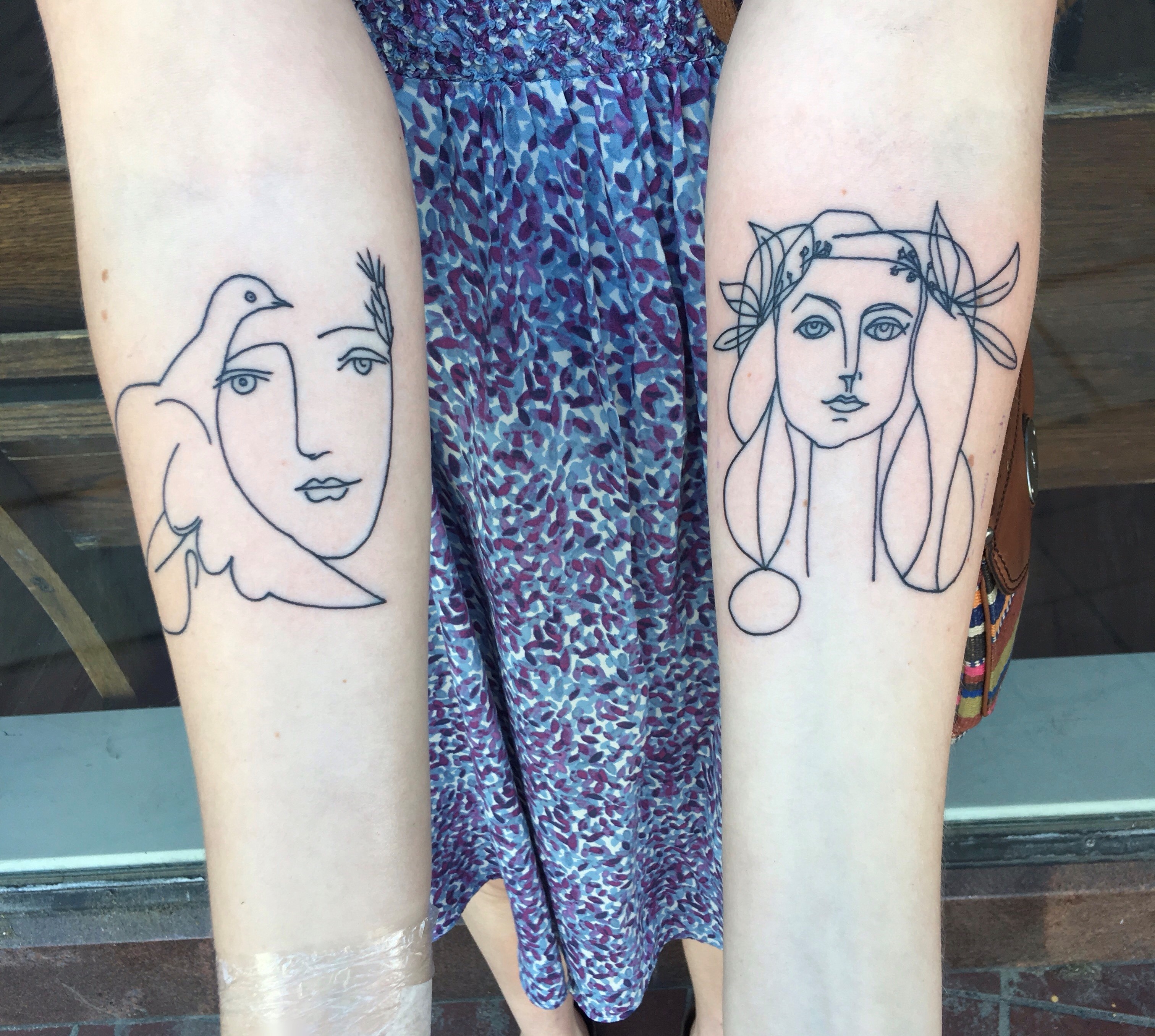 “Everything I put on my body is there for more than just aesthetic reasons,” Cronyn said. “I’ve been through a lot already in my life, and all of [the tattoos] represent who I am and who I want to be in some way or another.”

“This tattoo serves as the main reminder to me that I can go through tough shit, but I’m still here,” Cronyn said. “I survived. I lived.”

She said another one of her favorite tattoos is a line drawing of a woman with lavender and leaves, paired with the phrase “to be soft is to be powerful.” The quote is from one of Cronyn’s favorite poems and it is written in her childhood best friend’s handwriting. According to Cronyn, it is a visible and permanent reminder that being emotional and vulnerable is okay.

Cronyn also has two Picasso tattoos, one on each of her forearms.

She said her father was an art major in college so she grew up around all different types of art, and these tattoos are a tribute to her dad and the beautiful relationship they have.

“It’s rad to know I’m walking around with literal art on my body,” said Cronyn.