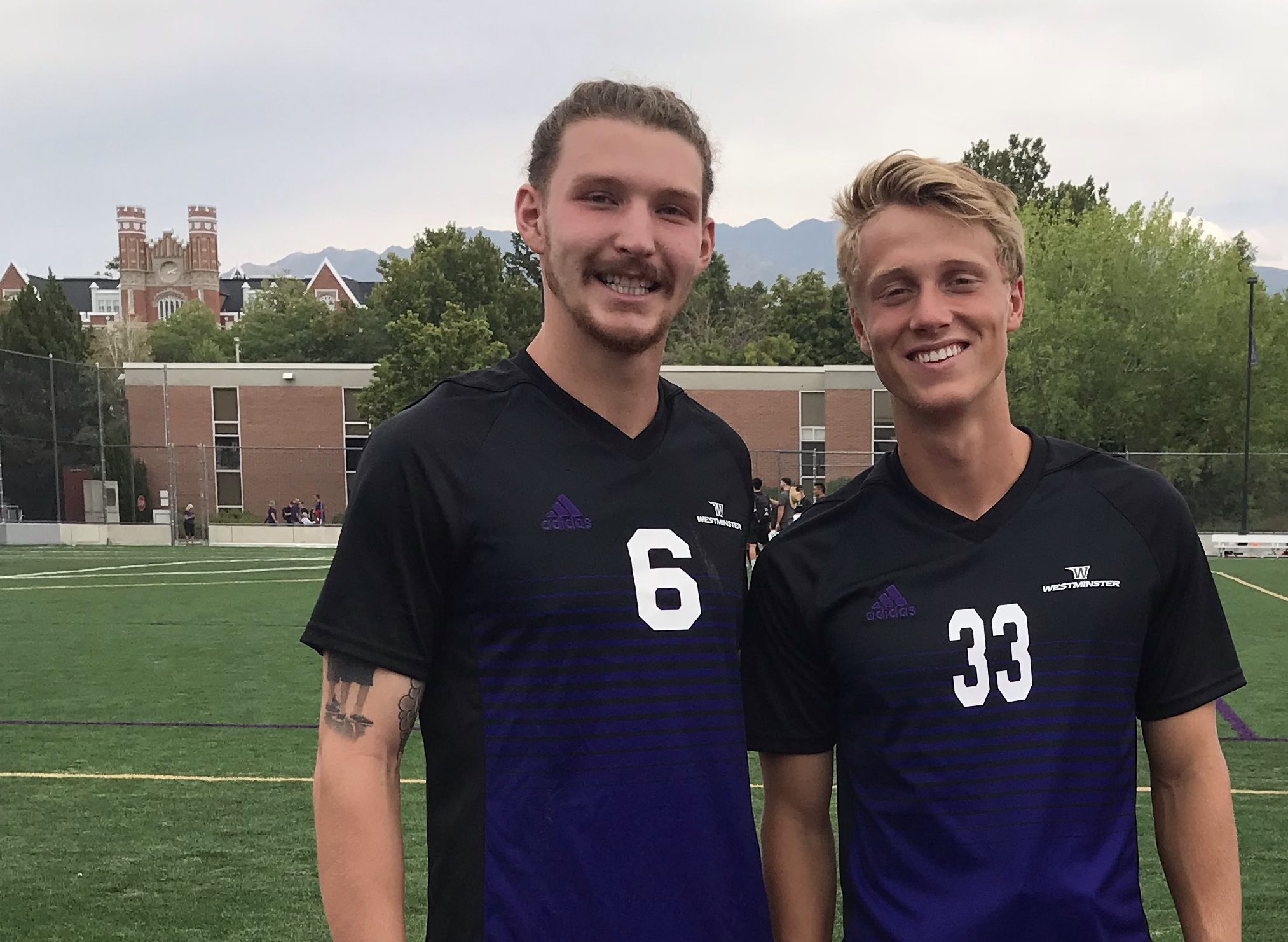 Alec Marshall, a senior sociology major who transferred from Cal State Fullerton, with his teammate Gavin Flitton after a home game in fall 2018. Transfer student athletes like Marshall said they often have troubles with all of their credits transferring when they come to Westminster College. (Photo by Sicilee Williams)

She said she planned to play in the 2017- 2018 season starting in October. Westminster, however, did not accept all of her credits, forcing her to become a redshirt, a college athlete who is withdrawn from college sporting events during one year in order to extend the period of playing eligibility.

In other words, since some of her credits did not transfer, it made Ellis ineligible to play basketball because of National Collegiate Athletic Association (NCAA) rules.

Ellis isn’t the only student to have this experience. Many transfer student athletes said they struggle receiving credit for classes taken at other schools, despite efforts from Westminster to accept transfer credits.

From 2016-2018 — including fall, spring and summer for a total of nine semesters — Westminster had 682 transfer students enroll in classes, although the exact number of transfer student athletes is unknown, according to the admissions office.

Whether transfer credit fulfills specific requirements in a major or minor is determined by an advisor in the program of study, according to Westminster’s website. The website also says that a student who receives elective transfer credit for a course may not necessarily be able to apply that course to the major or minor.

Why Athletes Transfer to Westminster

Many student athletes said they transferred to Westminster because of the academics and the ability to play their sport.

Reid Arne, a sophomore double major in finance and global politics, said he came to Westminster for two reasons: the intimate educational environment and to continue playing soccer.

Arne transferred to Westminster from Brigham Young University (BYU) with about 105 credits. He said he felt like his learning experience at BYU was more oriented towards exams and achieving high grades, and he wanted to feel that he was growing as a person instead.

Arne also received a scholarship to Westminster to play on the men’s soccer team.

Arne’s teammate, Alec Marshall, a senior sociology major who transferred from Cal State Fullerton, said he had a similar reason for attending Westminster.

He said he was drawn to Westminster because of the academics, his desire to attain a college degree and the ability play for the men’s soccer team. 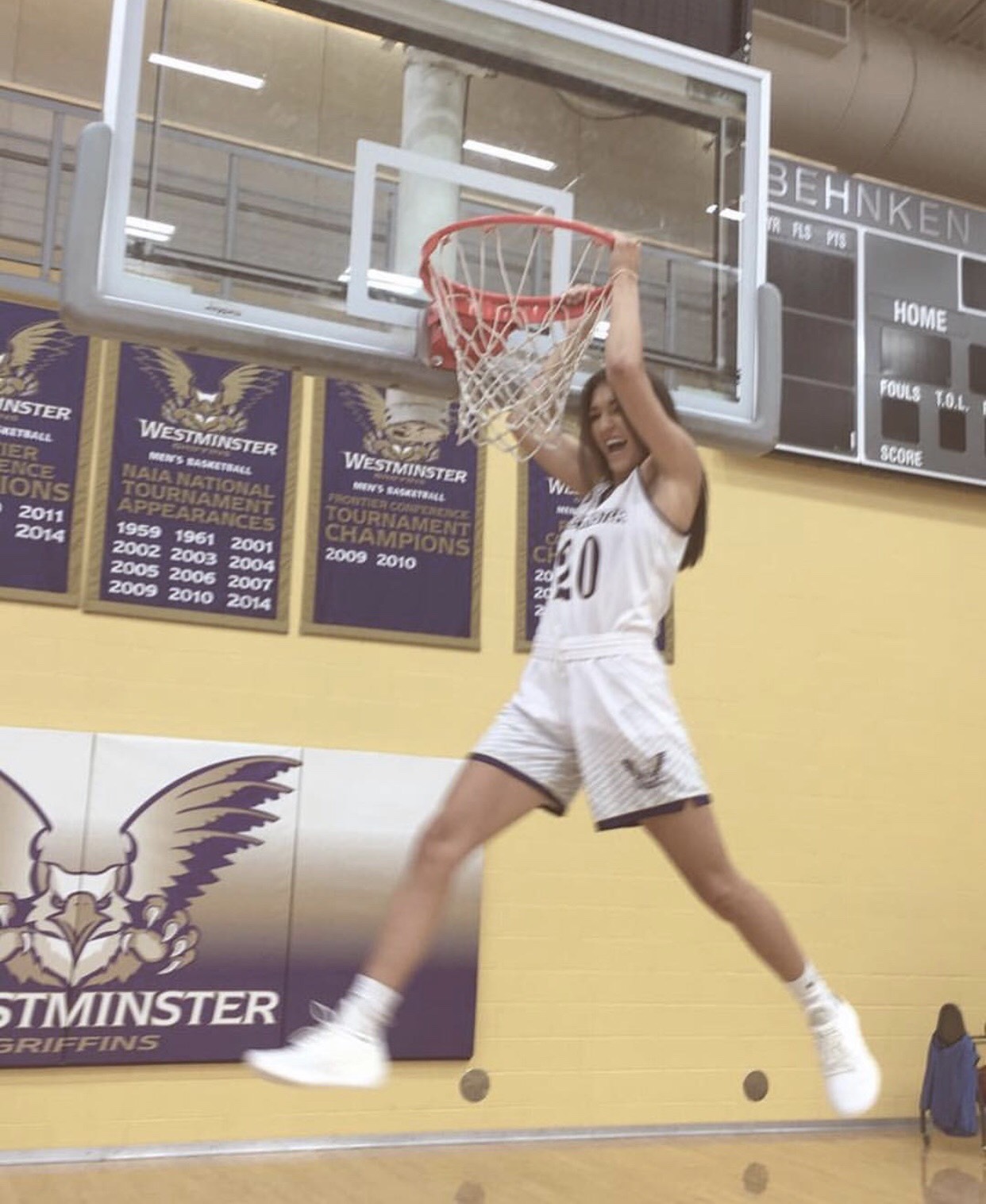 Women’s basketball player Olivia Ellis hangs from the hoop on picture day in the Benhken Field House in fall 2018. The junior public health major transferred to Westminster College in 2017 from Salt Lake Community College and said she had trouble transferring credits which affected her eligibility to play. (Photo courtesy Olivia Ellis)

Some Westminster student athletes said that credit transfer problems had a negative effect on their overall transfer.

Ellis, a junior public health major, transferred to Westminster with 45 credits and received credit for all but one course.

“The school told me that they would not accept the class, Medical Terminology, because they did not offer it as a course,” Ellis said.

Sarah Reiber, a junior business management major, said she had a similar problem with her transfer credits.

“I do think Westminster can do a better job accepting credits especially for transfer students,” Reiber said.

Marshall, a senior sociology major, said he earned approximately 80 credits prior to Westminster.

“All of my credits transferred, but not all counted for my major,” Marshall said. “I ended up having to retake several classes similar to those I had participated in at Fullerton.” 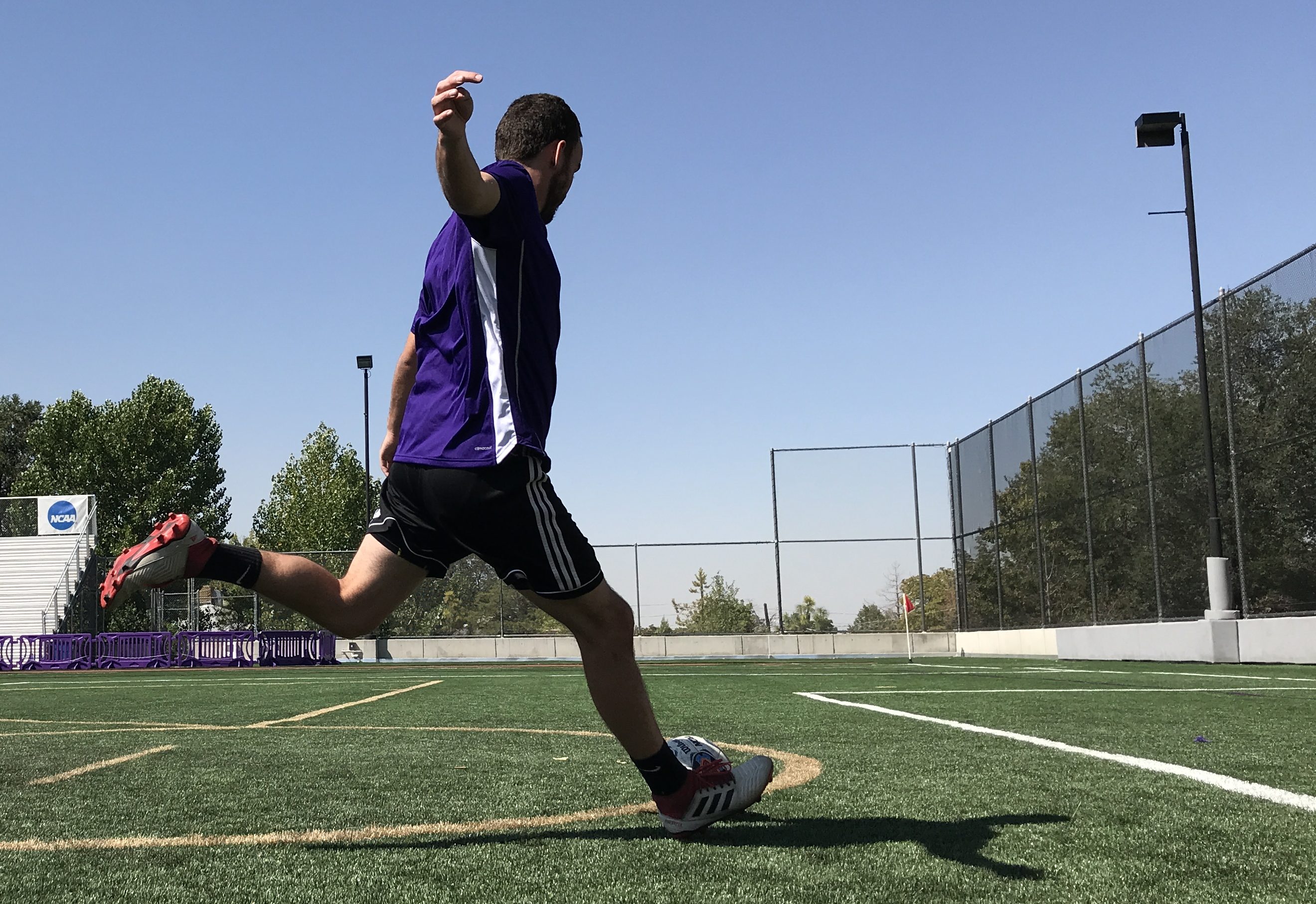 Senior goalkeeper Max Medley practices goal kicking on the new turf before practice on Sept. 7. Many transfer student athletes said they struggled receiving credit for classes taken at other schools, despite efforts from Westminster College to accept transfer credits. (Photo by Sicilee Williams)

Although Marshall said it was not ideal to retake similar classes, he said he was able to take advantage of the situation so that he could play another year of soccer.

“This actually worked out for me because I used the extra semester it took to make up those classes to utilize the last year of my eligibility,” Marshall said.

Because advisors of a major or minor can decide whether transfer credits fulfill certain requirements, Marshall said he was also able to substitute a similar class from Fullerton with the help of his advisor.

“Fortunately my head of department was flexible and allowed me to substitute one class of his for a credit earned from Fullerton,” Marshall said.

“I’ve actually been really impressed with the way in which Westminster helped me in my transferring process,” Arne said. “Faculty was very proactive in contacting me and encouraging me to come onto campus and get everything sorted before school started.”

*Sicilee William is a member of the Westminster College Women’s Basketball team.