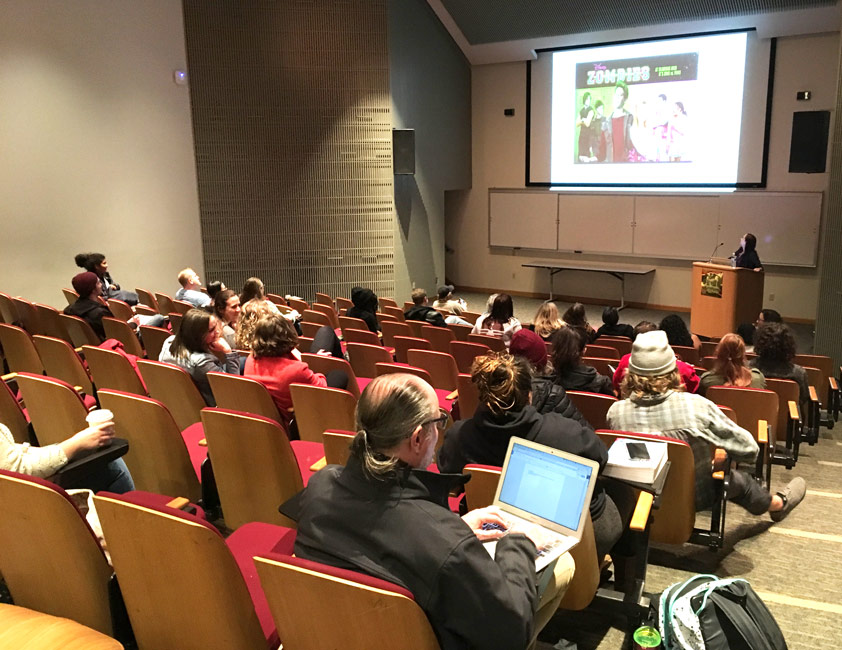 Dr. Aliza Atik, an assistant professor of English at Queensborough Community College in New York, begins her lecture, called “Vivisecting the Undead: Queer Hauntings and Zombie Desires.” During Atik’s lecture, held in Westminster College’s Gore Auditorium on Wednesday, she drew a strong connection between times of cultural unease and the popularity of zombies. (Photo by Stephanie Held)

The popularity of zombies in American culture — think TV shows like “The Walking Dead” and apps like “Plants vs. Zombies” — may allude to societal fear of changing norms, according to Dr. Aliza Atik, who spoke at Westminster College on Wednesday in the Gore Auditorium.

In her lecture, Atik drew a strong connection between periods of cultural unease and zombie popularity.

“Right now, one of the most common trends in our media artifacts are zombies,” Atik said. “What is it about this moment, right now, that makes us turn to the image of the zombie?” 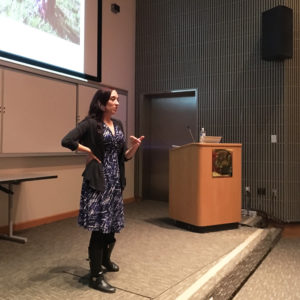 Dr. Aliza Atik, an assistant professor of English at Queensborough Community College in New York, answers audience questions after her lecture, “Vivisecting the Undead: Queer Hauntings and Zombie Desires,” in the Gore Auditorium at Westminster College on Feb. 7. Atik said the presentation was a product of her research on Victorian images of monstrosity. (Photo by Stephanie Held)

In her presentation, called “Vivisecting the Undead: Queer Hauntings and Zombie Desires,” Atik drew parallels between representations of zombies and the cultural revolutions shaking the late Victorian era — namely anxiety around Charles Darwin’s theories of evolution and sexual selection.

“It might seem silly that we’re talking about zombies and TV shows, but these works of art are actually a reflection of ourselves,” Chanza Torres said. “I think that’s what the gist of [Dr. Atik’s] talk was.”

The lecture was a product of Atik’s research on images of monstrosity, after her exploration of Victorian literature eventually led her to analyze contemporary representations of zombies, she said.

Anne Canavan, who teaches English at Salt Lake Community College, attended the lecture and said she agrees zombies are often most popular when social boundaries are in flux. She also said she thinks it’s important for colleges to host lectures like this for the surrounding community.

“Colleges have resources to bring people who otherwise […] you might not have access to,” Canavan said. “If it weren’t for Westminster and CUNY (The City University of New York) bringing Dr. Atik here, I would never have gotten to read her [work].”