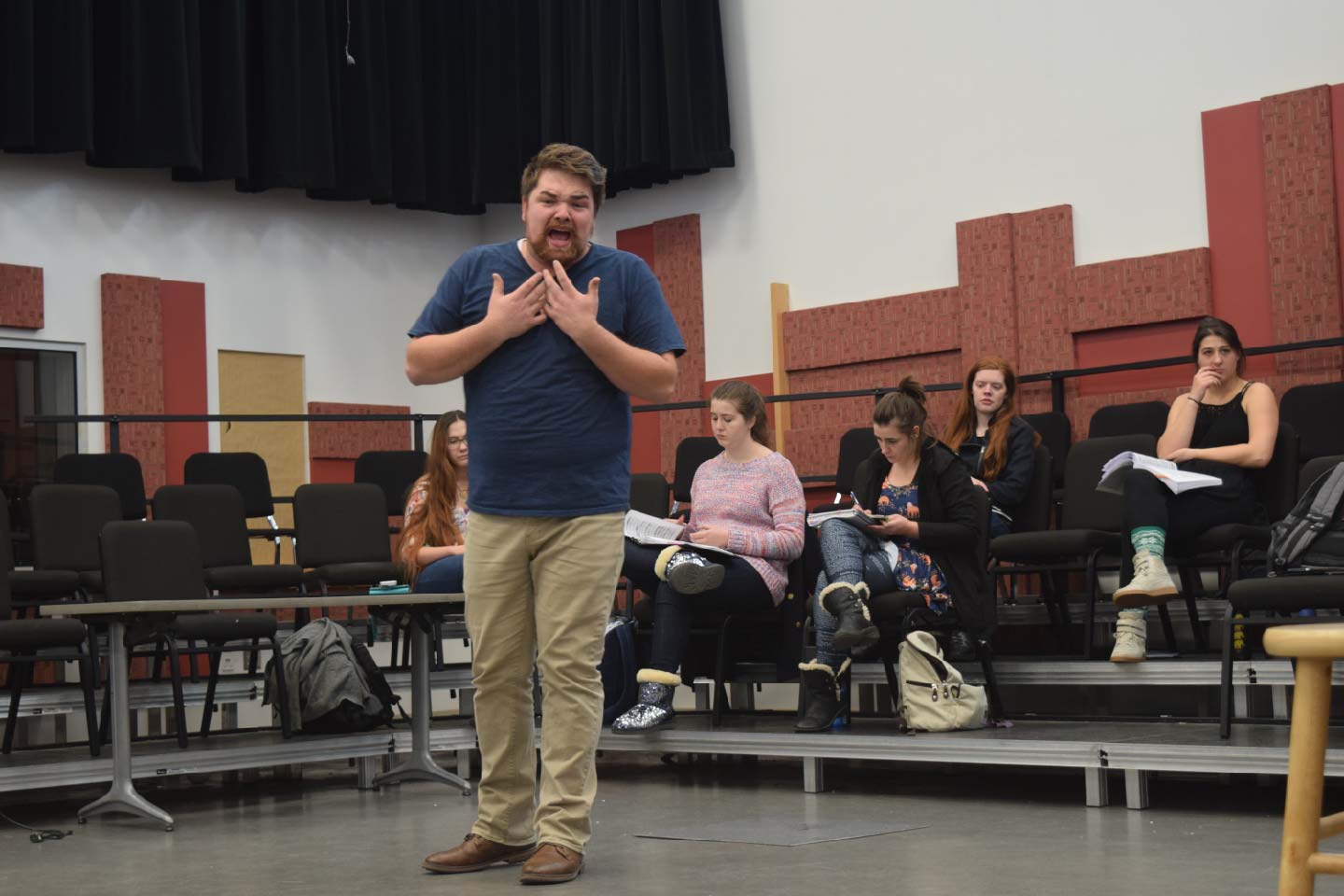 Eric Taylor, a student at Westminster College, practices on Dec. 6 in the Jewett Center for the Performing Arts for his upcoming opera role in the school’s production of “Elixir of Love.” Taylor said his ability to sing very high notes has brought him opportunities to perform his dream roles in college and beyond. (Photo by Nicole Balmforth)

Though Eric Taylor only began singing three and a half years ago, last year he managed to land the tenor soloist role in Ballet West’s production of “Carmina Burana” — partially due to his ability to sing unusually high notes.

Taylor found out he could sing when he participated in his first opera performance in 2014, he said. Soon after, he chose to pursue opera and singing full-time as a vocal performance major at Westminster College.

He’s one of only a few tenor singers who can sustain high notes in full voice for an entire opera.

Marc Reynolds, an adjunct instructor at Westminster responsible for opera studio and voice teaching, is working with Taylor this semester for the college’s upcoming production of “The Elixir of Love.”

“Obviously, [Taylor has] seen a lot of success — especially as an undergraduate student and in other areas than just here at school — but there is a reason for that,” Reynolds said, noting Taylor has “a rare voice. Not very often [have I worked with a student with his singing capabilities], especially in collegiate levels.”

The Forum sat down with Taylor to discuss his ability to sing high tenor notes and find out how that’s helped him secure difficult roles.

Q: Are you able to sing high tenor notes? Which ones?

A: Yeah, that’s mainly why I got hired and why I got so far in [competitions]. Both of the roles — [“Carmina Burana” and “La Bohème”] — they have the famous tenor high C. “Carmina Burana” actually goes a whole step above that and there is a high D in that score. It’s very high. Most tenors sing it in, like, a falsetto, but they hired me because I could sing it easily in full voice.

Q: How often would you meet a person that can sing high tenor notes like you can?

A: For me, I am more engaged with those kinds of people. A normal person probably won’t meet somebody that can sing the notes very often. It honestly is just a handful in the world, and when I say handful I mean there’s a few in each state. It’s hard to find, definitely, in the business. I wouldn’t say it’s very often that you will find somebody that can sing the notes.

Q: What opportunities has singing high notes provided you here at Westminster?

A: Here at Westminster, it’s actually a growing program for the vocalists. Already, I’ve been afforded to perform these dream roles. To sing Rodolfo in “La Bohème” like we did last year is a dream role and it’s a role that I’m going to be singing for hopefully the next 30 to 40 years as I go out into the professional world. Being able to sing these notes and sing like I do has [afforded] me to be able to be the lead in all the operas since I’ve been here at Westminster.

Q: What opportunities does it provide beyond college?

A: It affords lots of opportunities just because it’s a unique voice. To be able to sing that high, not many people can or if they can they will sing it in a very different way. It’s not as much as being able to hit the notes as to be able to sustain them over a full opera. A lot of times, you will be singing up all high like that for two to three hours. There’s only a handful of people in the world that can do it. That affords me the opportunities to get contracts and get work through different companies because there are a lot of roles they need filled but not many people to be able to do them.

Q: What’s next for your singing career?

A: Next, like I said, we are performing the “Elixir Of Love” here at Westminster College the last weekend in January and the first week in February. It is an amazing show. There’s great music. Then I graduate this May and I have just finished my applications for graduate school. I’m going to go and get a master’s degree in vocal performance as well, and then from there you start auditioning for different houses [theatres where operas are performed]. I am waiting to hear back, but hopefully to go sing with another company this summer before grad school starts. Then, [I’ll] just continuously get hired for gigs in the opera world.