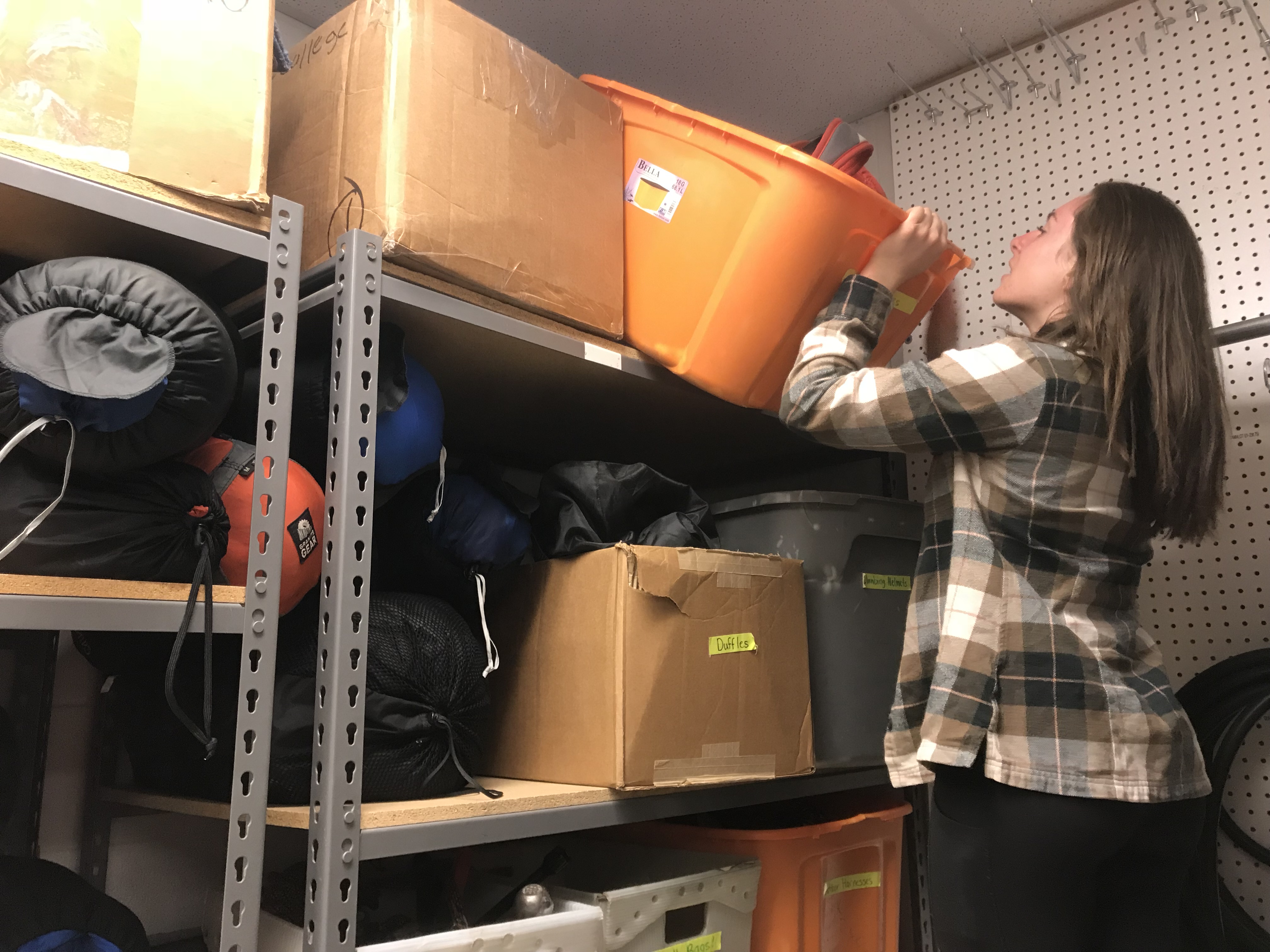 Michelle Vainwright, a junior outdoor education and leadership major, sorts through gear in the Outdoor Leadership office in the Dolores Dore Eccles Health, Wellness and Athletic Center (HWAC) on Sept. 18. Vainwright works two jobs to help pay for tuition because her campus job pays the federal and college minimum wage of $7.25 an hour. (Photo by Mackenzie Quarry)

Westminster College’s minimum wage and work hour limits push some students with on-campus jobs to look for additional sources of income, according to students. Which leaves them with little time for schoolwork or other activities.

Michelle Vainright, a junior outdoor education and leadership major, said she works hard to make ends meet while also trying to be a full-time student.

“I’ve been working on campus since May of 2017,” Vainwright said. “I started as one of three core summer staff for the outdoor program. This year, I’m working full time between my two jobs, and it feels like my school isn’t my priority at all.”

Vainwright has three positions with Westminster’s outdoor program: trip leader, outdoor program office employee and occasionally the climbing wall administrator. She said that all three positions sometimes require more than 20 hours and can take up a whole day when she takes groups out for recreational activities.

“I try to go to the events that are held on campus during the day between classes and such,” Vainwright said in an email. “I would love to go to more, but since I’m so busy trying to balance 45-hour-work weeks plus full-time school, it’s just not realistic for me.”

Vainwright also works three to four times a week as a dishwasher at Log Haven, a restaurant in Millcreek Canyon.

“Log Haven is often night shifts, which gives me time to go to school and sometimes work at the Outdoor Program office before my Log Haven shift,” Vainwright said. “But I often get home around midnight or later, so school isn’t my priority when I get home. It’s sleep.”

Vainwright said that when she started at the outdoors program in the summer, the program allowed her to work 25-30 hours a week and paid $8.25/hr. Currently, she is being paid the college minimum wage of $7.25/hr.

Westminster has a wage scale—outlined in the college’s Student Employment Pay Structure—that determines a student’s pay. The scale divides students into brackets based on the number of years they’ve had a position—one to five or more—and level of position—A through C. 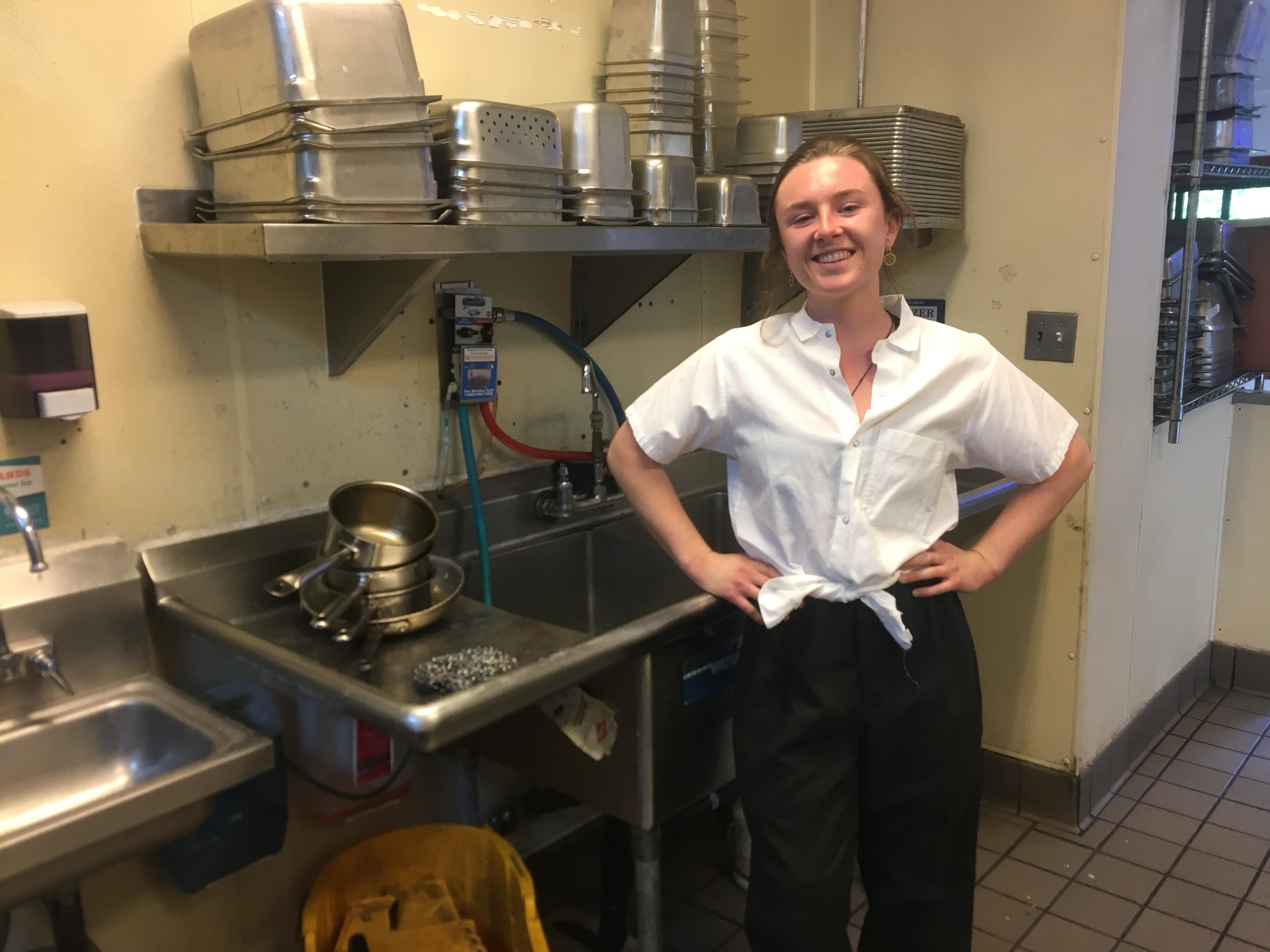 Michelle Vainwright, a junior outdoor education and leadership major, washes dishes at the restaurant Log Haven, in Millcreek Canyon, on Sept. 19. In addition to her job as a dishwasher, Vainwright works on campus to help pay for tuition, and working both jobs leaves her with little free time she said. (Photo by Mackenzie Quarry)

The college also prohibits student works from working more than 20 hours per week during the academic year. According to Curtis Ryan, vice president of finance and administration at Westminster, when students work more than 20 hours in a single working week, their paychecks can be taxed under the Federal Insurance Contributions Act (FICA)—the tax that funds Social Security and Medicare.

“As a student worker, working under 20 hours a week, the federal government allows us not to withhold any FICA tax,” Ryan said.

Ryan also said the college’s limited budget is one reason why the minimum wage for students has stayed $7.25/hr.

“In [the] budget is every departmental budget on campus, one of those line items includes student labor and college work study,” Ryan said.

A lot of factors go into budgeting for the current or upcoming school semester, Ryan said. He said because the college has fixed expenditures, everything falls on how much the college receives in tuition, scholarships and other outside donations.

“If our enrollment [is] down, we still have a lot of the same fixed costs related to the facilities, ground and maintenance,” Ryan said. “Would the college love to pay more as a base rate? Absolutely.”

Each year the budget is adjusted depending on money coming in, as well as how much the college spent on a particular line item the year prior. Last year, the college work study and student labor budget did not spend as much as the Finance and Administration Department had predicted, which resulted in a decreased budget for the 2018-2019 school year.

There is a way to combat the minimum wage on campus by jumping from position to position, Ryan said.

“If you’re going to stay in the same position, maybe you need to be like ‘Okay, I’m going to work here for a year and then I’m going to look for another position that might pay me a little bit more,’” Ryan said. “There’s other jobs that pay more based on skill level.”