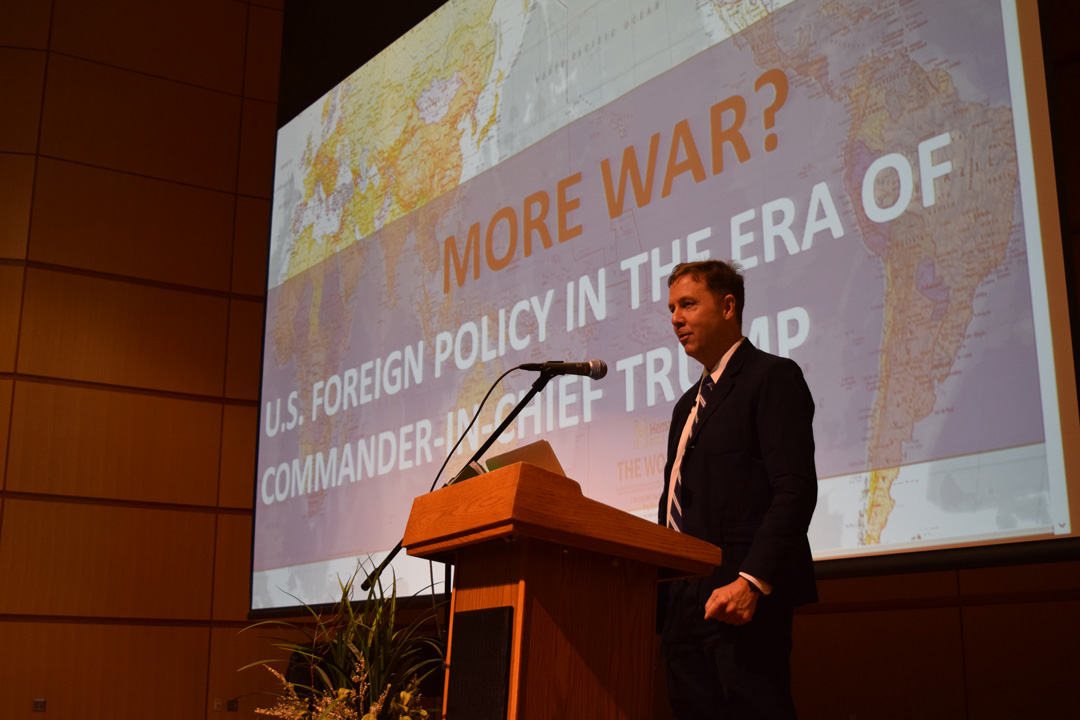 J. Kael Weston, a professor in the Honors College at Westminster College, lectures in Vieve Gore Concert Hall on Tuesday. Weston’s presentation “More War? U.S. Foreign Policy in the Era of Commander-in-Chief Trump” discussed changes to U.S. foreign policy under the current administration and challenged its audience to see themselves in those from war-torn countries. (Photo by Olivia Causse)

Westminster College professor J. Kael Weston challenged an audience in the Jewett Center for the Performing Arts on Tuesday to remember that those in war-torn countries aren’t too different from themselves.

Weston, a professor in the Honors College and the 2017-18 Kim T. Adamson Lecturer, covered how war has changed in the Trump administration and the influence that comes from conflict in a talk called “More War? U.S. Foreign Policy in the Era of Commander-in-Chief Trump.”

One of the influences of war is that it turns people against each other, Weston said. But after teaching in Afghanistan, he said he realized his students here are quite similar to the ones he had there.

“What I learned from them is what I’m learning from you, and I’m also realizing you’re not that different,” he said.

Realizing this common humanity can be the first step to closing gaps and creating understanding between people, Weston said.

“I think it’s really important that we, as Americans, being a global leader are more conscientious of who we choose as our leaders and the policies we support and [of] educating ourselves to know more about these issues.”

But first, Weston said people need to get outside of their comfort zones.

Elizabeth Johnson, a junior marketing major and one of Weston’s students, said students at Westminster have plenty of opportunities to do that.

“I think getting outside of your comfort zone can be done right here on campus and can be done through a simple conversation,” she said.

One way Johnson said she’s gotten outside her own comfort zone is through taking Weston’s class, Going to War: Costs and Consequences — a space she said has helped her break down barriers of difference between herself and others.