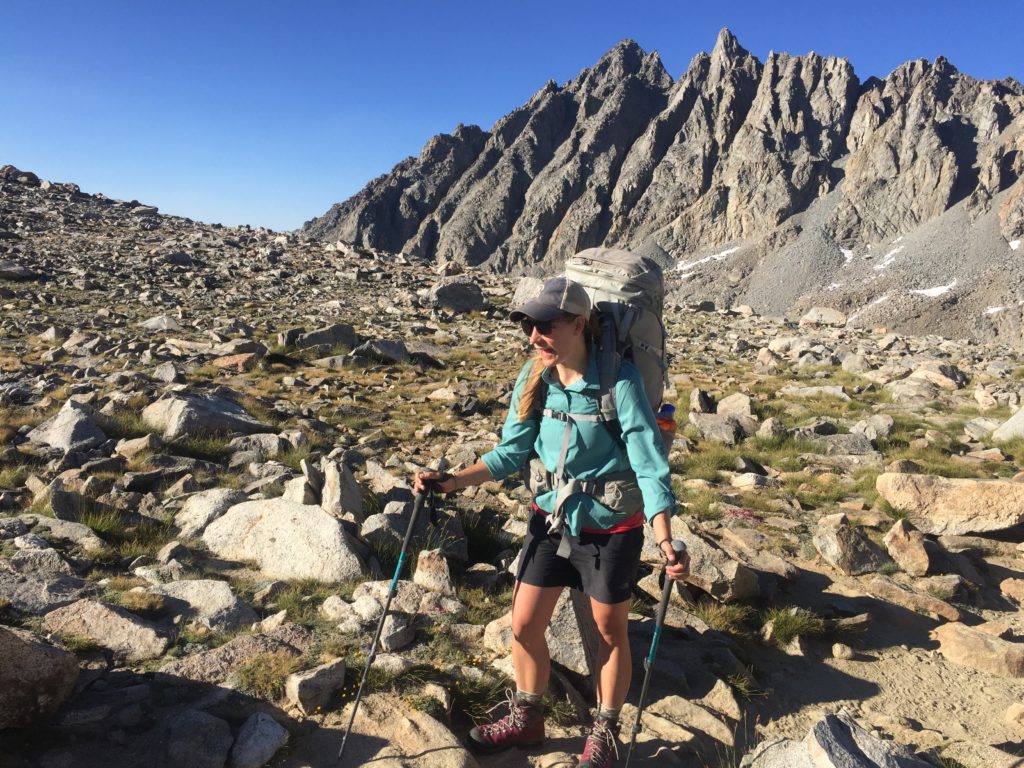 Cassidy Jones, a Utah native and Westminster College alumna, hikes in Sequoia Kings Canyon in California, which she said is one of her favorite national parks. Jones is the newly-appointed administrative, outreach and engagement coordinator at the National Parks Conservation Association and said she remembers exploring the canyon’s remote and rugged terrain in August 2017. (Photo courtesy Cassidy Jones)

A Utah native who grew up with a deep connection to Grand Staircase Escalante National Monument, Cassidy Jones developed an innate interest in public lands, national parks and political-cultural conflict from a young age.

When Jones was a student at Westminster College, the environmental studies program was only in its infancy. Instead, her English coursework led her to discover a passion for the intersection between people and environment.

Several years into her undergraduate work and experience as a park ranger at Timpanogos Cave National Monument, Jones began to realize her desire to build a career related to parks and public lands.

Cassidy Jones, a Utah native and Westminster College alumna, captures the beauty of the natural landscape at Sequoia Kings Canyon National Park in California last August. Jones is the newly-appointed administrative, outreach and engagement coordinator at the National Parks Conservation Association and said these natural vistas are one of the many things at stake when it comes to shrinking or resizing public lands, parks and monuments. (Photo courtesy Cassidy Jones)

“The first time I saw her in her ranger outfit with the hat on leading a tour was the craziest thing you can imagine,” said Kylie Kingsbury, a close friend of Jones’ who also attended Westminster. “You have this idea of your friendship and the day to day things that you do together— you go out to dinner, you do homework— then all of a sudden she’s in this uniform that’s very prestigious and authoritative.”

After receiving a bachelor’s in English from Westminster, Jones went on to earn a master’s in parks, recreation and tourism from the University of Utah, where she studied National Park Service urban engagement in urban-proximate parks.

“It’s funny because her whole personality just tilted a little bit and she very clearly owned the situation and was super confident in her abilities to share her passion about Utah wonders,” Kingsbury said of Jones’ career.

The Forum sat down with Jones to discuss her occupation and how it led her to become the newly-appointed administrative, outreach and engagement coordinator at the National Parks Conservation Association (NPCA). This interview has been lightly edited for clarity and conciseness.

Q: When did you realize you wanted to have a career related to national parks and public lands?

A: I point to two key moments. When I was probably a sophomore in college, I was studying English. But I was kind of trying to think of what my “thing” would be and what I was interested in within English and literature and with doing a little bit of research on places to study abroad, I was thinking about these things. What I realized was that it was intersections between places and people and literature that was most interesting to me and that was really solidified by taking an environmental literature course at Westminster my junior year. But [I probably didn’t realize] until about 2012, when I visited Mesa Verde National Park and realized that a large part of park rangers’ jobs is to communicate with people about these beautiful places and stories. I saw these things that I was interested in and that [I] was intellectually stimulated by that sort of all come together in one occupation. That’s really what headed me down the road to pursuing employment opportunities with the National Park Service.

Q: What is your favorite national parks? Why?

A: A trip to [Sequoia &] Kings Canyon National Park is something that I’ve done most recently and is just an extraordinary example of what a place can be like in one of the most populated states in the entire country but that has been set aside as designated land and wilderness for a long time. What’s preserved there — the ruggedness, in a state like California where you might not expect to find that — is extraordinary. It has some of the most interesting, remote and rugged terrain that I have ever been in.

Q: Why do you think it’s important for society to preserve national parks and public lands?

A: For me, the national parks and the National Park Service really tells the stories of the United States and the American experience. It is one of the few agencies that really takes seriously its ability to shape the narrative that we tell ourselves, the nation and the world and that’s just an extraordinary institution to have access to. It tells a lot of the untold stories that aren’t represented a lot in textbooks but that are represented in the places that they are preserved. I think there’s a lot of power in that and it’s important. Of course, protecting public lands is just, in my mind, one of the most democratic things we can do. The United States has a system of public lands and national parks that ensures that all people — no matter your income level or where you come from — have access to these beautiful places.

Q: What are some of your favorite memories at national parks or in public lands?

A: I’ve been on countless wonderful trips [to Grand Staircase Escalante National Monument] and really appreciate an opportunity to live there for about two months one summer in college. I was working on collecting literature that had been written about the monument by all kinds of different people and all kinds of different perspectives and persuasions about public lands and parks. I remember taking a lot of friends from Westminster to experience Grand Staircase Escalante for the first time. That was only 10 or so years ago, and seeing how different that monument has become in that amount of time, seeing more people visit it — I’m just really pleased that I could share it with some people when it was still relatively new on a lot of people’s radars and get them to build an interesting connection to the place, as well, so that they’re aware of what’s going on in those spaces and what’s at stake.

Q: What is at stake at Grand Staircase Escalante?

A: Grand Staircase Escalante has extraordinary paleontological resources — a lot of different kinds of fossils. Species of dinosaurs have been discovered within Grand Staircase Escalante’s national boundaries — things that have just not been discovered anywhere else in the world — and [the fossils] are now basically at risk of [not] having any more of those discoveries and just kind of really impacted by other activities going on in the monument. For instance, oil and gas development or potential mining development in the area and irresponsible use of off-road vehicles in sensitive places could really disrupt any ongoing archaeological or paleontological work there but also really disturbs sites to the extent that archaeologists and paleontologists wouldn’t be able to ever really work there and get a clear story of the past.

Grand Staircase Escalante is one of the darkest places at night in the entire lower 48 [states] and lots of infrastructure from things like extractive uses could put up bright lights and really disrupting view shed and adding a lot of light pollution in the area… These are just a few things that make me pretty concerned and make NPCA concerned about how we’re rating Grand Staircase Escalante in these modern times, where the Antiquities Act and the president’s right to create national monuments is really being challenged and manipulated in ways that it’s never been before.

Q: What do you hope to accomplish in your field within the next five years?

A: Our vision is really grow the next generation of advocates, get younger and different kinds of people advocating on speaking up on behalf of the national parks and public lands.  I also do outreach and engagement work and I’m really going to work in the next several years on how we can do that — how we can connect with younger generations. I think being a millennial myself makes me well suited to do this job, but it’s something that I think is important in sort of how we make parks and public lands relevant for young people across the country. Not everyone lives in the American West, where parks and public lands are in their faces every day. So how can we make these places important among all the other really important issues in the United States and abroad, and how do we make it matter to a lot of people so that they will band together and use the voices that they have?