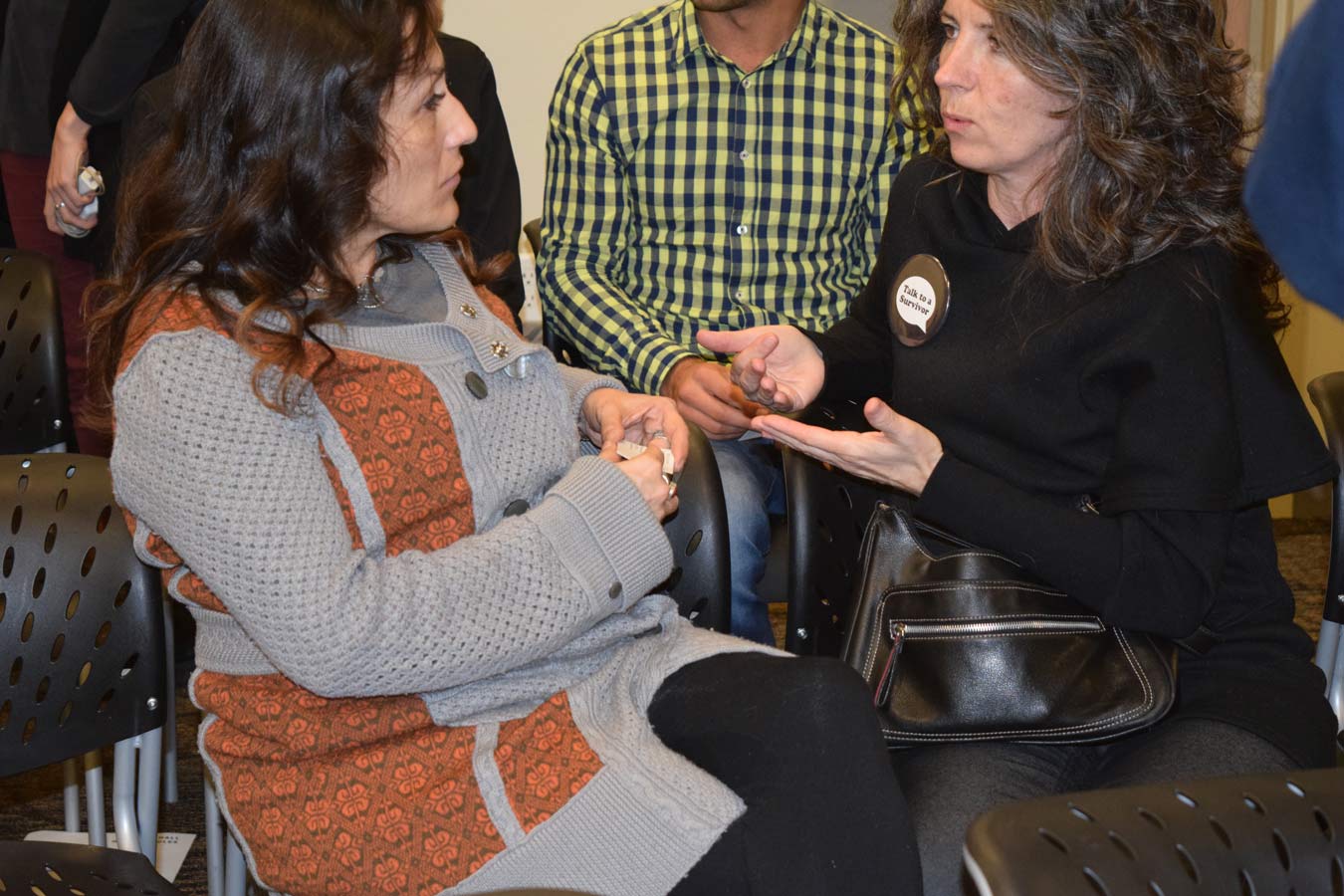 Two survivors share stories with each other at a local #MeToo town hall meeting at the Salt Lake City Library’s Glendale Branch on Tuesday evening. The conversation came together in part thanks to Laurie Hofmann, the board chair for the Utah Coalition Against Sexual Assault (UCASA) and a Westminster College graduate. (Photo by Hope Bloom)

Hollywood isn’t the only community shaken into action by the #MeToo movement — a hashtag that went viral last October and has remained in the spotlight through national media coverage.

The conversation also came to Salt Lake City Tuesday night in a formal way with with #MeToo: A Townhall Conversation, thanks in part to Laurie Hofmann, the board chair for the Utah Coalition Against Sexual Assault (UCASA) and a Westminster College graduate.

“I was horrified by the thought of Roy Moore being elected to office,” said Hoffman, referring to a Republican Senate candidate in Alabama who was accused of unwanted sexual contact with underage girls. “I could not imagine that we would put a pedophile in the United States Senate. And I went to UCASA and I said, ‘We have to have a #MeToo event. We have to let people talk about this.’”

The #MeToo hashtag serves to demonstrate the magnitude and prevalence of sexual harassment and sexual assault in the workplace and in society, while also showing survivors they aren’t alone. It gained significant traction after news organizations surfaced several sexual misconduct allegations against producer Harvey Weinstein and eventually against nearly 51 other men in positions of power.

Within that climate, Hofmann said it’s important to give Utahns a safe space to discuss these issues, share their experiences and gain access to recovery and advocacy resources like UCASA and the Rape Recovery Center.

Hoffman has also been a proponent of establishing resources at her alma mater. In 2016, she and UCASA partnered with current Westminster junior and ASW President Sabi Lowder to address the college’s absence of a victim advocate.

“At the time, Westminster College did not have a victim advocate on campus and Sabi thought it was incredibly important that that service was available for victims of sexual assault, sexual violence and sexual harassment,” Hofmann said. 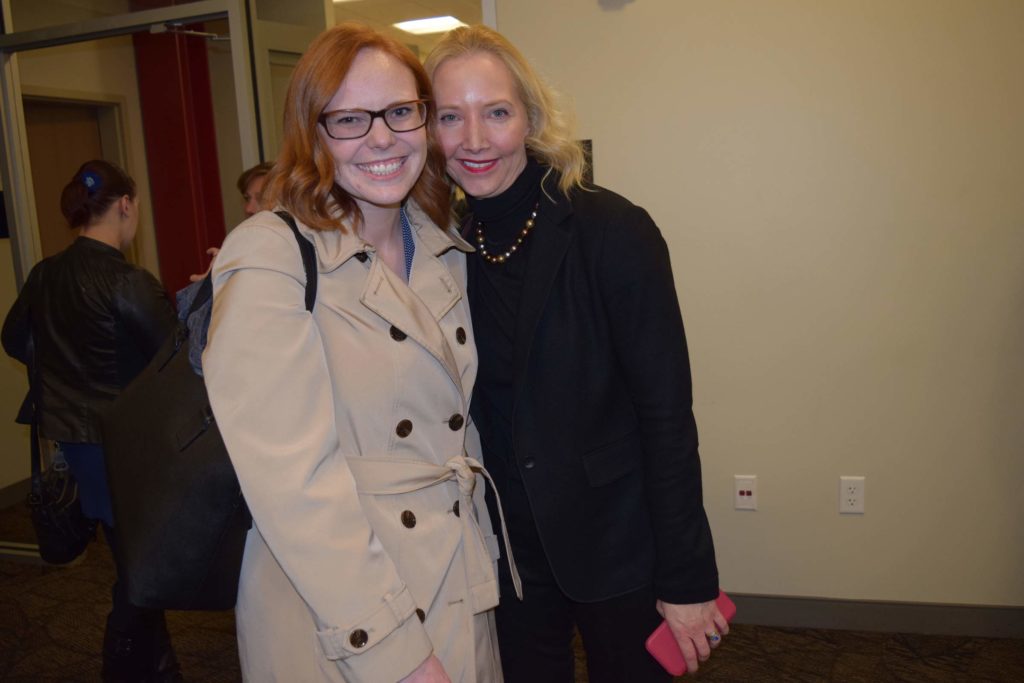 Laurie Hofmann discusses how they can make a difference in the community with a local attendee at a #MeToo town hall meeting at the Salt Lake City Library’s Glendale Branch on Tuesday evening. The conversation came together in part thanks to Hofmann, the board chair for the Utah Coalition Against Sexual Assault (UCASA) and a Westminster College graduate. (Photo by Hope Bloom)

Before the college hired a victim advocate in February 2017, Hoffman and Lowder decided to train students to create peer victim advocates on campus. In 2016, Hofmann, UCASA and Lowder hosted a 40-hour training to enable students to become support for survivors. They will offer the collaborative training sessions again this year.

Utahns are in even more need of sexual violence resources than people in other states, according to Kristen Floyd, executive director of Safe Harbor, a non-profit that provides services to domestic violence and sexual assault survivors.

“Considering that Utah has the highest rate of sexual assault and domestic violence in the nation and has for the past 25 years, the #MeToo movement is important because it’s finally forcing Utah to have a voice where — in the past, culturally — we’ve kept it far more quiet than any other state” Floyd said.

Nationally, one in five women will experience some form of sexual violence in her lifetime. For Utah women, that rate is one in three, according to the Utah Department of Health.

“I think there’s many factors to that,” Hoffman said. “I think we live in somewhat of a regressive society. We do not allow any kind of comprehensive sex education to be taught in schools here. I think there’s a whole host of things that are contributing to the rate that we are currently seeing.”

But Jessica Eichbauer, a Cottonwood Heights resident who attended the town hall, said teaching her child comprehensive sex education ultimately acted as a hindrance rather than a help.

“The first time my daughter was assaulted, she was three years old and no one believed her because she knew the correct terminology for her body parts,” Eichbauer said.

Ultimately, Eichbauer said she thinks it’s important for people to start by believing survivors when they tell their stories.