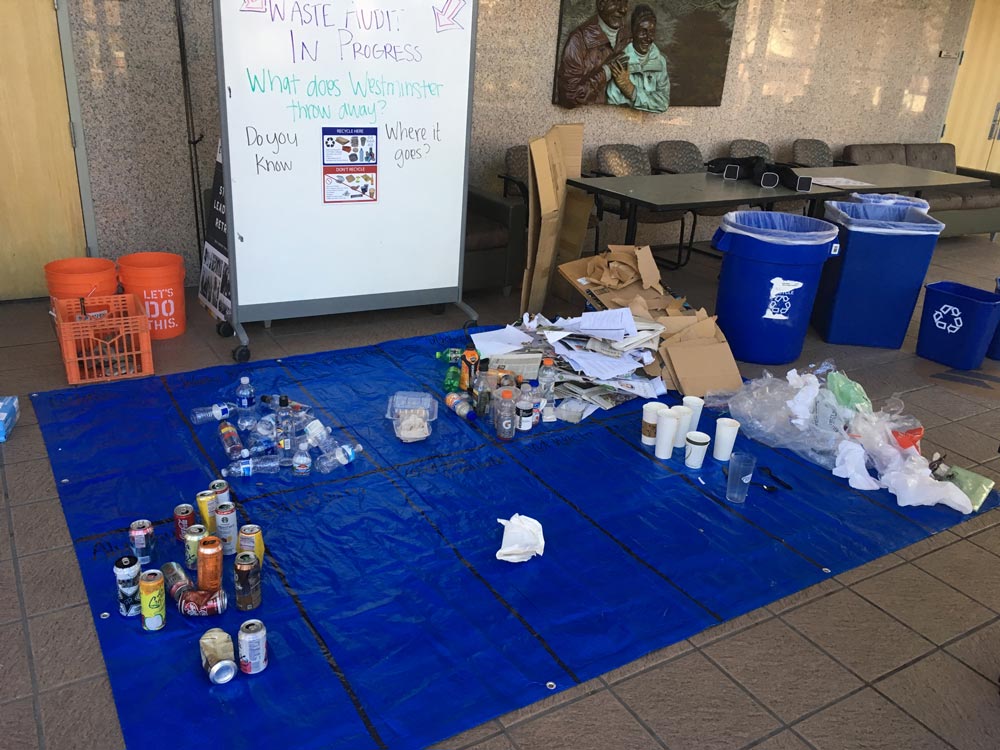 Westminster College students sort through recycling bins on campus and sort waste into different sections during one of the Environmental Center and Sustainability Council’s waste audits. The audits are a way for Westminster to gather data to see whether the campus community is recycling correctly, according to Kerry Case, director of the Environmental Center. (Photo courtesy Rosanise Odell)

Within 20 years, Salt Lake City envisions all waste within the city will be “recycled, reused or composted instead of being sent to a landfill.” In partnership with SLC Green, the public face of Salt Lake City’s Sustainability Department, the city has also released a series of ordinances to help homes and businesses move toward that goal — one of which directly affects Westminster College.

That ordinance states that businesses and family homes must “subscribe to recycling service or green waste service with an authorized hauler capable of diverting 50 percent of the solid waste and recyclable items generated,” according to SLC Green’s website.

In essence, 50 percent of the waste Westminster produces has to be recycled.

“Westminster campus is in city boundaries; we are required to conform to the ordinance that they are putting out,” said Rosanise Odell, a senior environmental science major and waste minimization coordinator at Westminster.

The city announced the amendment in January 2016, and it went into effect earlier this year.

“Technically, we aren’t complying to the ordinance at this instant, but we are working towards that,” Odell said. 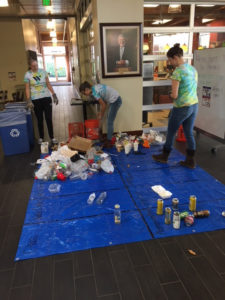 Westminster College students sort through recycling bins on campus during one of the Environmental Center and Sustainability Council’s waste audits. The audits are a way for Westminster to gather data to see whether the campus community is recycling correctly, according to Kerry Case, director of the Environmental Center. (Photo courtesy Rosanise Odell)

But Kerry Case, director of the Environmental Center, said the college, which produced 310.48 tons of waste from January to August 2017, may have some trouble complying with the ordinance at this time.

“Waste is an area where we haven’t spent a lot of time, energy, and effort in the past,” Case said. “We have focused more on energy and water, but we haven’t had a real comprehensive effort on waste management.”

Students at Westminster College have noticed the problem on campus, too.

“A lot of people I see do not practice what they preach, including myself at times,” said Brendan McKelvy, a junior marketing major. “I see people throwing things into recycling that aren’t recyclable, such as plastic bags.”

Odell also noted that the majority of the problem is due to students not disposing of trash responsibly on campus, especially in the residence halls.

“There are plenty of places on campus to properly dispose of waste,” said Mickey Browne, a junior business major. “It is just about if students are willing to use them or not.”

In response to the ordinance, Westminster’s Environmental Center and Sustainability Council decided to gather some data to see where the college could make improvements, Case said.

“As with anything, we start with getting the data,” she said. “We did waste audits, analyzed our waste bills, went to the recycling plant to see first-hand and answer some of our questions.”

The waste audits involved students sorting through trash and recycling bins on campus to see whether the Westminster community is recycling correctly. The data for these audits is still being calculated, but Case stated the percentage was less than what was required, which means the college is out of ordinance rules.

After the data is calculated, Odell said she will present her plan of action to the Sustainability Council of the Environmental Center for consideration.

“It is a really good opportunity to let her take all that work she has done and put it together and really create a plan for the next few years,” Case said.

Odell said she hopes the school will take action. And because the ordinance is now an immediate issue, she thinks the time crunch will speed up the process of improvement.

“This ordinance is a really good leverage tool to make change because it is something we are required to do,” she said. “It is an actual legal issue now.”