Westminster College’s recently-announced addition to the Jewett Center for the Performing Arts could seriously increase overall energy use and costs on campus.

Educational institutions in the United States spend almost $14 billion annually in energy costs, according to a 2012 report from the Department of Energy. As enrollment declines and tuition raises, many colleges and universities across the nation hope improving energy efficiency on their campuses will both reduce operating costs and demonstrate environmental stewardship.

“Most colleges and universities are struggling with even keeping their emissions flat on growing campuses,” said Kerry Case, director of Westminster’s Environmental Center. “Every time you add a new building, residence hall, more students, anything like that, there’s a climate impact.”

Floor plans detail the expansion of the Jewett Center for the Performing Arts at Westminster College. Construction on the 25,000-square-foot expansion is expected to start sometime this year, and it will include a 100-seat music hall for performances, as well as an art gallery and reception spaces for art exhibits. (Photo courtesy Institutional Advancement Office)

The planned Jewett expansion will be three stories and include a 100-seat music hall for performances, as well as an art gallery and reception spaces for art exhibits. The $13 million building will also include a practice hall for music ensembles and student-directed plays, as well as 18 music practice rooms. Construction is expected to start sometime this year.

The Environmental Center has been collaborating with Westminster’s Quantitative Analysis Research Cooperative (QUARC) to analyze the environmental and financial impacts of the Jewett expansion.

“Originally it was like, ‘What if we can just harness the power of statistics to say something important about energy use on campus?’”

–Sean Raleigh, associate professor of mathematics and one of three co-directors for QUARC

Westminster faculty and staff formed QUARC in Fall 2013, and the group has lent its services to a variety of interdisciplinary projects since then, including work on and off with the Environmental Center for several years.

The latest collaboration between the two will map the energy intensity (a measure of a building’s combined electrical and natural gas use compared to its square footage) of the buildings on campus, starting with Jewett.

Case said the group decided to analyze energy use because the financial cost associated with energy means the group could study environmental and financial impacts in tandem. 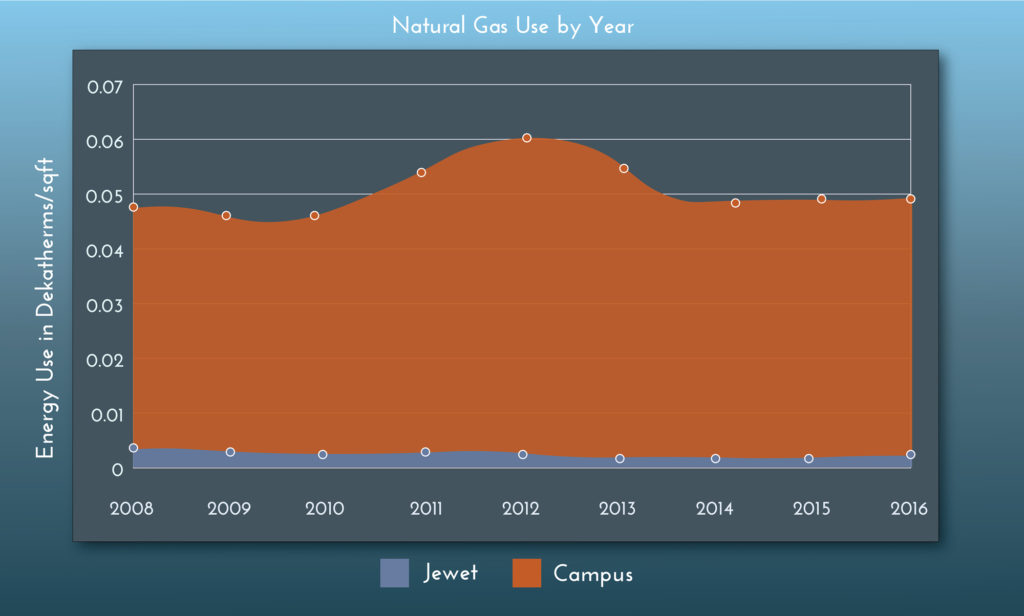 A graph tracking the use of natural gas in the Jewett Center for the Performing Arts at Westminster College over time shows the building’s use of natural gas (in Dekatherms per square foot) is lower than the campus average. The planned 25,000-square-foot expansion of the building will likely increase the total energy use and costs on campus, according to Kerry Case, director of Westminster’s Environmental Center. (Data courtesy Garret Wilcox)

Garret Wilcox, the lead consultant on the project, said another reason the group chose to study Jewett is because the building has “clean data.” In other words, Jewett has its own energy meter, so the data isn’t contaminated by other facilities on campus.

Compared to campus as a whole, Jewett’s electricity use — in kilowatt hours per square foot (kWh/sqft) — is noticeably higher. But on the flipside, its use of natural gas — in Dekatherms per square foot — is lower than the campus average.

Wilcox, a senior aviation flight operations major with geology and aviation management minors, has worked as a QUARC consultant since Fall 2015. He said he chose to work on the energy intensity project because it was a way to use his data analysis skills to benefit the Westminster community. 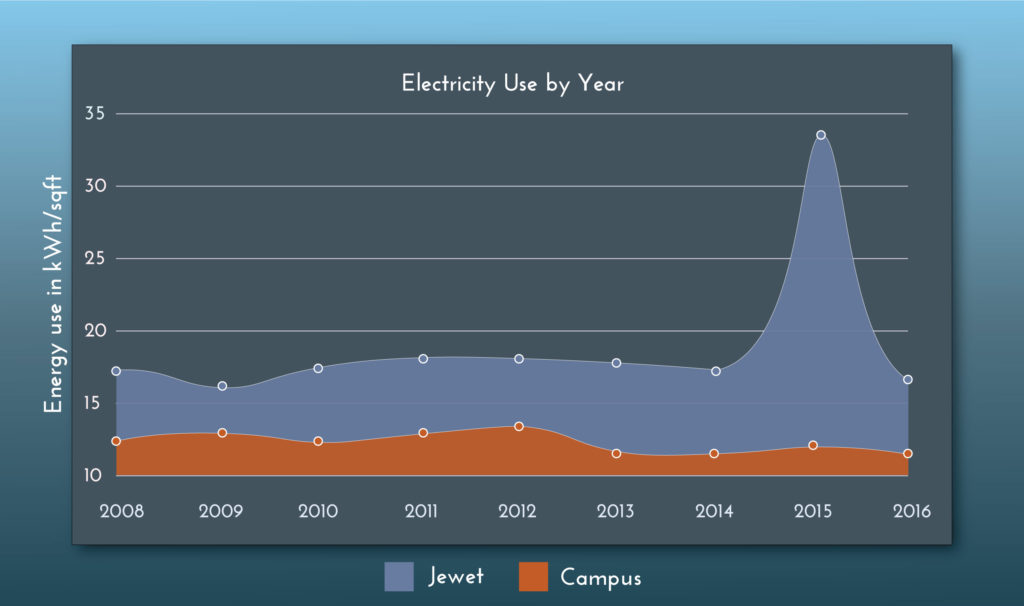 A graph tracking the use of electricity in the Jewett Center for the Performing Arts at Westminster College over time shows the building’s electricity use (is noticeably higher than the campus average). The planned 25,000-square-foot expansion of the building will likely increase the total energy use and costs on campus, according to Kerry Case, director of Westminster’s Environmental Center. (Data courtesy Garret Wilcox)

“I think [environmental stewardship] is something that’s important to image of Westminster’s campus more so than other colleges,” Wilcox said. “To see the ways that they are and are not living up to that potential is somewhat dismaying.”

The Environmental Center and QUARC plan to present their findings to Westminster’s Sustainability Council in April. But Case said she’s concerned the expansion project might be too far along for their findings to have an impact.

However, Jeff Driggs, the director of foundation relations, said the college is still in the beginning stages of the Jewett expansion project. He said no one from Westminster has met with the architects in over a year because the college is waiting on responses for several funding proposals — each worth millions of dollars — before moving forward.

Driggs also said environmental sustainability has always been part of the development conversation.

“When we got to that level of detail, we were always saying we want it to be a sustainable building and work for some level of LEED’s (Leadership in Energy and Environmental Design) certification.” –Jeff Driggs, the director of foundation relations

Richard Brockmyer, managing director of plant facilities, oversees the buildings on campus and said Westminster has been committed to building environmentally sustainable facilities since the completion of the Meldrum Science Center.

Both Driggs and Brockmyer said the college would welcome input from the Sustainability Council on the Jewett expansion.

“[Westminster] is more than open to discussing,” Driggs said. “That is the commitment of the college: our buildings, new buildings that are built, will be sustainable.”