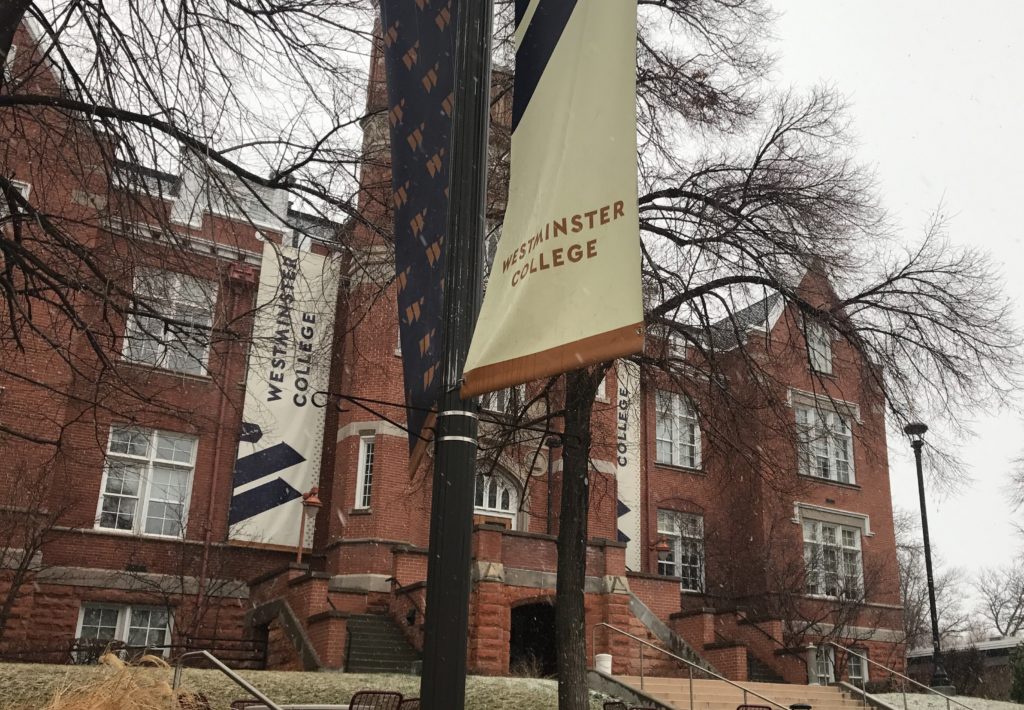 Snow falls on Saturday at Westminster College, which is conducting a search for a new president to replace Steve Morgan, who announced his decision to retire in September. Unlike past searches, this one is closed to those outside the President Search Committee, meaning most members of the Westminster community will not meet the candidates on campus or help determine who the new president will be. (Photo by Jacqueline Williams)

Westminster College is in the process of choosing its next president in a closed search, where only those on the Presidential Search Committee will be involved in the decision.

That means most members of the Westminster community will not meet the candidates on campus or help determine who the new president will be. Instead, they’ll find out who was chosen when the search is over and the Board of Trustees announces its decision — a process that has raised concerns for some.

“We all believe that we at least at some point in an open search are able to talk with the candidates and air our grievances along with our love for Westminster College, and the things that we like about it and the things that we think are going wrong,” said Gretchen Siegler, an anthropology professor who has been at Westminster since 1994. “We don’t have that opportunity [in a closed search].”

Mark Rubinfeld, a sociology professor and faculty senator at Westminster, added that the process is a bit unusual.

“With the exception of [current President] Steve Morgan’s promotion to president from interim president, every presidential search I’ve been a part of in my 14 years at Westminster and prior 16 years in academia have either been open searches throughout the entire search process or, at least, once the finalists were chosen,” wrote Mark Rubinfeld in an email to The Forum.

Morgan announced his decision to retire in September, after 37 years at Westminster and three years as president.

The Presidential Search Committee was formed soon afterward. It was initially comprised of members of the Board of Trustees and other college representatives, including Marco Barker, an administrator; Karnell Black, a staff member; Tim Carr, a faculty member; Jim Clack, an emeritus trustee; Cozy Huggins, a senior political science major; Jessica Johnston, a faculty member; and Lesley Manely, an alumna.

Open visits are “crucial in the success of the search process” for new collegiate leadership, according to the American Association of University Professors (AAUP), as they provide opportunities for the college community and candidates to “determine each other’s suitability” and can aid in the committee’s final decision.

But Huggins noted there are also benefits to having a closed search.

The AAUP notes that searches may require “some measure of confidentiality” early on because early disclosure “can result in the loss of the best candidates,” who may not want their current employers to know they’re on the market.

The college added more stakeholders to increase representation on the search committee in February. These additional representatives were Jen Simonds, a faculty member; Kerry Case, a staff member; Heather Batchelor, a faculty member; Chett Boxley, an alumni; Elaine Sheehan, a senior; Melanie Agnew, a dean; and Curtis Ryan, an administrator.

“I think that it’d be nice to get more student voices involved by opening it up, but I honestly think that, you know, reaching out to student government and having a student on the committee for the entire process is a really good way of doing that anyways,” said Sheehan, the ASW Clubs president. “I think that enough voices have become a part of the process that it’s okay that it is closed in this way.”

After becoming part of the search committee, Carr said he and Johnston spoke with different faculty groups and found “there were some concerns from different groups — board, faculty, students — that the process was closed.”

The job of the Presidential Search Committee is to narrow the pool down to the best two to four candidates. They determine this by reading cover letters, resumes and applications, interviewing candidates and talking to other community members to gather their ideas and needs. After the Search Committee chooses the final candidates, the Board of Trustees votes and makes the final decision.

“It’s been an interesting process; it really has,” Carr said. “I think what’s been refreshing for me is everybody on the committee has the same goal in mind. We want to find the best person possible who can lead us into the future.”

The President Search Committee, with the help of the additional stakeholders, narrowed the pool of candidates down to four finalists. The full Board of Trustees will then vote on those chosen finalists to pick the new president of Westminster College without the majority of campus interacting with them.

“Every member of the Westminster College community is a stakeholder in the final outcome of this presidential search,” Rubinfeld wrote in an email. “And as stakeholders, we will never know anything about the three final candidates that were passed over when the next president of Westminster College is announced. Who were they? What did they have to offer?”

According to an announcement made on Westminster’s website by Preston Chiaro, the chair of the President Search Committee, the Board of Trustees will announce their decision in the next few weeks.

“Whether we may agree or disagree with the process that got us to this point, I think all of us can agree that the main task at this time is for the Board of Trustees to carefully select, and then for all of us to warmly welcome, the final finalist as the new president of Westminster College,” Rubinfeld wrote in an email.

Correction: A previous version of this article misspelled the name of the alumna representative on the search committee. She is Lesley Manely.