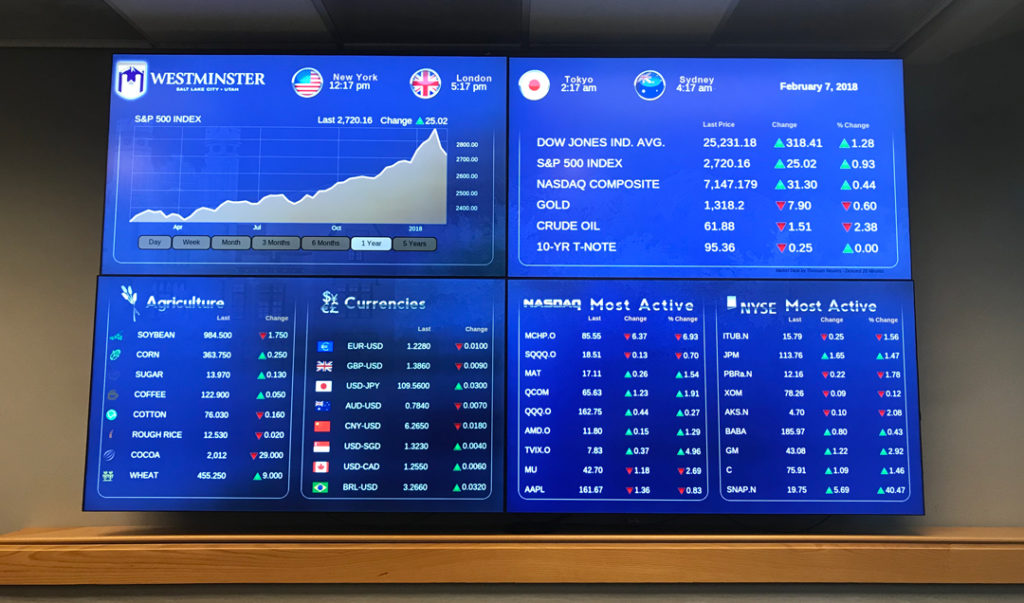 In the Center for Financial Analysis lab at Westminster College, a wall covered with only a television screen shows global market trends. Some students at Westminster have joined the international cryptocurrency trend in hopes of making some extra cash. (Photo by Traci Kenner)

Once reserved for the dark web and black markets, Bitcoin has become the buzzword of the year — including at Westminster College, where several students said they are interested in putting money into the unregulated tender that may change the way currency works.

Bitcoin, a form of cryptocurrency, scaled from $900 to almost $20,000 in 2017 and the buzz began, according to Fortune magazine. However, Bitcoin dropped back down in January and lost over half of its value.

“I think [cryptocurrency] provides students a great opportunity to jump into a speculative boom and try to figure out how to come on top,” said Colton Williams, a senior finance major, in an email. “I personally have been in and out since late July and have had my ups and downs; I know there are other students who can say the same and it’s an exciting phenomenon to observe and to participate in.”

Though some are concerned about investing in Bitcoin because of the wide range between its highs and the lows, others said they are excited at the prospect of making money.

“Personally, I don’t think crypto is going anywhere, especially the blockchain technology that several cryptos are based off of, but as all markets go, they will undoubtedly have their ups and downs,” Williams said.

Weston Lackey, a senior finance major, said he was eager to invest in many cryptocurrencies — including bitcoin, litecoin, ethereum and ripple.

“Ethereum and litecoin were among my best earners while my other positions resulted in little to no gain or losses,” Lackey said in an email. But, he wrote, “depending on your trading platform, cryptocurrency trading can entail high transaction fees for both buying and selling. As the stock market has had a strong bullish run before the most recent correction, I got out of all my cryptocurrency positions and moved funds to market index positions.”

Hopping on the cryptocurrency bandwagon just “because you think you may ‘hit it big’” may not be the best plan, Lackey said. Instead, he said he suggests doing research, talking to others and then making a decision.

Alex Higgins-Lopez, a senior finance major, said he agrees, and while there’s money to be made from cryptocurrency, it should not be used as an investment tool.

“Markets are unpredictable and volatile,” he said in an email. “I would not recommend anyone investing a meaningful amount of money in cryptocurrencies unless they are comfortable with losing most of it.”

Experts from Westminster have a similar outlook.

“Sometimes a few people are lucky and do well, and at some point some people are going to be sorely disappointed as they have been in the past,” said Richard Haskell, a finance professor at Westminster. “We are not seeing the first surge in bitcoins.”

Some Westminster students who are spending money on cryptocurrency are going to Jon McKenzie, the investment center financial coordinator, wondering what to do with their new digital coins.

“Prices of cryptocurrency have gone up just so high, and [students] hear they can make a ton of money off of it and they want to be a part of it,” McKenzie said.

Bitcoin started out as .08 cents in 2011. Today, the price of one bitcoin equals over $10,000 on a currency converter like Google. Yahoo Finance also has an entire section of its website designed to follow the fluctuating prices of cryptocurrency.

There are over 100 brands of cryptocurrency, and “every time you breathe,” a new cryptocurrency brand is being marketed, Haskell said.

Because cryptocurrency is not supervised by any regulated law, there is no insurance policy if hackers steal account information. The US dollar has the federal reserve as monetary insurance; bitcoin has blockchain, a set digital ledgers that record all transactions. Since the digital ledger is unregulated, it leaves cryptocurrency to be used in “unsavory ways,” Haskell said.

Bitcoin is decentralized because of blockchain. That could be a positive, experts say — “limiting central bankers’ ability to damage economies by printing too much money; eliminating credit-card fraud; bringing the unbanked masses into the modern economy; giving people in unstable economies a safe place to park their money; and making it cheap and easy to transfer funds,” according to a recent article in Wired magazine.

But overall, the reason bitcoin and other cryptocurrencies are currently popular is because of other people, Haskell said.

“You’re just ascribing value to something else that someone else has ascribed value to.”

The Dutch Tulip Mania is one of the first examples of an economic bubble — and the tulip craze of the 17th century was the first recorded market crash. That could be similar to what is happening now with cryptocurrency. As the currency continues without legal backing or monetization, it looks more and more like a tulip, Haskell said.

“[The cryptocurrency market] is more of an entertainment,” he said. “Students should not see bitcoin as an investment but more as a way to gamble. And there is no value to this tulip and there is a real risk.”