Every fire season is different but they tend to follow a similar pattern, releasing large amounts of smoke into the air which the Westminster students say impacts their daily lives and health.

There are about 222 active fires in Utah as of Oct. 10, according to the Fire, Weather and Avalanche Center. In the area from Tooele to the Unitas and Salt Lake City to Nephi, there are 11 active fires with over 1,000 acres burned each. Those 11 active fires total 255,000 acres.

“This fire season has been a lot busier,” said Jason Curry, public information officer for Utah Division of Forestry, Fire and State Lands. “We have had more complex fires and a lot of fires in heavier timber.”

According to USDA Forest Service Fire Terminology, complex fires are “two or more individual incidents located in the same general area which are assigned to a single incident commander or unified command.” And heavy fuels, which burn more slowly, are “fuels of large diameter such as snags, logs, large limb wood.”

The Utah Division of Forestry, Fire and State Lands never passes up an opportunity to remind people that it is still dry out, Curry said.

“We want to urge people to be careful with the campfires and with motorized vehicles, or anything else they may be doing traveling, working or recreating outdoors,” said Curry. 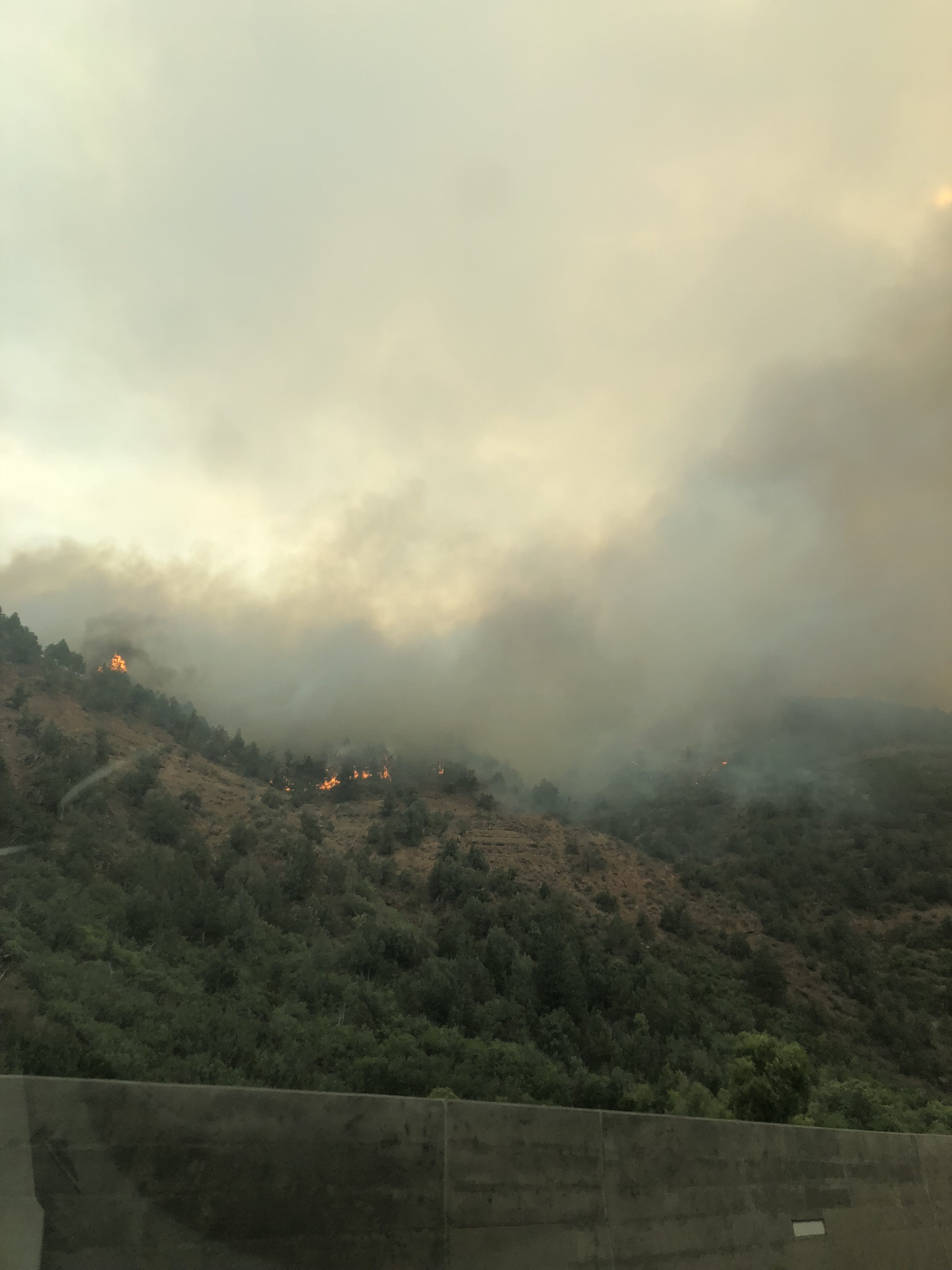 Coal Hollow Fire closes part of U.S. Highway 9 while burning in Spanish Fork on Aug. 12. There are about 222 active fires in Utah as of Oct. 10, according to the Fire, Weather and Avalanche Center. (Photo by Makayla Kirk)

“You can’t get out of the smoke,” said Stephanie Nagata, director of Student Health Services and family nurse practitioner. “Even if it is not highly visible it can still be in the air.”

Many Utahns, in the winter, travel up the mountains to get out of the smog, however this is not possible in the smoke, Nagata said.

“These particles in the wildfire smoke cause irritation and health problems, both acute and chronic,” said Nagata. “The smoke in the air affects everyone but the most affected though are the elderly, young children, those with asthma, diabetes, cancers, immune compromised, and [chronic obstructive pulmonary disease (COPD)].”

Working out in wildfire smoke is unhealthy for the lungs, said Laura Iverson-Bastiani, assistant director of Fitness, Wellness and Recreations.

“When we exercise, we breathe in through our mouth rather than our nose so we miss out on that first level of protection,” Iverson-Bastiani said. “We are breathing deeply as we exercise so the smoke particles actually travel deeper into the lungs.”

Moderate exercises in a building that is tightly sealed and filtered well is ideal, said Iverson. She said the Health, Wellness and Athletic Center (HWAC) is airtight with no open windows and one door meaning it is a good place to workout when there is bad air quality.

All students have a membership to the HWAC included in tuition and fees, and faculty and staff are offered free admission to HWAC on red air days, said Traci Siriprathane, director of Fitness, Wellness and Recreation.

Some Westminster students said they are aware of the smoky air from the wildfires and said it is affecting them. 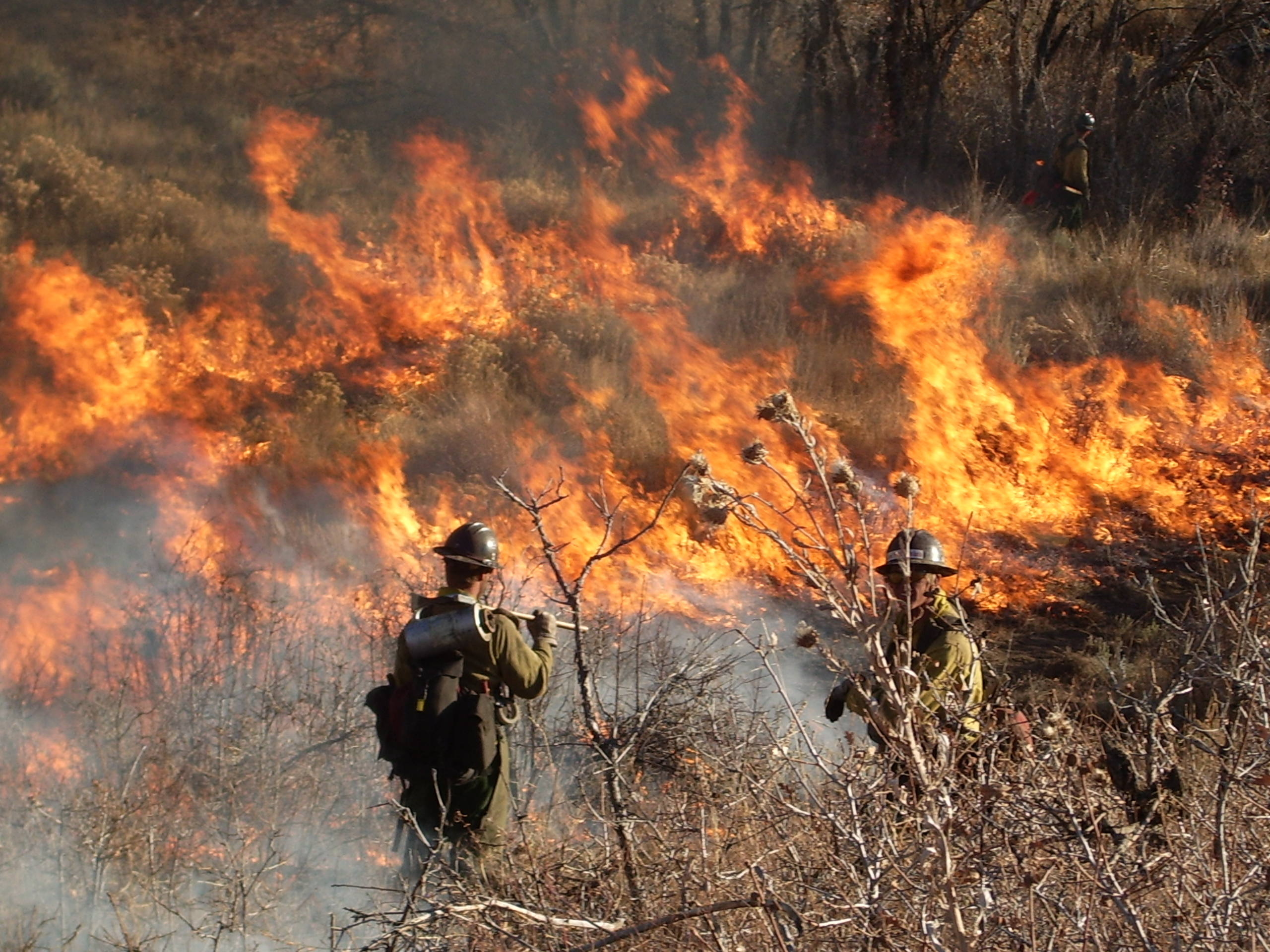 “Everything we breathe in the air goes into our lungs and that impacts us permanently,” said Izzie Herzog, first-year music major and education policy minor. “[This] summer was the first time when I went out on a day where there weren’t regular clouds and the sun was so covered in smoke that it looked red and was not visible. […] It is definitely the worst I have seen in my life.”

Other students said they agree that the smoke is bad this year and said that it makes the air gross.

“I like to have my windows open and my balcony open,” said Omar Valencia-Garcia, junior English major and gender studies minor. “I live on the Draw. The smell isn’t like super bad but when it is there all the time, it can get overwhelming and annoying. It makes it harder to breathe sometimes.”

Some students said the smoke makes it harder to breathe so they’ve had to stay inside.

“I have asthma and on the days that it is bad, I can definitely feel it,” said Ben Stover, junior geology major and computer science minor. “I have to stay cooped up in my room or else I have an asthma attack.”