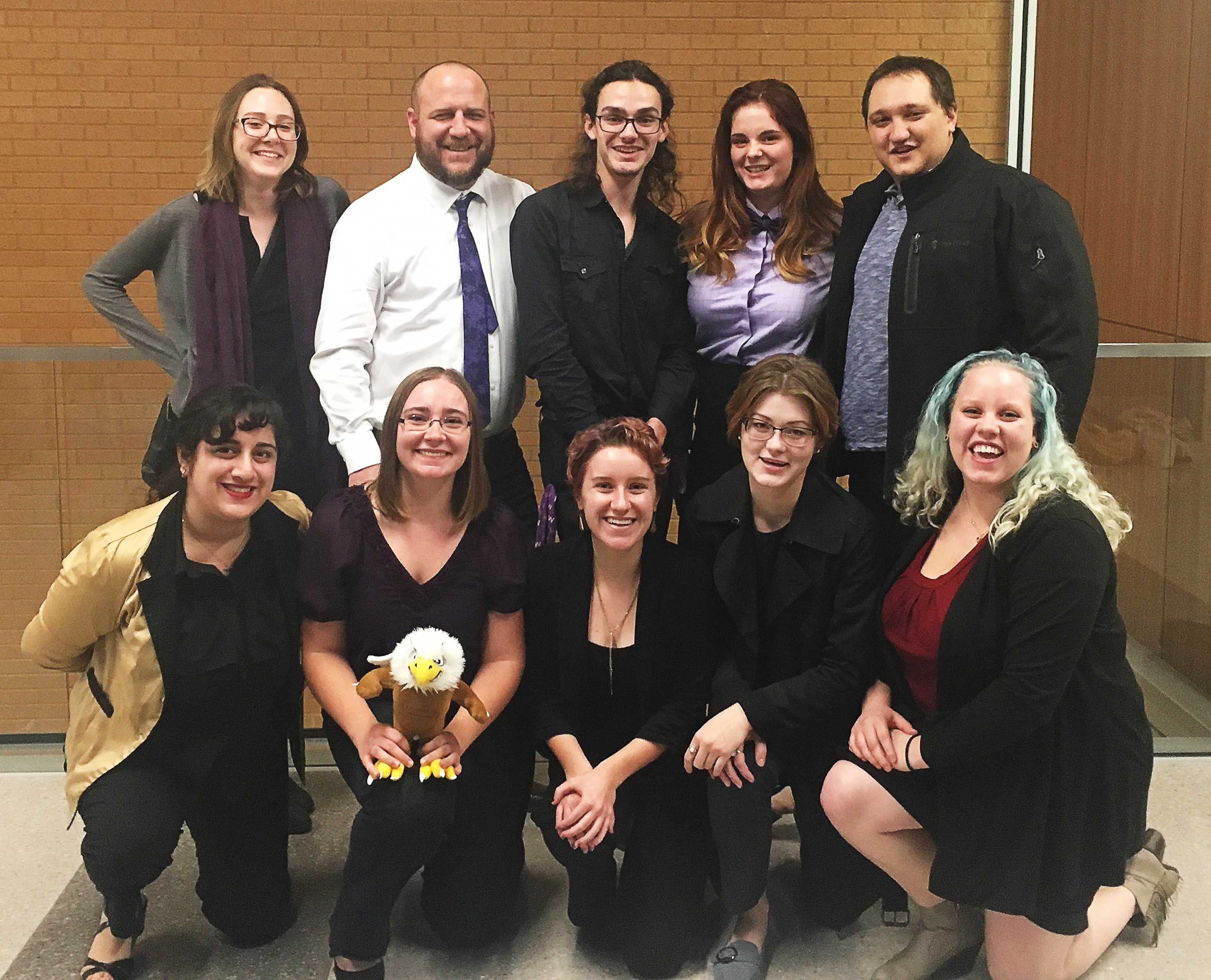 The Westminster College’s Ethics Bowl team gathers after its win at the regional competition at Utah State University in November 2017. The Griffins will advance to the national Intercollegiate Ethics Bowl Competition this spring, held in Chicago, for the second time in four years. (Photo courtesy Kaytlynn Scott)

For the second time in four years, the Westminster College Ethics Bowl team will move on to the Intercollegiate Ethics Bowl Competition this spring in Chicago.

“I’m both nervous and excited [for nationals],” said Kaytlynn Scott, a junior philosophy major. “I’m so excited to go and compete with my team, but I’m really nervous, too, because competitions are always nerve wracking.”

Ethics Bowl is a tournament-style event similar to debate where teams of three to five students respond to specific ethical questions from judges on real, contemporary cases or issues. Each round uses a different case, with topics ranging from mental illness and gun control to politics and euthanasia.

During the competition, students demonstrate their ability to understand the facts of the case, articulate the ethical principles involved, present an argument about how the case should be resolved and respond to questions by the opposing team and panel of judges, according to the Association for Practical and Professional Ethics.

“It’s competitive, so that’s how it’s like debate, and these sort of topics and issues look sort of like debate topics can, but it’s cooperative,” said Barnette, associate professor of philosophy. “You get to look at philosophical issues in more interesting and in-depth ways and learn how to analyze things philosophically with other people rather than just deciding ‘this is what I believe in.’”

“At the national tournament, you have a bit of that but you also have judges that are from corporate America or politics. You have people outside of academia judging, and the way they judge versus the way a professor judges is very different.” — Dr. Kara Barnette, associate professor of philosophy

The team studies the potential seven to eight cases in advance and uses the months prior to competition to prepare frameworks. Specific questions are unknown until the judges ask — as opposed to debate, where teams argue a specific side to an issue, typically affirming or negating a resolution.

Scott, who joined the team her sophomore year, said the most rewarding part about Ethics Bowl is that everyone gets to compete.

Gano Hasanbegovic, a senior philosophy and psychology major, said the team tends to structure its arguments differently from other schools in the region. Westminster’s team uses ethical theories that are more complicated and not as well known as others, he said — in particular, feminist theories.

“It’s a big influence from our coaches and from our liberal arts framework compared to a lot of the state schools, who focus on the big theories that everyone learns: those masculine philosophies like [Immanuel] Kant, [John Stuart] Mill, [Thomas] Hobbes and [John] Locke,” said Hasanbegovic, who joined the team as a way to prepare for law school.

The team argues the majority of cases using types of feminist care ethics, which focus on individual and community relationships.

“I don’t think we have a single case where we don’t try and use care ethics,” Hasanbegovic said.

Looking forward to nationals, the team now has new cases to prepare before traveling to Chicago in March. Though they won over the judges at regionals, doing the same at nationals may be more challenging.

“At the regional tournament, the judges are professors, graduate students and people who are familiar with ethics in an academic setting,” Barnette said. “At the national tournament, you have a bit of that but you also have judges that are from corporate America or politics. You have people outside of academia judging, and the way they judge versus the way a professor judges is very different.”

“I’m so excited to go and compete with my team, but I’m really nervous, too, because competitions are always nerve wracking.” — Kaytlynn Scott, a junior philosophy major.

Hasanbegovic and Mariah McCoy, a senior global environmental justice custom major, joined as first-year students and went to nationals in 2015.

“We were the babies, we were the young ones — so that was a little terrifying,” McCoy said. “This time, I’m one of the older members, so I have to keep it together and help everyone stay calm.”

Though the team is comprised of ethical experts, Barnette said students have a range of majors, and few join knowing much about philosophy or ethics.

“People assume you have to know things about ethics and ethical theory before you’re on the team, but no.” she said. “Most of the students have never even taken an ethics class when they join.”

Echoing Barnette, Scott said someone looking to join the team should be “willing to learn, willing to have your views challenged and willing to discuss your views with people who have different ones.”

For more information or to join the Ethics Bowl team, contact Barnette or visit the group at the Clubs and Orgs fair each fall.