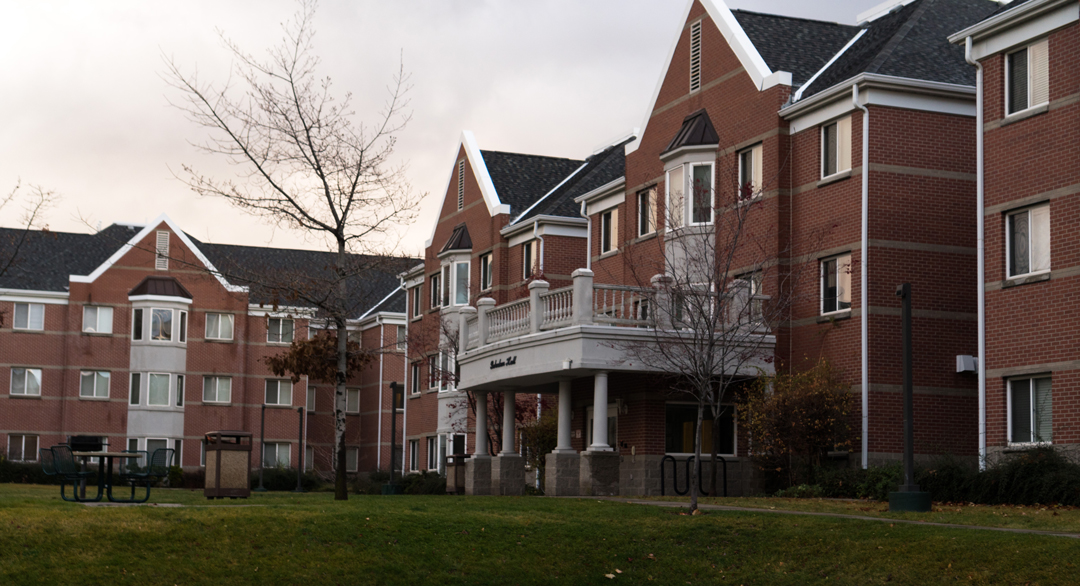 A November 2017 file photo shows two of five on-campus dorms at Westminster College. A former student claimed in a lawsuit filed Feb. 28 in the U.S. District Court in Utah that Westminster failed to comply with a protective order when it placed her alleged attacker in a dorm through which he could see into her bedroom window. (Photo by Berin Klawiter)

A former student filed a lawsuit against Westminster College in the U.S. District Court in Utah on Feb. 28, alleging sex and disability discrimination in violation of federal law and a hostile educational environment that forced her to withdraw from the college.

Kennedy Flavin, who was a first-year student and an elite-level player on Westminster’s lacrosse team, claimed in the lawsuit that the college had failed to respect a protective order against her perpetrator, who she said raped her in 2015, when they were both minors and in high school. The complaints were first reported by The Salt Lake Tribune.

Flavin, the only deaf lacrosse player in Utah, also alleged the college had failed to accommodate her disability. The lawsuit noted, for example, that campus security “has no mechanism in place for a student who is Deaf, and cannot call using the telephone, to contact them” and that the college had either refused or failed to instate a proper adaptation.

“Westminster takes these allegations very seriously,” said President Steve Morgan in a prepared statement. “Every student who files for disability accommodations is handled on a case-by-case basis. Our disability staff provides individualized attention to ALL students who make these requests, and a special plan is crafted to help meet their unique needs.”

A college spokeswoman declined the opportunity to comment further, noting on Saturday afternoon that the college had not yet officially been served with the complaint.

Flavin directed questions to her lawyer, Dale Boam, who did not respond to multiple requests for comment on Monday.

The lawsuit says Flavin chose Westminster because she felt its small class sizes would better accommodate her disability and because she had worked previously with one of the lacrosse team’s coaches, Maggie Herrneckar, who was used to “implementing accommodations for on field communication.”

But after committing to the school with a $19,000 a year scholarship, the lawsuit alleges Flavin learned that the boy who raped her in high school had decided against enlisting in the Marines and would be attending Westminster, as well. He was placed in a dorm directly across from hers, in violation of a mandate that he be 100 feet away from her at all times, the lawsuit alleges.

“The Defendant Westminster College unreasonably choose to measure the distance by the length of a sidewalk with a 90 degree turn instead of the actual distance between the housing units” to comply with the protective order, the lawsuit states. “This allows the perpetrator to literally look in the Plaintiffs window.”

Flavin’s alleged attacker then joined the men’s lacrosse team, and the lawsuit says the college was “resistant to aid in enforcing the temporary order” she had filed against him that mandated he be 100 feet away from her at all times.

Westminster chose not to move her attacker to a different dorm out of concerns about violating his privacy, and college officials seemed more concerned about his value as an athlete to its lacrosse program than to Flavin’s safety, the complaint alleges.

“On more than one occasion Defendant Westminster College stated how valuable the Perpetrator was to it Lacrosse program, which could only be interpreted to mean that the Plaintiff’s her [sic] value as a female athlete was less than that of her Perpetrator.”

While on campus, the lawsuit alleges Flavin felt vulnerable to her perpetrator because of her communication barriers. She “rarely slept in her dorm, attended few school activities, and had a harder and harder time being on campus let alone attend class,” as a result.

Flavin eventually withdrew from Westminster and lost her scholarships, the lawsuit says, leading her father to sell his house to pay the costs of her studies.

The complaint states that Flavin ultimately hopes to receive financial compensation for lost scholarships and employment opportunities and the costs of transferring to another college, of treatment, therapy and obtaining an attorney.

The college is currently under investigation for an OCR complaint filed in October 2017 on the basis of disability-accessibility, according to a searchable database of open investigations. The listing provides no additional information about who filed the complaint or the specific details.

Westminster was recently cleared of an investigation initiated in 2015, in which a student said the college had mishandled a 2013 case. The OCR closed its investigation in October, concluding there was “insufficient evidence to establish that the college discriminated against the complainant,” according to its decision letter.

ASW President Sabi Lowder, a victim advocate, said she has watched Westminster take strides toward creating a more positive environment, through initiatives like including more survivor resources on its website.

“These cultural things definitely matter and they have made a difference, but obviously not enough if we aren’t following through on the policy level and the procedural level — if we are having two students publicly leave because they don’t feel safe on campus,” Lowder said.

In 2017, a separate Westminster student told The Forum that she had left the college because of the way her Title IX case was handled.