Associate Professor of mathematics Sean Raleigh pulls out his academic regalia — the robes, hoods, and caps faculty wear at graduation and commencement — from his office closet to get ready for the inauguration of President Dobkin. He smells it to makes sure there isn’t a lingering odor since it has never been sent to the dry cleaners. Ever. He puts the dark blue robe and octangular tam or cap on and thinks back to when he purchased it.

Raleigh bought his regalia while attending graduate school at the University of California San Diego.

“Faculty members were like, ‘Oh you got to get regalia. You are gonna get an academia job and go to graduation every year, like you need to order this,’” Raleigh said.

When Raleigh came to Westminster College and attended his first convocation as a professor, he was told, “You don’t need your own regalia, we just rent it.”

But every time convocation or graduation roles around Raleigh “wears the heck out,” of his $600 regalia.

Raleigh said the regalia isn’t hard to wear except for folding the hood, the colored part on the back of the robe. He said he typically asks for help from faculty members who know how to fold it. The only thing that makes it annoying to wear is the heat and large amount of time spent in the robe, said Raleigh.

Faculty and students sit, usually in the heat, for about three hours listening to different speakers, according to Raleigh.

“The regalia is big enough and wide enough that I can usually take a fairly thin book and stuff it down the back of my pants and without it being detected,” Raleigh said.

Raleigh said he puts on the gown and proceeds to commencement without anyone knowing.

“Then when it is super long and tedious I just pull [the book] out. That’s my regalia secret,” Raleigh said. 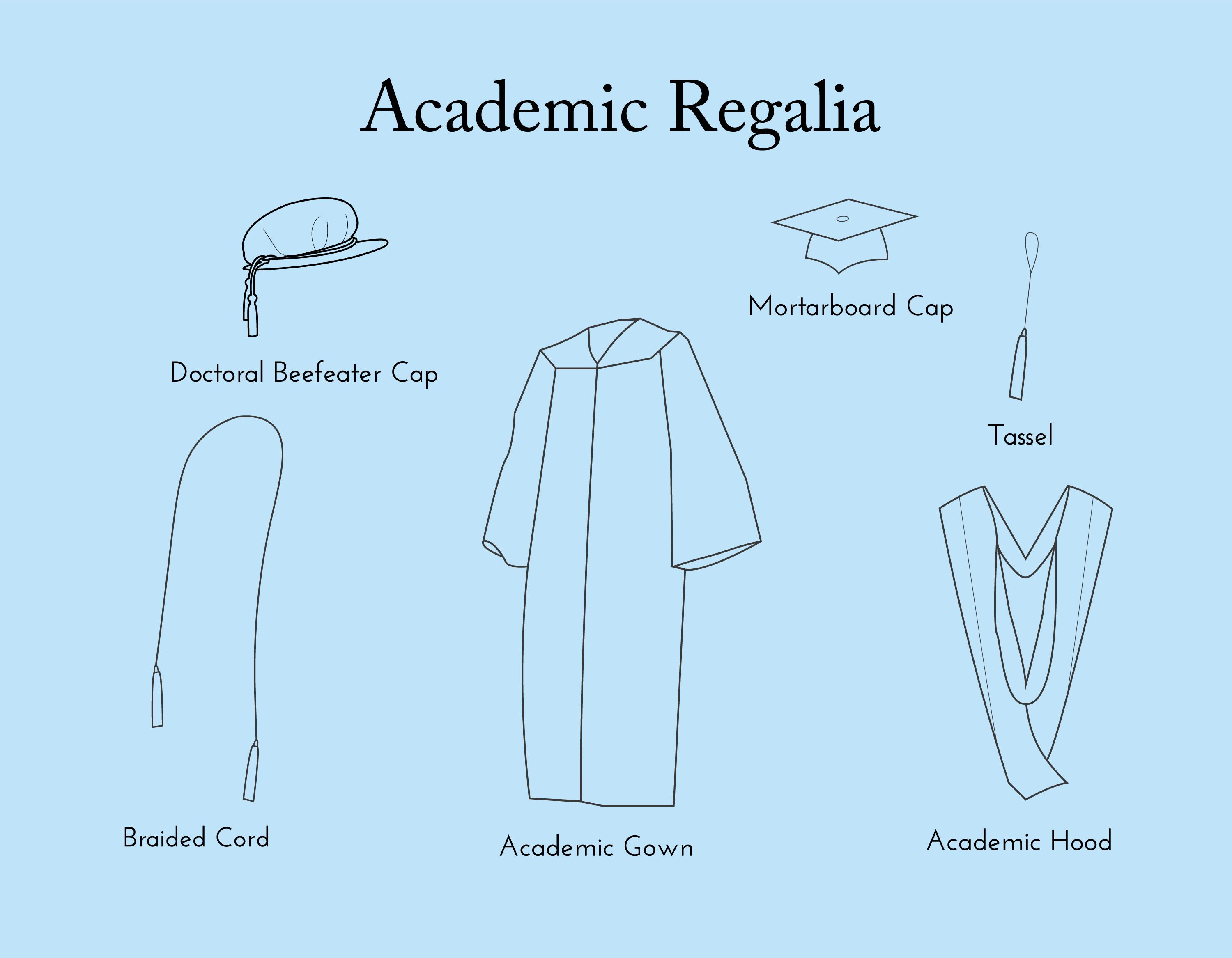 History of Regalia in Academia

Students and faculty would wear regalia as a sign of rank, class and education levels, according to Mary Jane Chase, professor of history.

Since the Middle Ages, regalia has changed colors but the basics are still the same, according to Chase.

“Gowns were designed to tell you which group of people belong to what rule and also within the university to show the hierarchy of who is who in the university,” Chase said.

Originally everyone had black gowns but now universities have school colors, according to Chase. Chase herself owns light blue regalia which she received when she earned her degree Columbia University.

Lance Newman, dean of the School of Arts and Sciences, owns dark brown regalia with a four cornered tam, which he received when he earned his doctorate degree at Brown University.

“Academic robes were originally monk outfits in monasteries in Northern Europe, they were designed to keep you warm on a cold winter’s day,” Newman said.

Regalia is something that academic institutions have kept throughout the centuries to carry on tradition, according to Newman.

“Universities are really ancient institutions,” Newman said. “I think it is pretty cool that we have managed to carry not only some of the clothes we wear, but the ideas we managed to carry forward through hundreds and even thousands of years. There’s not many institutions in society that can make that kind of claim.”

Legacy of Misogyny Represented in Regalia

In the Middle Ages, women were not admitted to universities in Europe, according to Mary Jane Chase, professor of history.

“The most educated women of that day, however, did wear a kind of robe, Chase said. “Most educated women in the Middle Ages would have been nuns and abysses and they wore outfits that identify them specially in their vows to the church.”

The fact that women have not always been welcome in academia and is made clear by how regalia is designed for men, according to Kara Barnette, associate professor of philosophy.

Barnette owns dark green regalia, which she received when she earned her PhD, at the University of Oregon. When a student earns a PhD there is a ceremony called “hooding” where a person with a PhD “hoods” the new PhD recipient. The hood part of the regalia is meant to attach to a button up shirt.

“If you are a woman you quickly discover the regalia is made for men,” Barnette said. “There is this loop for the hood to go around a button on a dress shirt to keep it from choking you, and women have to wear formal attire, so a dress, so there is nothing to hold that loop.”

The loop is just one thing that Barnette said reminds her that regalia was not made for her.

“When I put it on I am like ‘ohhh, this is a job I wasn’t originally designed to have back in the Middle Ages’ and you look ridiculous carrying a purse with it,” Barnette said.

Chase disagreed with Barnette and said being choked by the hood of your robe was common in the Middle Ages and now some people put a button on the gown to hang the hood.

Why Regalia Differs Person to Person 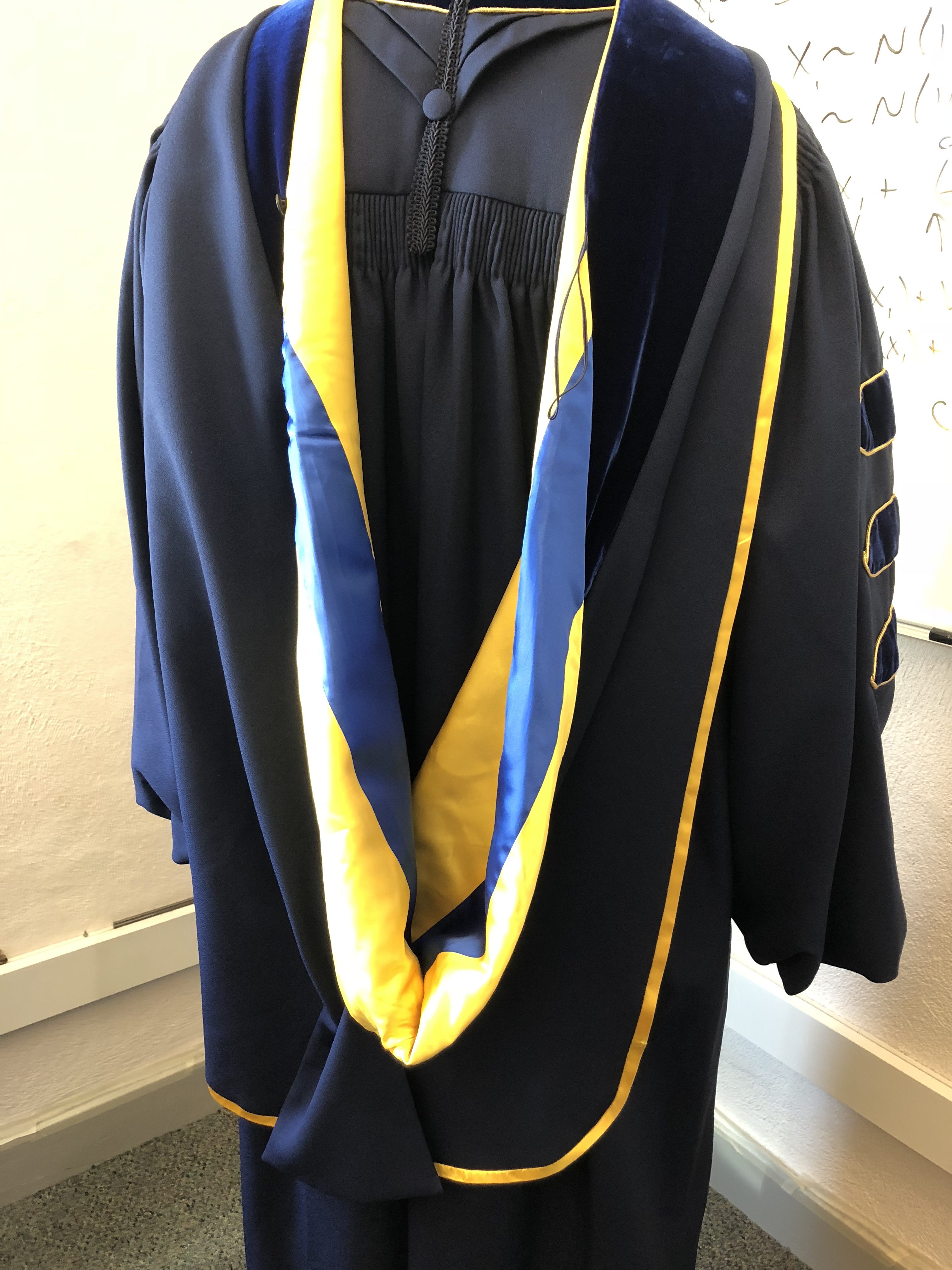 A close-up photograph of the hood on the back of Associate Professor of Mathematics Sean Raleigh’s regalia in his office in Foster Hall on Oct. 31. The yellow and blue colors of the hood represent the fields of education and mathematics. (Photo by Makayla Kirk)

Most universities have their own colors for robes to distinguish their graduates, according to Kara Barnette, associate professor of philosophy.

For instance, University of Oregon is dark green, according to the university’s regalia webpage. Harvard’s is crimson. University of California San Diego’s is dark blue.

According to American Council on Education (ACE), robe sleeves are pointed for bachelor’s degree, oblong for master’s degree and bell-shaped for doctorate’s degree.

The hood of the robe signifies the university conferring the degree to the recipient, according to ACE. The hood is the piece on the back part of the regalia that hangs down and the length of the hood depends on the degree level.

Orn Bodvarsson, dean of the Gore School of Business, attended Simon Fraser University in Burnaby, British Columbia for his PhD. Canadian universities tend to have different traditions regarding regalia than their United States counterparts, according to Bodvarsson.

Bodvarsson’s regalia is red with a beefeater cap, a cap that signifies a doctorate degree that is plush fabric with a stiff brim. This cap is relatively typical for graduation ceremonies at universities in the United Kingdom and former British colonies, said Bodvarsson.

Every year Westminster College faculty gather together in regalia for commencement and graduation, two ceremonies that mark achievement in a college student’s life. This year a special ceremony was added to the list — the inauguration of President Dobkin.

Many faculty members rent regalia through the school’s rental company, Herff Jones, according to Karnell McConnell-Black, interim vice president and dean of students.

Westminster has a login system where the Dean of Students Office puts in all relevant information for each individual faculty member including height, degree and the schools they attended, according to McConnell-Black.

McConnell-Black owns a book with colors from the different universities, colors of disciplines and descriptions of the gowns for renting purposes.

“Faculty don’t pay for [rental regalia],” McConnell-Black said. “The college pays for it. And that’s the same for the students, we pay for it.”

Many colleges around the U.S., as well as other countries, honor this centuries-long tradition of professors wearing academic regalia. But why is this tradition something that is still performed in the 21st century by colleges all around the world?

“We are steeped in tradition and I think the academic setting is one that likes to carry on sort of pompous traditions,” said Sean Raleigh, associate professor of mathematics. “It sort of seems to lend a sense of legitimacy to the whole proceedings like this is a recognition that you’ve gone through this torturous however many years of graduate work to get the PhD and this is sort of a recognition that you are ‘special.’”

In at a time when people think going to college is just about getting a job, Associate Professor of philosophy Kara Barnette said regalia is a symbol of the larger purpose of education.