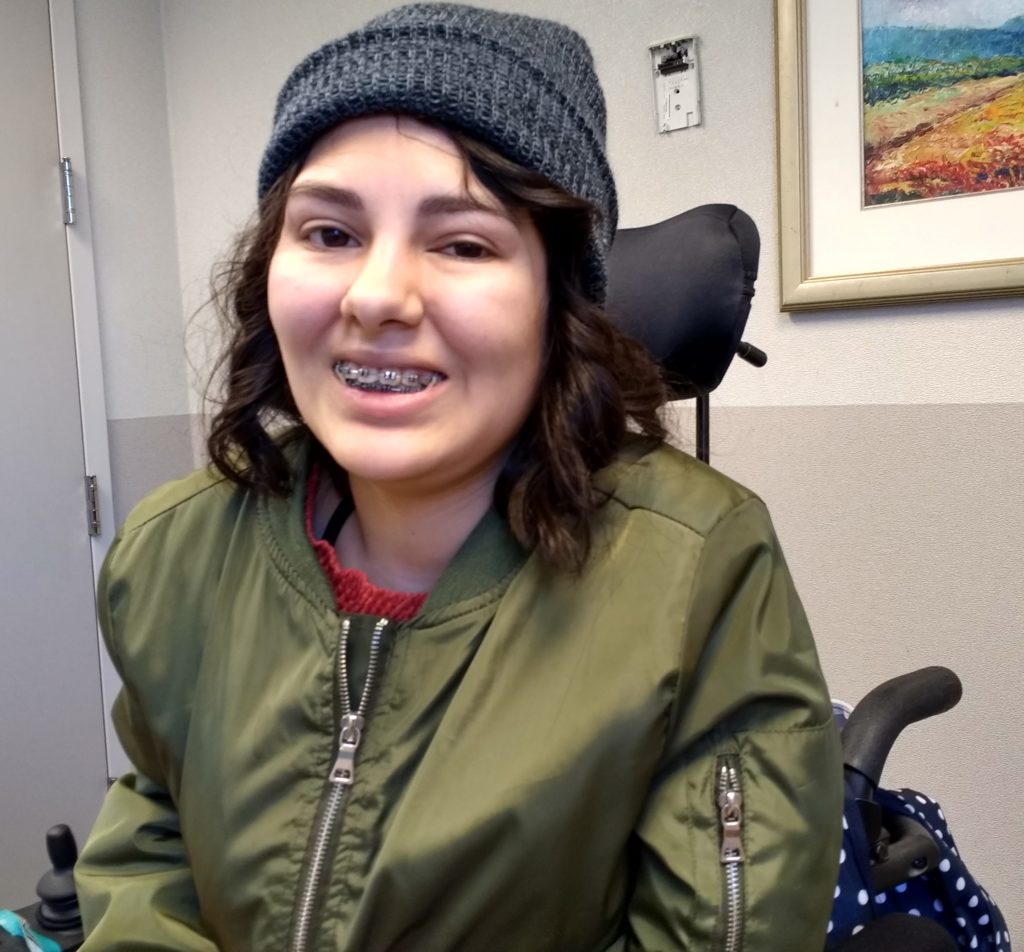 Melissa Salguero, a sophomore English and theatre major had her first taste of slam poetry just a year ago and now uses the medium to explore and share her experiences with identity. Slam poetry is a style of competition and performance art where poets share their work without props or cues, and Salguero said she writes primarily about God and war. (Photo by Brenna Hart)

Members of Westminster College’s slam poetry team traveled across the country on April 2 to compete at the College Unions Poetry Slam Invitational (CUPSI) — an annual collegiate slam poetry tournament. The competitive event, held in Philadelphia this year, also offers students the chance to share their art.

Melissa Salguero, a sophomore English and theatre major and a member of Westminster College’s slam team, attended this year’s event. Though she had her first taste of poetry just a year ago, she now uses the medium to explore and share her perspectives on identity through verse.

“She writes a lot to her an experience, which is an experience that none of us can really write about because she’s so individual,” said Enan Whitby, a Westminster student who is Salguero’s friend and teammate.

Slam poetry is a style of competition and performance art where poets share their work without props or cues. Nicole Tyler, Westminster’s slam poetry coach and Salguero’s RA at the time, initially introduced her to the medium during her first year of college.

“My introduction was saying that I had a poem and Nicole Tyler put me in front of the mic at an event,” Salguero said. “It was a lot, but it was really fun. Ever since then, it’s all been downhill from there.”

The Forum spoke with Salguero about her experience as a slam poet and her creative process. This interview has been lightly edited for conciseness and clarity.

Q: How do you use poetry to communicate your perspective?

A: A lot of my poetry focuses on my identity. It focuses on me being a first-generation student, the struggles trying to navigate life and the microaggressions faced as a Hispanic woman. I use it to express what I’m feeling.

Q: Is there something you write about most often?

A: My friends like to tell me I have a God complex because in most of my poetry I either use war metaphors or God metaphors, which is really interesting because I come from Guatemala. My family and my history is very closely tied to the political turmoil there and the wars and the genocides there. I always write about war. But in the same breath, growing up in Utah, I write about religion a lot. So I always intermix the two.

Q: When did you first start writing poetry?

A: I want to say October of my freshman year. Life was just happening, and it was so much and I didn’t know how to deal with it. Nicole told me to use writing to process things and put my feelings out there in a way that’s constructive and allows you to tell your story or your truth without being something that’s damaging.

Q: Is your goal to have a career as a poet?

A: No, not really. […] But I definitely want to incorporate it more into my life because it’s had such an impact on me. I’ve found such a wonderful community and it really is a super strong support system. I want to stay in the scene and have the time to immerse myself in it.

Q: Do you ever get nervous during your slams?

A: Oh, always! My hands still lose feeling in them every time. I’m a theatre major, so I’m used to performing. But there’s something about slam poetry that’s a lot more vulnerable and a lot more raw. You’re up there speaking your truth. You’re essentially doing monologue of your experience. People know when you’re being truthful up there — they can see through you like that and they resonate with what you’re saying. You don’t want to rob them of that. So you have to just be open and willing to go out there and just speak, which is absolutely terrifying but wonderful.