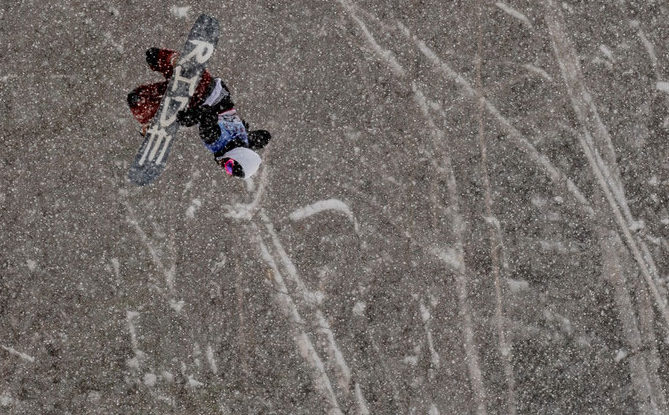 Rob Roethler, a junior business major and member of Westminster’s snowboard team, grabs his board during a slopestyle event at the U.S. Ski and Snowboard Association’s Collegiate National Championships in Lake Placid, N.Y. this March. Though the team competed in unusual events, the men’s team took second place overall for slopestyle. (Photo courtesy Cal Aamodt)

But because the team usually competes in rail jams and slopestyle, the new events left some of the riders feeling slightly out of place, said Cal Aamodt, who films the snowboard team. 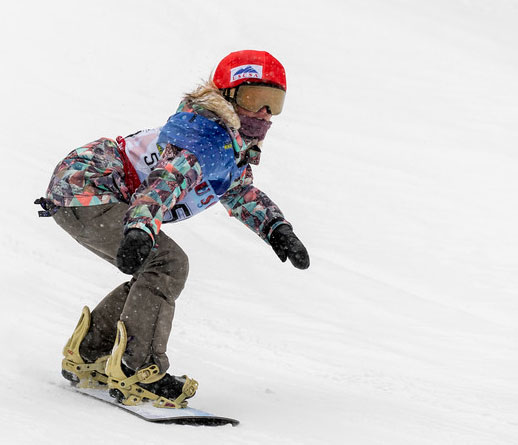 The championship was a five day event, where over 500 competitors competed in alpine, nordic, snowboard and freeski events, according to the United States Collegiate Ski & Snowboard Association.

Westminster’s snowboard team generally compete in slopestyle events, hitting jumps and rails rather then racing down a course. The riders also use different board set-ups than when they race, which makes riding in the park more difficult compared to their regular board set-up, team members said.

“It’s honestly extremely refreshing,” said Rob Roethler, a junior business major and member of Westminster’s snowboard team. “There is so much that goes into taking a simple turn that you never really think about when you’re hitting jumps and rails. When you are set up posi-posi on a board a couple inches longer than usual that’s built to stay on the ground, all that matters is board control versus your willingness to go fast.”

“Racing is definitely a new thing for me,” said Haille Soderholm, a senior neuroscience major at Westminster. “We are mainly slopestyle riders, so there’s a big difference in the atmosphere. It definitely teaches you to be a better overall snowboarder when you can race and do freestyle and it really pushes your boundaries, especially when you are competing against the hard booters who race all the time.”

Nationals concluded the snowboard team’s season, which will start up again Fall 2018.

“We have not done much racing as a team, so it’s interesting to see everyone compete in alpine,” Aamodt said. “We are one of the best snowboard teams in the country. When it comes to slopestyle and when you watch everyone do incredibly well in the racing events, it just goes to show how talented Westminster’s snowboard team really is.”