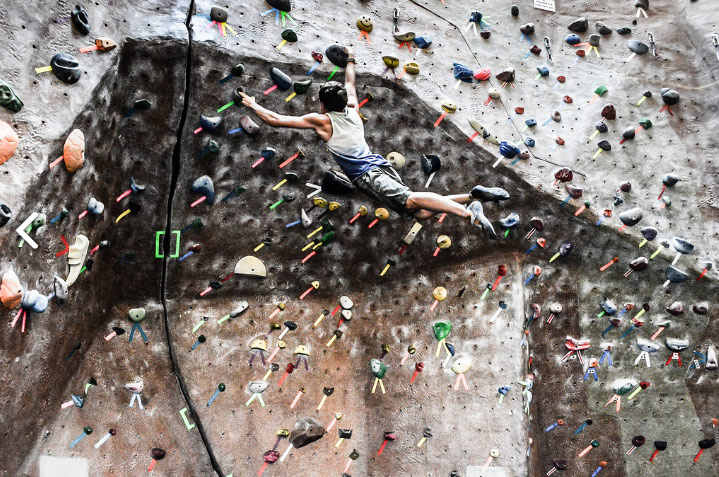 Cole Cooper, a junior political science major, climbs a route at Bishop’s Wall in the Health, Wellness and Athletic Center at Westminster College. Cooper was diagnosed with idiopathic scoliosis when he was 7 years old and said climbing has become a way for him to overcome problems with his back and spine. (Photo by Michael Dougherty)

For many students at Westminster College, rock climbing is a way to relieve stress and have fun. But for Cole Cooper, a junior political science major who was diagnosed with idiopathic scoliosis at age 7, it has also become a way for him to overcome the problems with his back and spine.

Scoliosis — an abnormal curvature of the spine — affects 2 to 3 percent of the population, or an estimated six to nine million people in the United States, according to the American Association of Neurological Surgeons. Though it can make some forms of physical activity more difficult for those with the diagnosis, close friends describe Cooper as an incredibly strong climber, nonetheless. 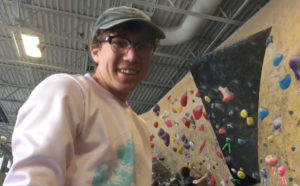 Cole Cooper, a junior political science major at Westminster College, smiles as he prepares to start a route at The Front Climbing Club in Salt Lake City on Jan. 27. Cooper was diagnosed with idiopathic scoliosis when he was 7 years old and said climbing has become a way for him to overcome problems with his back and spine. (Photo by Michael Dougherty)

“The way I see it, Cole has used rock climbing to really strengthen his back,” said Joe Kiffney, a marketing major. “It’s almost a form of [physical therapy] or protection for him. Having a fused spine definitely limits him from doing other kind of exercises and sports, so now he’s just poured himself into something he thoroughly enjoys and is now just absolutely killing it.”

When Cooper was 14, he underwent surgery to fuse 80 percent of his spine.

“A big part of my life since then has been dealing with my spinal fusion,” he said. “I have always been trying to overcome the challenges that having a fused spine can kind of give you, so that is why I started rock climbing.”

The Forum sat down with Cooper to discuss how he transcended these barriers and his passion for rock climbing. The interview has been lightly edited for clarity and conciseness.

Q: How did you feel going into your spinal fusion surgery?

A: I was scared, to be honest. You have to stay at the hospital for two months and you’re not allowed to leave, so it makes you feel a little stir crazy. It’s even more suffocating when you are reaching the deadline for the surgery. They have to prepare you for the worst, and the worst would be paralysis. You go into that situation very scared, and I was sure that something bad was going to happen.

Q: How did you feel after the surgery?

A: I could feel it immediately. My head kind of hurt and my back kind of hurt, but I had this sense of relief finally and I was so happy. You feel like you have been stretched out a couple inches — and I was. I think I grew 3 inches from that surgery.

A: The first week you are just trying to get adjusted to your body. A lot of it was learning how to stand up and walk again. I took a full year to recover to the point where thought I was capable of playing sports again, so I decided that I wanted to pick track and field, which was very hard on me. There was so much high impact that I couldn’t even absorb with my back, so I would put the weight into my shins, giving me shin splints.

Q: How has rock climbing helped you recover?

A: Rock climbing is an amazing workout for your abs and your back. It has allowed be to strengthen my back a lot and build that muscle around my spine so it can absorb this pressure that you can experience in your day to day life. What happens is that your spine is like a spring — so fall, and it compresses and then decompresses. Having a strong core helps support my lower back and I have a good upper body, which helps support the higher part of my spine.

A: I got into it from my philosophy teacher, who actually coached the climbing club, and I loved it. I loved climbing. I was so obsessed with it. I wanted to do it more and more. That is when I came to Westminster and really got into it. My first week at school, I probably went to the wall seven days in a row.

Q: What has your relationship with scoliosis and rock climbing taught you?

A: I would never say that I wish I never had scoliosis because it allowed me to get into climbing and it challenged me to strengthen myself. It allowed me to live a fuller life than the doctors proposed. I thought I would never be able to walk/run again. I always kind of listened to my body but I wanted to move beyond the diagnosis and live the best life that I can.