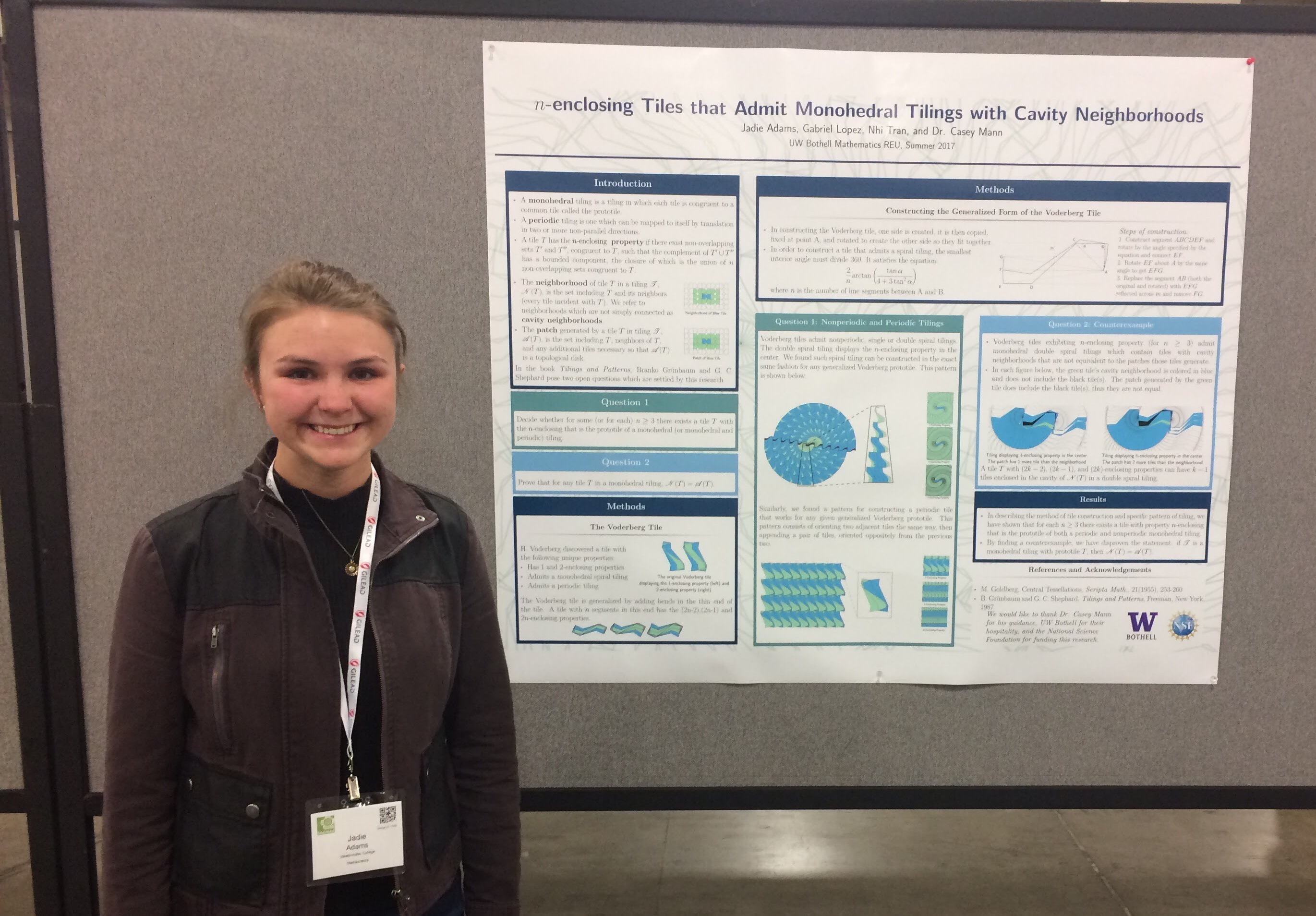 For Jadie Adams, a senior math major and physics and computer science minor at Westminster College, it’s not uncommon to spend one day painting murals for the Humane Society and the next answering unsolved math equations.

From a young age, Adams said her grandfather, who is also an artist, inspired her to create — a hobby she still enjoys as often as she can. But lately, she said much of her time has focused on mathematics.

Adams recently spent two months at the University of Washington Bothell with 12 other students as part of the Research Experience for Undergraduates program, funded by the National Science Foundation.

“We were working on titling theory, which is a pure math topic that is very visual,” she said. “We worked on some open problems over the summer and were actually able to answer three questions that hadn’t been solved before.”

Jadie Adams, a senior math major at Westminster College, is also an artist — a hobby she said influences the way she sees her field of study.  This piece is a pencil drawing she created in 2015. (Photo courtesy Jadie Adams)

Adams and her team are currently trying to get their research published in a professional math journal. But in the meantime, she has presented her work across the nation, from Westminster’s Geekfest to the Society for Advancement of Chicanos/Hispanics and Native Americans in Science conference, which emphasizes diversity in the science, technology, engineering and mathematics (STEM) fields. Over the holiday break, Adams presented her findings at a joint math conference in San Diego, California.

“I’ve loved advising Jadie,” said Janine Wittwer, Westminster mathematics professor and Adams’ advisor. “She loves math, physics and computer science, and I think the hardest challenge for her is that she can’t take all the courses the college has to offer in those fields.”

The Forum sat down with Adams to talk about her experience in STEM research, how her creative mindset helps solve math problems and what it’s like to work and succeed in a male-dominated field. This interview has been lightly edited for clarity and conciseness.

Q: What was it like trying to answer math problems that have never been solved before?

A: We did not set out to solve any problems specifically. We were just kind of looking at all of the open questions and seeing what we felt like we could solve, so there were a lot of dead ends. Once we kind of got one going, another proof kind of fell out of that, so we answered two questions. For the last one, there were half a billion cases we had to check, so we ended up writing a computer code to check those for us and got to run it on a cluster of 96 computer processing units in Washington that ran for one week and solved the problems for us.

Q: Are you able to incorporate your math and art skills together?

A: I find that my brain picks up on patterns — that’s why I think I like things like math and science. When I am drawing, there have been times when I was drawing, like, knots and I realize that if you cross over this many times, you’ll have this many loops. Most people think math and art are pretty disjointed, but there is a lot of crossover. Pure math is very different from economics. I think that is a different side of the brain than art, but pure math involves very creative and problem solving skills. I feel like it is similar to art. It came in handy with the titling theory, because we had to build those images of the titling in Adobe Illustrator.

Q: How have your professors responded to the creative way you solve problems?

A: I have often found that I kind of find weird ways of proving things. Like, everyone in the class proved it one way and I proved it another way. I think the creativity helps you see different ways of doing things. Usually professors’ reactions are kind of skeptical and then once they check it, it is like, ‘Oh okay. I guess that does work.’ Often the way I do it is not as pretty. I think it’s a creative process. With proofs, you are taking things you know to prove or disprove something else. But the way you put things together and build it is very creative.

Q: Do math, physics and computer science continue to be male-dominated fields?

A: I think math does a good job of keeping things balanced and physics is fairly balanced, but the computer science [field] is very unbalanced. There are not many female computer science majors at all. The research program I was in was about half and half. Computer science has a hard time because they don’t even have the interest level from women to try to balance things out. It is more a problem of like, ‘I did not think computer science was a possibility for me or something I might end up doing.’ I had to take a computer science class or else I don’t think I ever would have touched it, so I think the issue is women don’t really think of that when they are thinking of possible careers.

Q: What has it been like for you to be successful in that environment?

A: I have actually been able to go to some computer science conferences that are just for women. I went to one in Salt Lake and one in Florida and those are really cool because it is just women from all over the world who are into computer science and are there to support each other and it’s neat. I imagine it is different in the workplace, but at Westminster it has been really good. There are female professors in all of those departments, but I imagine it is different at a job.

I think there have been a lot of things people have started doing recently. Helen Hu, a computer science professor, is really supportive and is the reason why I went to most of those conferences. Westminster does things trying to encourage diversity in STEM, so I think people are more aware of the issue and that it will change in the upcoming years. 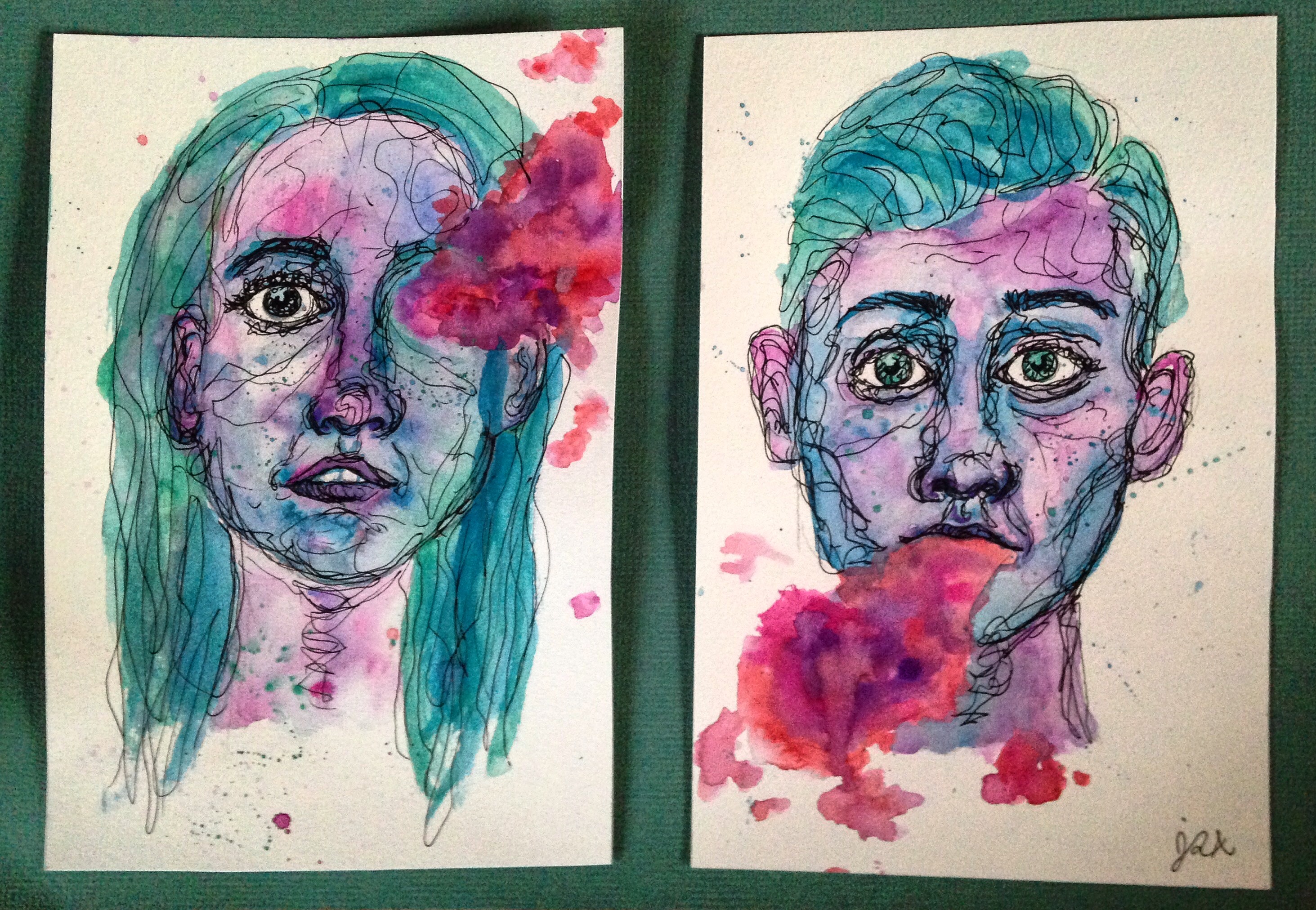 Jadie Adams, a senior math major at Westminster College, is also an artist — a hobby she said influences the way she sees her field of study. This piece is a watercolor and ink painting she created in June 2017. (Photo courtesy Jadie Adams)