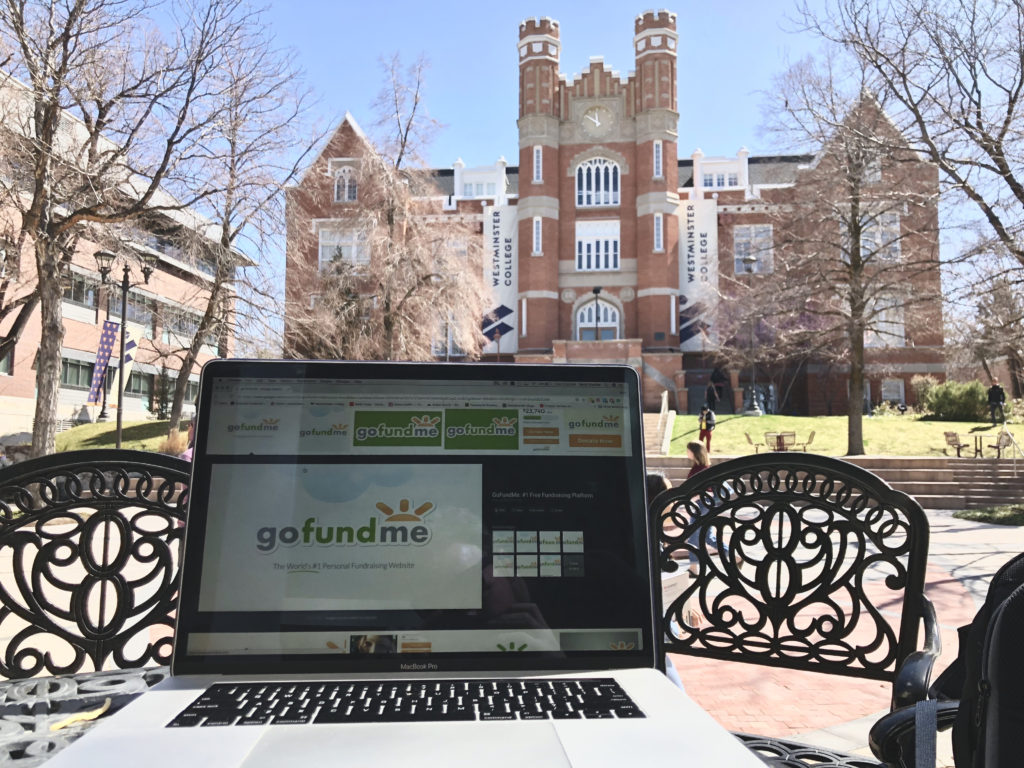 GoFundMe is an online site where people and organizations can turn to fundraise for all kinds of causes. The site has been used by many students and organizations at
Westminster College and has helped fund projects ranging from humanitarian trips to personal passions. (Photo by Berin Klawiter)

When she was nominated to participate in Mx. Westminster, an annual pageant at Westminster College that donates proceeds to the Rape Recovery Center of Utah, Kelsey Henrichsen created a GoFundMe page to help raise money.

Henrichsen, a junior computer science major, was one of 12 participants and she raised $275 for the cause through online donations.

“I think it was successful because I was able to post it on Facebook and people were able to share it,” Henrichsen said. “People I’ve never even met were donating.”

GoFundMe is an online site where people and organizations can turn to fundraise for all kinds of causes. The pages are set up online, oftentimes with a photo and description of the project. Donors can select the amount they wish to contribute and enter their payment information in one step.

To raise money for the Rape Recovery Center, Henrichsen said she initially tried to go from person to person but eventually found more success online.

“A lot of people don’t carry cash anymore,” she said. “When I had the GoFundMe set up, they could just pull up their credit card and add it on. They were more willing to donate that way than with cash.”

Other members of the Westminster community have also found success through this medium. They will often share links to their fundraiser on social media, which many said allows family and friends to be aware of their causes.

“I think that there is a huge advantage in that it’s so grassroots because you can make a donation so easily by pushing a button,” said Janell Weinstock, an adjunct professor who teaches a non-profit management class.

Bryn LeBaron, a junior marketing and management major, said she’s been setting up GoFundMe pages since high school and some of her more successful campaigns were for humanitarian trips to Thailand and Guatemala.

“We were raising money to fund projects and money for supplies to take over there,” LeBaron said. “The pages were more geared towards our specific groups.”

Kaytlynn Scott, a junior philosophy major, set up a GoFundMe page to raise money for the Westminster College Ethics Bowl’s national competition in Chicago and she said the team received donations mostly from their personal connections.

“All of our team and families [were donating],” she said. “There were a lot of professors from the school that donated, as well.”

LeBaron also said the majority of the money she received on GoFundMe was from her circle.

“There were a couple people that I reached out to and did not expect to get a donation [from],” she said. “I reached out to my teacher from kindergarten and she actually donated quite a bit of money towards one of my humanitarian trips.”

‘Where do you draw the line?’

People create GoFundMe pages for a variety of reasons — some for causes that are widely considered as deserving and others some would consider as inappropriate.

“I think that it is appropriate to set up GoFundMe pages when it is for medical reasons or to support nonprofits,” said Kate Howard, an elementary education major. “I have donated to a friend with leukemia and also to a different friend for funeral expenses.”

Jamie Crane-Mauzy, a communication major, set up a GoFundMe page at the beginning of her professional skiing career to fund her travel to different ski events worldwide because she didn’t have a sponsor at the time.

“I think that it was successful because it was a passion that I was pursuing,” said Crane-Mauzy. But she said not all fundraising campaigns may be considered appropriate or deserving of contributions.

“It is inappropriate when you are stating things that aren’t 100 percent true,” she said.

GoFundMe states that it is the world’s No. 1 place to raise money for tuition and college costs, and some students at Westminster College have used the site for that purpose, with mixed reviews from their peers.

“College education in this country is not as accessible financially as it should be,” said Jessica Rubin, a senior arts administration major. “Where do you draw the line? Because not every student in the entire county can get their college education through GoFundMe.”

Rubin also noted that GoFundMe isn’t a site she often visits or gets pulled into from social media links.

A new dimension to fundraising

Though GoFundMe pages can be helpful for projects that require smaller, one-time donations, bigger organizations may not see as much success.

“Large non-profits like the American Cancer Society have to raise so much money that GoFundMe would be a very small portion,” Weinstock said. “But for a Parent-Teacher Association, they might be able to get a whole playground worth of equipment by doing a GoFundMe.”

For example, the organization retains the right not to allow or to shut down certain fundraising campaigns that violate its conditions. Some violations include campaigns that infringe on laws or governmental regulations; are fraudulent or misleading; exploit human trafficking; and fund illegal drugs or alleged crimes associated with hate, violence, harassment, discrimination and terrorism.

Though GoFundMe provides a new method for those who work within its terms and conditions to raise money, Weinstock said it’s not the only way to get people to donate to a cause.

“Fundraising in the nonprofit world is a highly professional skill and people that are fundraisers have all sorts of tools in their tool bucket,” she said. “To keep donors giving on a regular basis, you have to build close relationships with the donors. They have to feel like they are attached to your organization and believe in the mission [of the organization]. GoFundMe is just a new tool, but there are many other tried and true ways of having people donate.”