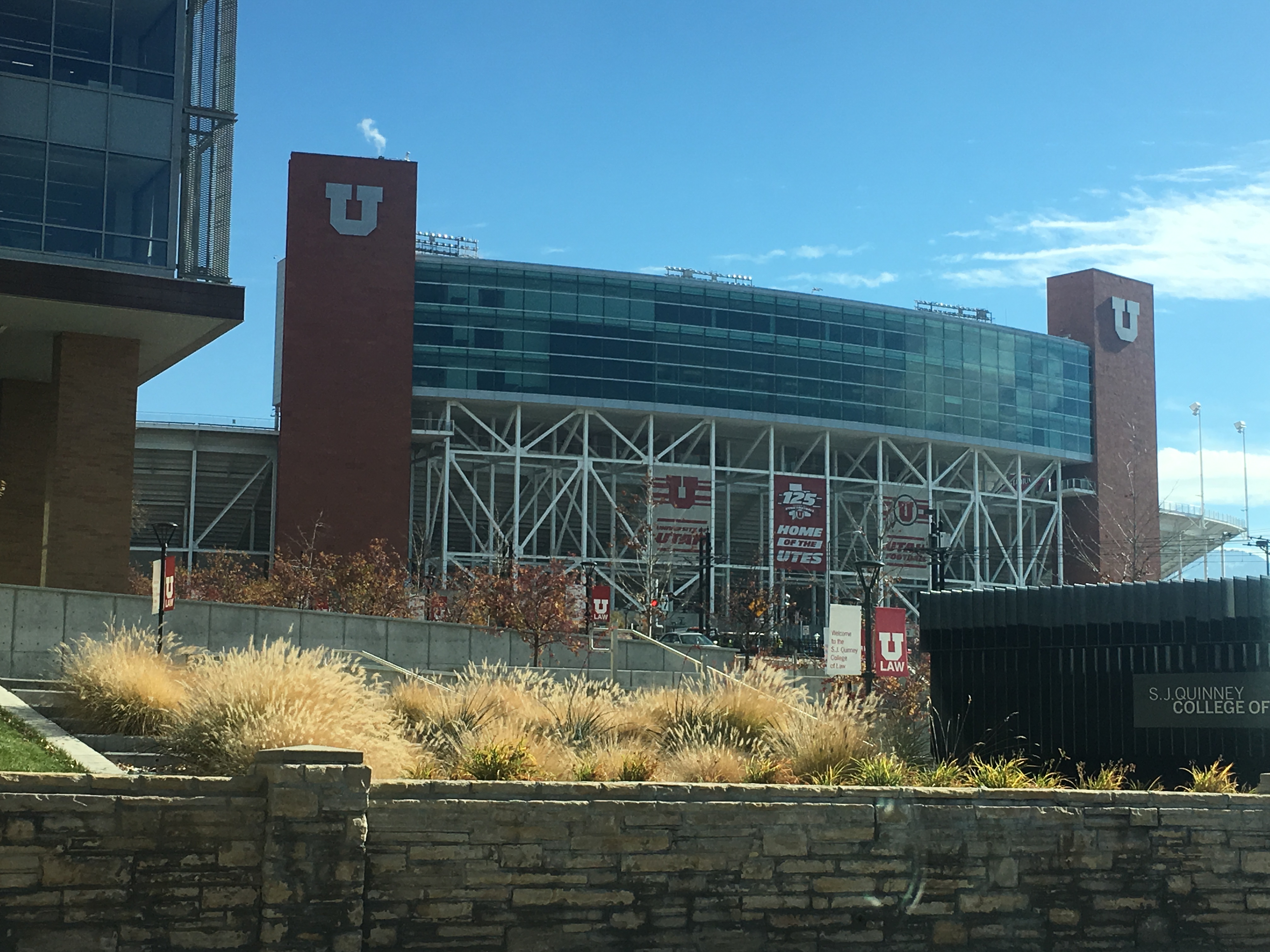 University of Utah student Lauren McCluskey was shot and killed on campus On Oct. 22. She was found after police responded to a report of a possible abduction around 8:00 p.m.

Students at the university received a notification of a suspected shooter at 9:57 p.m. on Oct. 22 through the University of Utah’s Campus Alert System. The message included a physical description of the suspect and promised that more information was to come.

Many universities and colleges, including Westminster College, have similar emergency notification systems that send out mass messages through text, email and social media to alert people of an emergency as quickly as possible.

Shootings at the University of Utah

Within the span of one year, the University of Utah has had two unrelated campus shootings.

On Oct. 30, 2017, campus was put on immediate lockdown after 24-year-old Austin J. Boutain, described as a white male with a teardrop tattoo on his face, was seen fleeing into neighborhoods on Foothill after a carjacking and fatal shooting.

The next morning, university authorities identified the victim of the shooting as 23-year-old, international student ChenWei Guo.

In 2018, the University of Utah suffered the loss of another student at the hands of an active campus shooter. Lauren McCluskey, a senior communication major and member of the track team, was shot and killed by her ex-boyfriend Melvin Shawn Rowland.

Shootings have not only occurred on college campuses but across the country, causing concern for some students.

“I don’t understand why some second amendment supporters belittle our concerns with shootings,” Mary Sanchez, a pre-physical therapy major student said, with concerns of the recent shootings across the nation. “I feel like no matter what belief system you have, you should see that we have a serious issue with gun violence and that we need to address it somehow.”

The most recent shooting took place in Thousand Oaks, California on Nov. 8, where at least 12 people were killed when the shooter opened fire in a bar and grill. The shooter, 28-year-old former Marine Ian David Long, set off smoke bombs in the building causing panic. He shot a security guard at the entrance and then opened fire into the crowd, according to CBS.

The shooting in California happened a little over one week after a mass shooting inside a Pittsburgh synagogue. On Oct. 27, an armed assailant opened fire within the Tree of Life Synagogue, killing at least 11 congregants and wounding four police officers, according to the New York Times. 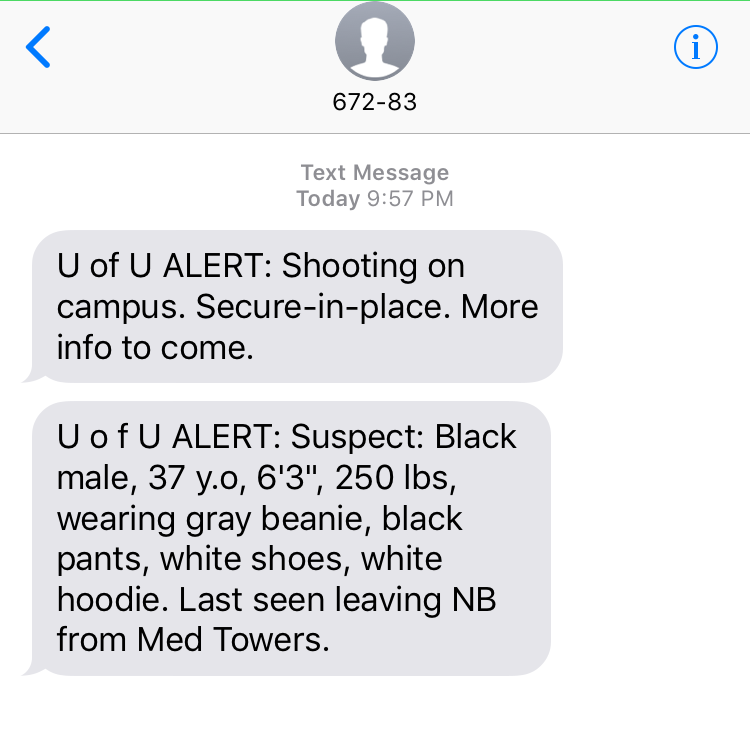 Regarding the numerous recent shootings across the country, Mary Sanchez, a pre-physical therapy major said, as a woman, it helps to have the Emergency Notification System (ENS) but that it also doesn’t make her feel completely safe.

“It helps but at the state we are in now, I don’t think a lot of things make me feel safe,” Sanchez said. “Even when it comes to day to day things like walking home alone at night.”

Though University of Utah students were alerted to the university’s most recent shooting, Westminster College students did not receive notifications about the shooting or of the suspected shooter.

President Beth Dobkin of Westminster College said in an email sent to all faculty, staff and students after the shooting that college authorities had deemed such a message unnecessary.

“We determined that sending a message through our Emergency Notification System (ENS) was unnecessary for a variety of reasons, including our responsibility as an institution to avoid creating undue panic and alarm when there is no immediate threat to campus,” said Dobkin in a campus-wide email on Oct. 23.

In the email, President Dobkin said she wanted to express her deepest condolences to friends and colleagues at the University of Utah for the loss of their student. The email also listed resources such as Counseling Center services for community members looking for support.

The ASW Student Board also sent an email to campus on Nov. 1 addressing the lack of communication from the campus’ notification team.

The ASW email said members of the Westminster community who wanted more information in the future could opting-in to the University of Utah’s Alert System as well as update their contact information for Westminster’s ENS.

As director of campus safety, Bri Buckley is responsible for communicating information that could protect the Westminster community during emergencies including extreme weather or an active shooter situation.

Buckley agreed with President Dobkin’s email and said that the ENS was not needed for the recent shooting at the University of Utah because there was no immediate threat to the Westminster community.

“I found out about the shooting from Facebook before I received anything from Westminster’s administration,” Duncan said. “I understand that they were trying to avoid ‘mass-panic,’ but it’s a bit insulting that they believe the students of Westminster are so naive, to be hysteric about news in our community.”

“If a kidnapping and shooting within three miles of our school doesn’t constitute a potential emergency for Westminster students, I don’t know what does,” Duncan said.

Duncan said she wants Westminster’s administration to change how it “constitutes an emergency for its students.”

“If it doesn’t directly affect me personally, I would like to be in the know, so I may also check on my friends and colleagues at the [University of Utah] to make sure they are okay,” Duncan said.

In the aftermath of the shooting, student Mary Sanchez said she has felt support from students, faculty and staff.

“I feel like it has been very supportive, multiple faculty and departments have reached out to us, offering counseling,” Sanchez said. “I think Westminster addressed [the shooting] as best as they could.”

Westminster College uses Regroup as its ENS. The Regroup service is used to transmit brief urgent messages to a large segment of an institution’s population as quickly as possible, disseminating messages via email, voicemail, and text messages.

Students, faculty and staff will automatically be signed up for this service, according to Westminster’s website and information can be updated via self-service, the college’s online system for managing things such as registration and financial aid.

“We do rely on everyone enrolled through self-service, to update their information,” Von said.

This system is a means to reach out to as many people as possible who are within the Westminster community, for a variety of potential emergencies such as active shooters within the surrounding neighborhoods or on campus, for extreme weather conditions and other potential threats, Buckley said.

“I think this system is really useful considering there is no alternative,” said student Maribel Duncan. “It helps students remain informed for matters that potentially affect their safety and well-being.”

If ever there was a problem or emergency at Westminster, the college has emergency communication tools such as sirens, emergency response personnel, Building Guardians, online information and news media, according to the college’s website.

“Building guardians” are individuals who are responsible for communicating urgent messages and securing the buildings in the event of a power outage and/or emergency, including residential halls. Sirens will play over a loudspeaker so as to broadcast an alarm across campus.

Von said that those who are on social media platforms, such as Twitter, can stay up to date with emergency situations through text threads and re-tweets.

“Twitter is the most effective platform to get information out fast, in an emergency situation,” Von said.

“U Heads Up!” a University of Utah mobile app for safety, response and emergency notifications

*Adrianna Quarry is the sister of The Forum reporter Mackenzie Quarry.