Members of the Westminster College community paint in the Special Events Room in the Health, Wellness and Athletic Center at Westminster College as part of an ASW mixer on Feb. 23. The Bob Ross–style paint along was led by Meera Edwards, a senior painting student. (Photo by Meghan Garrecht-Connelly)

Hunched over their canvases, around 45 members of the Westminster College community intently followed student Meera Edwards’ directions for wet-on-wet painting technique on Feb. 23.

They’d gathered in the Health Wellness and Athletic Center’s Special Events Room to paint Sugar House Park Bob Ross–style. Ross is known for his step-by-step painting tutorials, which were popularized on the 11-year run of his PBS television show, “Joy of Painting,” in the 80s and early 90s.

On screen, he produced landscape masterpieces in just 30 minutes, inspiring his audience to do the same with encouraging words, like, “This is your world — your creation.”

“There is something kind of fun watching Bob Ross paint and about seeing a Bob Ross painting, even though you recognize that it’s not serious art,” said David Baddley, an art and photography professor. “He used painting styles that were really fast, that had been used in mass production, but had never really been used in serious art.”

Though Baddley said Ross may not be viewed as a master painter, he imagines the artist won’t be forgotten.

“I think Bob Ross’ legacy and popularity is probably letting people have a fun time and showing them something they can easily do,” he said.

For some, Ross’ popularity extends beyond his paintings to his persona and encouragement of individual creativity. 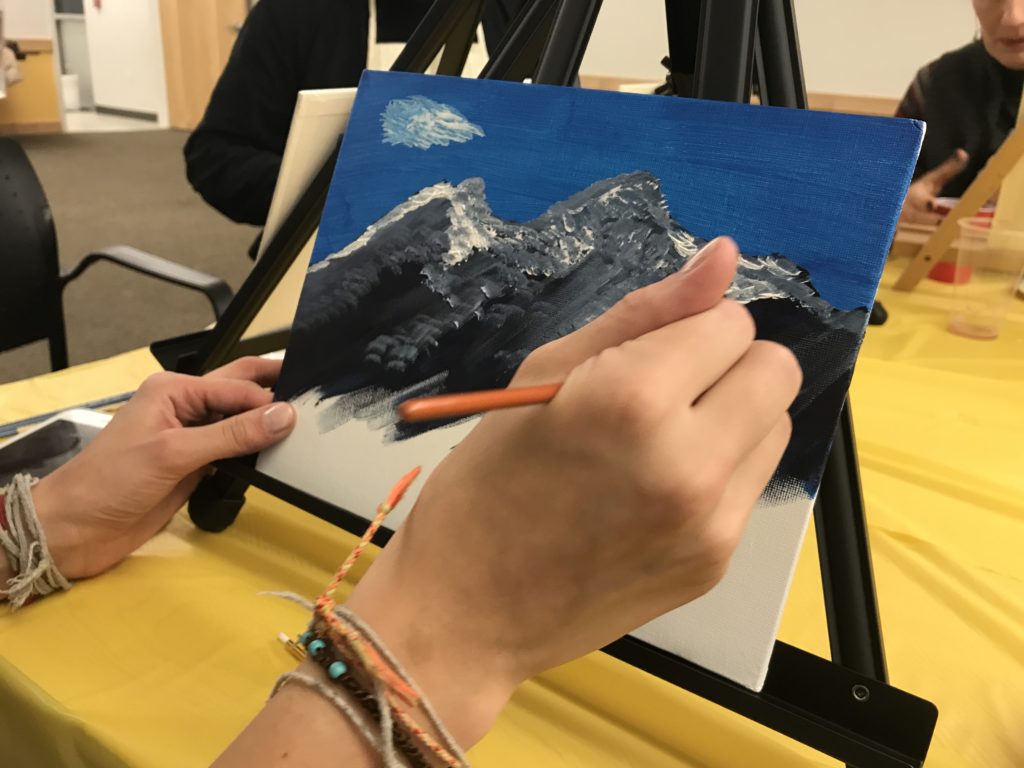 Grace Gorham, a student at Westminster College, starts to paint Sugar House Park during an ASW-sponsored Bob Ross–style paint mixer on Feb. 23 at Westminster College. Though some art professors say Ross won’t be remembered as “serious art,” the painter has developed a following among young millennials who appreciates his work and his demeanor. (Photo by Meghan Garrecht-Connelly)

“Some people have a certain power with their voices, and I think he has that [power],” said Edwards, a senior painting student who led the class. “There is a way that he speaks that captures people’s attention and makes you feel like you can [paint] even if you’ve never painted in your life. You feel like you have the power.”

Ross’s fans also continue to be mesmerized by his casual dress — unbuttoned chambray shirts and jeans — and his afro, which he originally permed in order to save money on haircuts, according to an article in Mental Floss, an online encyclopedia of interesting facts.

Ross’ face can be found on a wide range of products: from T-shirts, socks, lunch boxes and pants to bobble heads and chia pets with afros.

“For decades, I’ve been seeing Bob Ross T-shirts and Bob Ross references and things like that, so I’m not sure if it’s really anything new,” Baddley said. “But it’s still kind of fun to see around.”

Ross radiates positivity in his online tutorials, sprinkling his instruction with phrases like “happy little trees” or referring to an element of his painting that’s giving him trouble as “that little son of a gun.” His “Joy of Painting” shows are also full of encouraging words like, “You can do it,” “The secret to doing anything is believing you can do it” and “I really believe that if you practice enough you could paint the ‘Mona Lisa’ with a two-inch brush.”

“Bob Ross, I think, has always been considered tacky because kitsch is tacky and I think Bob Ross definitely falls into the category of kitsch,” Baddley said. “Kitsch essentially is iconography that is based on the idealism of life. Think of it as corny little knick knacks.”

Whether Bob Ross’ legacy ends up being in the world of art or kitsch, many find his reassuring words worth remembering: “We don’t make mistakes; we just have happy accidents.”