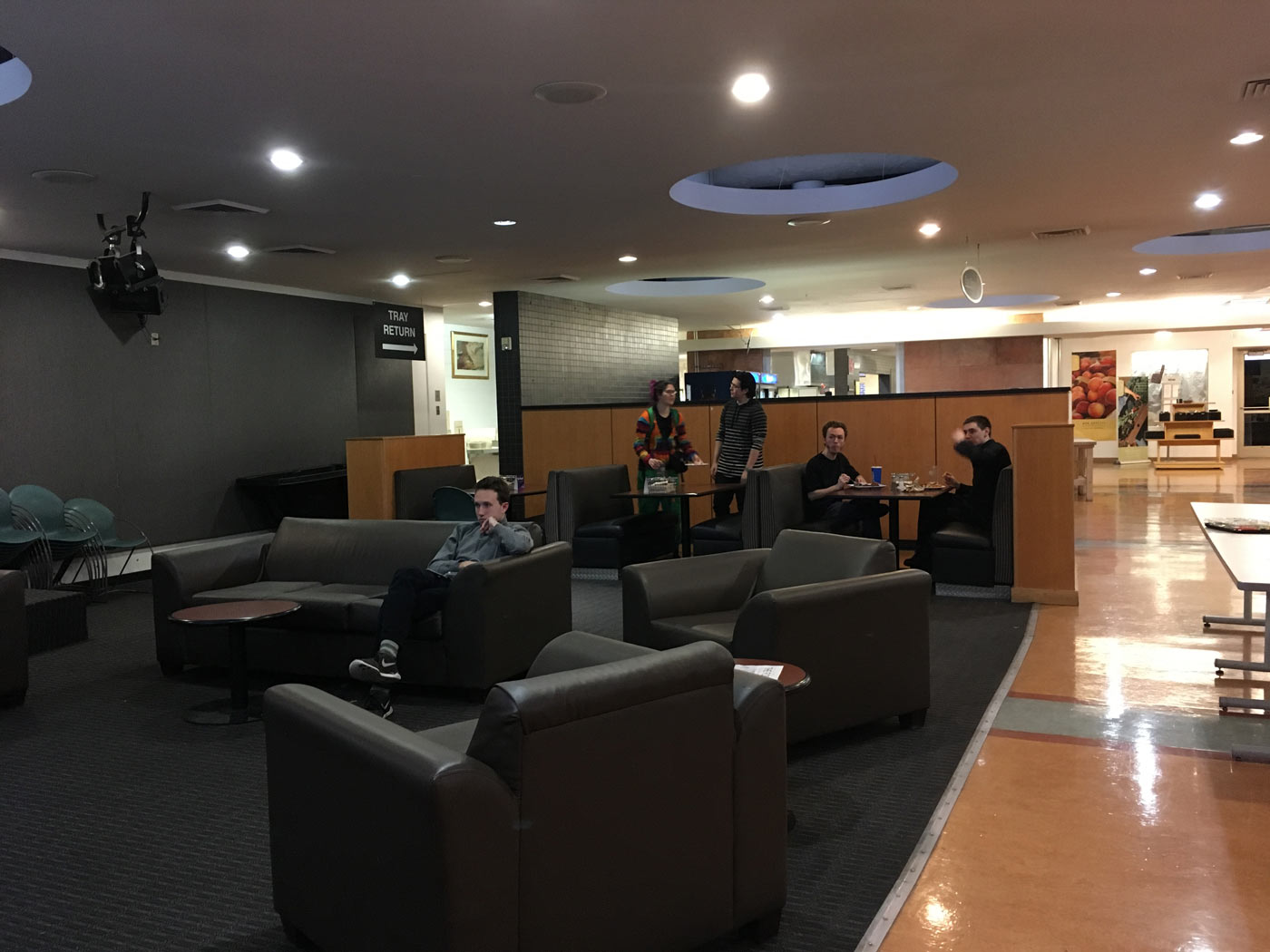 Three Westminster students and two Bon Appétit employees on break watch Super Bowl LII in the Shaw Student Center on Feb. 4. Although kickoff was scheduled for 4:30 p.m., most students who attended the ASW Events Super Bowl tailgate party didn’t stay to watch the game, and the Shaw Student Lounge was mostly empty by 3:45 p.m. (Photo by Stephanie Held)

It’s well known among campus leadership that students at Westminster College have an attendance problem. Though most make it to class, they are notably absent from college events, like game days.

Getting students to attend pre-game tailgates with free food seems to be easier, but getting them to stay for the actual game can be a challenge. Holding with this tradition, ASW Events’ Super Bowl tailgate on Sunday was no different. Students came for the free Buffalo Wild Wings — but left long before the game began.

Kickoff was scheduled for 4:30 p.m., but the Shaw Student Lounge was mostly empty by 3:45 p.m. When the game began, only three students and two Bon Appétit employees on break were watching.

Grace Gorham, the director of ASW Events, said she and her team are used to low student engagement.

“That’s why we always have free food at our events,” said Gorham, a junior elementary education and special education major. “It’s because that’s how you get people to come and then hopefully they stay.”

Unfortunately, many students who came to the Super Bowl tailgate had no plans to stay. A group of juniors and seniors leaving the event said the “real party” was off campus. They said they came for the free wings and pizza but were going to watch the game somewhere with alcohol. 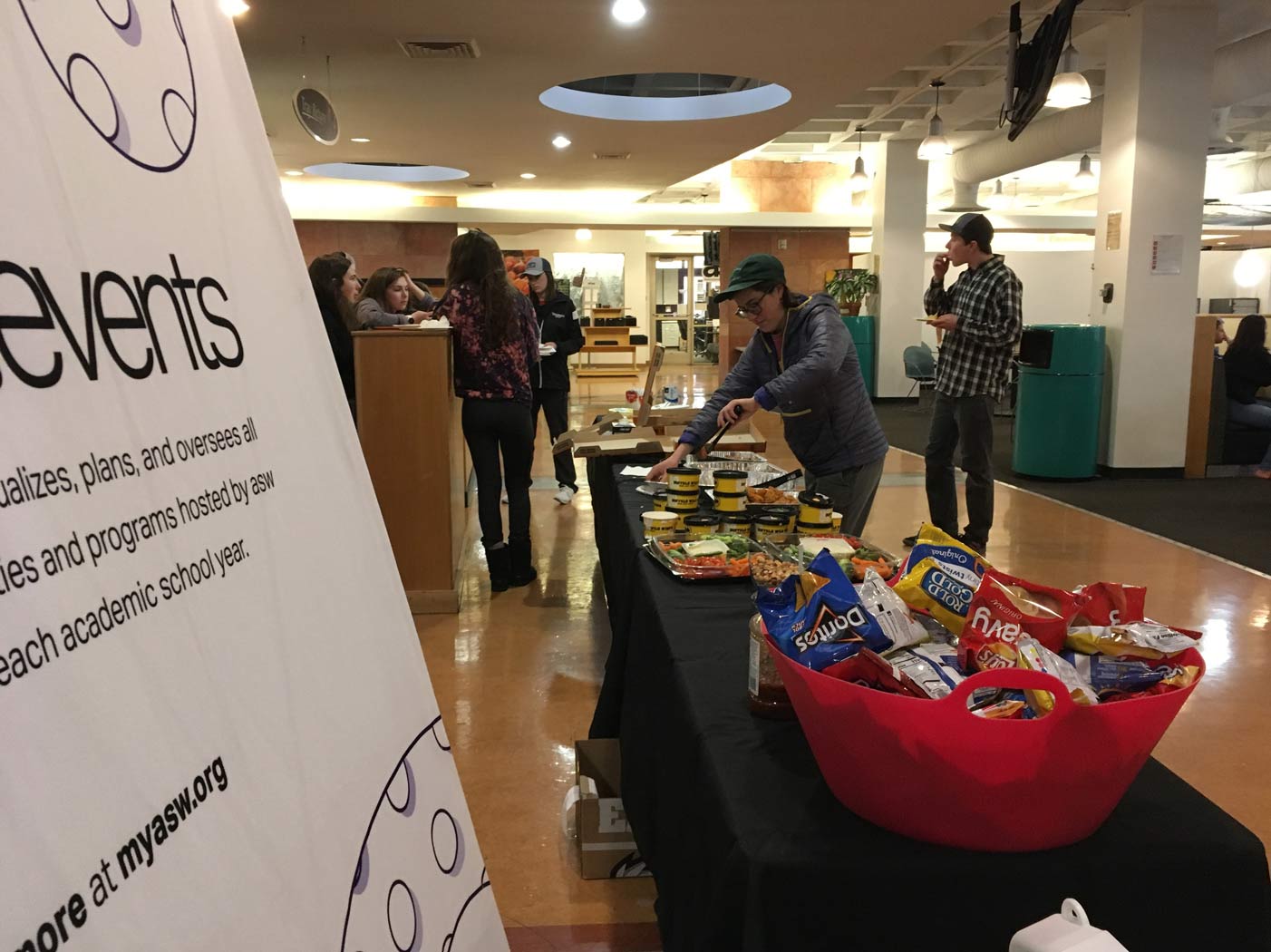 Students gather to eat free food at ASW Events’ Super Bowl tailgate event in the Shaw Student Center on Feb. 4. The tailgate began at 3:00 p.m., but most students came for the free Buffalo Wild Wings and left long before the game actually began. (Photo by Stephanie Held)

Natalie Saavedra, a senior cognitive psychology major, said she’s never been to a Westminster sporting event and came to the Super Bowl tailgate only because a friend organized it.

“I personally have never gone to a game here on campus because usually they interfere with either my work or my classes or my club meetings,” Saavedra said.

She said she didn’t know if she cared to stay to watch the Super Bowl because she wasn’t rooting for either the Philadelphia Eagles or the New England Patriots.

“I always watch for the commercials more than the game because I really don’t care about football or sports in general,” Saavedra said.

Hannah Freudenberger, a first-year computer science major and business management minor, said she stumbled across the tailgate on her way to buy dinner. However, she said she had no plans to stay.

Despite the eroding attendance, ASW Events President Cassandra Yerkes remained optimistic about the turn out.

“This is easily better than, if not way better than, all turnouts for tailgates,” said Yerkes, a senior arts administration major and fine arts minor.