Westminster College has often been recognized for its institutional focus on environmental stewardship during the past several years. 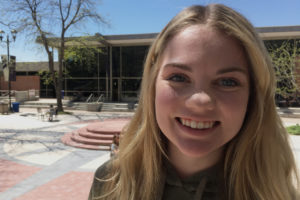 Kenadee Morrell, a sophomore sociology and psychology double major, poses for a photo in the Richer Commons at Westminster College on April 25. Morrell encourages her peers to recycle, which she said is a simple but important way to make a positive impact on the planet. (Photo by Stephanie Held)

Last year, the college ranked 159 out of 227 on the Sierra Club’s Cool Schools list and was on the Princeton Review’s annual list of Green Colleges. Westminster also has a silver rating from the Sustainability Tracking, Assessment and Rating System (STARS), a self-reporting framework for institutions to measure their sustainability efforts.

Despite these accolades, there is still “room for improvement” for the college and its community, said Kerry Case, the director of the Environmental Center.

“There is no one who has zero impact on the planet’s resources,” she said. “So setting your own personal goals and thresholds becomes really important.” 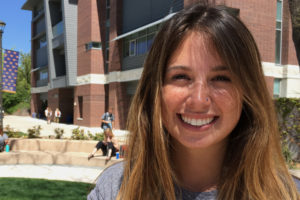 Marissa Trevino, a sophomore psychology major, poses for a photo in the Richer Commons at Westminster College on April 25. Trevino said students should be aware of how they spend their money and shouldn’t financially support companies that aren’t conscious of their environmental impact. (Photo by Stephanie Held)

The success of recent sustainability-focused events, like the 12th annual Earth Day celebration and the Environmental Center’s #WasteFreeWestminster series, may indicate student interest in environmental sustainability.

Case said this curiosity is promising because community support is beneficial when someone is trying to make lifestyle changes.

“Having a buddy — just like a workout buddy, someone who you tell your goals to, who can hold you accountable, who you can hold accountable […] — helps a lot,” Case said.

The Forum asked students to share their ideas for ways to live more sustainably. Below are six recommendations they gave to their peers. 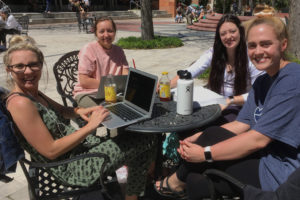 Junior nursing majors Taylor Wright, Katie Rees, Anika Van Boerum and Allison Roth sit in the sun in the Richer Commons at Westminster College on April 25. As the end of the semester approaches, the students said they encourage their peers to recycle old papers rather than throwing them away. (Photo by Stephanie Held)

By the end of the semester, many students have accumulated old assignments, syllabi and event flyers.

Instead of throwing away or burning these piles of paper, junior nursing majors Taylor Wright, Katie Rees, Anika Van Boerum and Allison Roth suggested recycling them.

The group said they thought the advice was particularly appropriate as their peers prepare for summer by cleaning out their bags and study areas.

Kenadee Morrell, a sophomore sociology and psychology double major, also encouraged others to recycle, noting it’s a simple way to make an impact.

“The little things are going to build up and become a bigger thing,” Morrell said. “If you focus on the little things, then maybe it’s not as overwhelming — [and] I feel like you actually get more progress at the end of the day.”

Decreasing overall waste on campus was also a main focus of the Environmental Center this year, according to Case, since Westminster sent significantly more garbage to the landfill last year than it did the year before.

“Something has gone wrong,” she told The Forum.

The Guardian estimates that people around the world buy 1 million plastic water bottles per minute. And research published in Science Advances, a peer-reviewed scientific journal, found that only 9 percent of all plastic (8.3 billion metric tons as of 2015) is recycled. 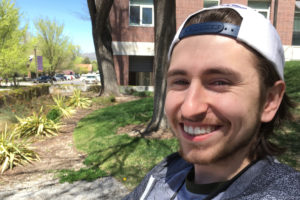 Trevor Villalobos, a sophomore political science major, poses for a photo in Richer Commons on April 25. Villalobos suggested that community members use reusable water bottles instead of plastic ones for environmental as well as personal health reasons. (Photo by Stephanie Held)

Many of these water bottles also contain particles of plastic that are then swallowed by consumers, according to a report from Orb Media. In the study, 93 percent of bottled water tested showed signs of microplastic contamination.

Several students suggested that community members use reusable water bottles instead of plastic ones for environmental as well as personal health reasons.

“In general, plastic is not healthy for the environment,” said Trevor Villalobos, a sophomore political science major. “It’s not biodegradable and its not really beneficial to be having it go in our bodies either.”

3) Bring your own coffee mug

Junior finance major David Linares-Plata advised other students to bring their own mugs or thermoses to coffee shops in order to cut back on paper and plastic waste. 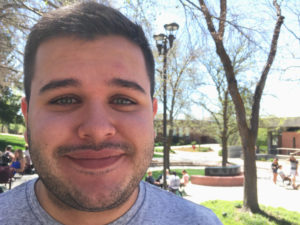 Junior finance major David Linares-Plata poses for a photo in the Richer Commons at Westminster College on April 25. Linares-Plata suggested fellow students bring their own coffee mugs or thermoses to campus to cut back on paper and plastic waste. (Photo by Stephanie Held)

“It’s cheaper to bring your own mug,” Linares-Plata said. “In Bassis, it’s 99 cents for a refill if you have your own [mug]. So, you use less paper and you can refill as many times as you want and save money.”

Anyone looking for a reusable cup can borrow one from the Environmental Center’s ugly mug collection, which is located near the order counter in the Bassis Student Center and is well stocked with zany mugs from the thrift store.

“It’s not that big of a deal, as each mug costs 50 cents to $1,” Horton said. “I think we’d much rather have people using the mugs, even if they don’t return them. Westminster’s waste level is up 66 percent this year, and a large portion of that increase is from Bon Appetit.”

In the United States alone, people use approximately 500 million plastic straws a day, according to National Geographic.

Plastic straws are an important contributor to the estimated 8 million tons of plastic that flows into the oceans every year. One study predicted that by 2050 there will be more plastic in the ocean than fish. 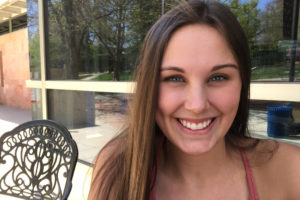 Sydney Oplinger, a junior nursing major, poses for a photo in the Richer Commons at Westminster College on April 25. Oplinger said she has stopped using plastic straws because of the negative impact they have on the oceans and recommends her fellow students do the same. (Photo by Stephanie Held)

Organizers of the Strawless in SLC campaign recently asked local bars and restaurants to stop handing out single-use plastic straws. They also encouraged citizens to sign a petition showing public support for the initiative.

Straws are especially dangerous pollutants because they are easily ingested by fish and other marine creatures. Footage of Texas A&M University biologists carefully removing a straw from a sea turtle’s nose has over 22.5 million views on YouTube.

Sydney Oplinger, a junior nursing major, said plastic straws were banned in the area of Mexico she visited for spring break.

“[Plastic straws] don’t decompose,” she said, noting that she’s stopped using them. “So [use] reusable straws or just don’t use a straw. [At a restaurant] if they give you a cup, just drink out of the cup.”

5) Wear clothes more than once before washing

To save water, junior accounting major Sam Steffensen suggested students wear their clothes more than once before washing them. 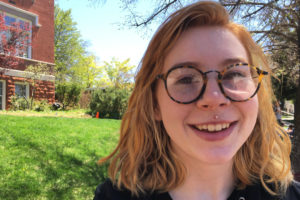 Sam Steffensen, a junior accounting major, poses for a photo in the Richer Commons at Westminster College on April 25. Steffensen suggests students wear their clothes more than once before washing them as a way to conserve water. (Photo by Stephanie Held)

“If you think about it, we don’t get very dirty walking around throughout the day,” Steffensen said. “I think we wash our clothes once a month. […] As long as you’re washing your underwear frequently enough, it’s not that bad.” 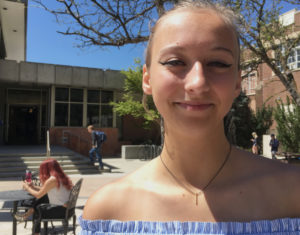 Emerson Fratzke, a first-year communication major, poses for a photo in the Richer Commons at Westminster College on April 25. Fratzke recommends that fellow Westminster students buy products from businesses that support environmentally friendly initiatives as a way to create a positive impact on the planet. (Photo by Stephanie Held)

Although it requires some research, first-year communication major Emerson Fratzke suggested her peers buy products from businesses trying to minimize their environmental impact.

“You can look up these companies and you can see all the efforts they’re putting into making it so we’re not cutting down our forests [or] putting plastic into the ocean,” Fratzke said.

Marissa Trevino, a sophomore psychology major, agreed and said students should be aware of how they spend their money and if it’s going to ‘green’ companies.

Case said a number of lists are available online but cautioned students to watch out for misinformation.

“You have to be really savvy because there’s a lot of ‘green washing’ out there,” she said. “There’s a lot of companies set up out there to trick you. […] So just buying something that says it’s all natural or environmentally friendly isn’t always the best option.”