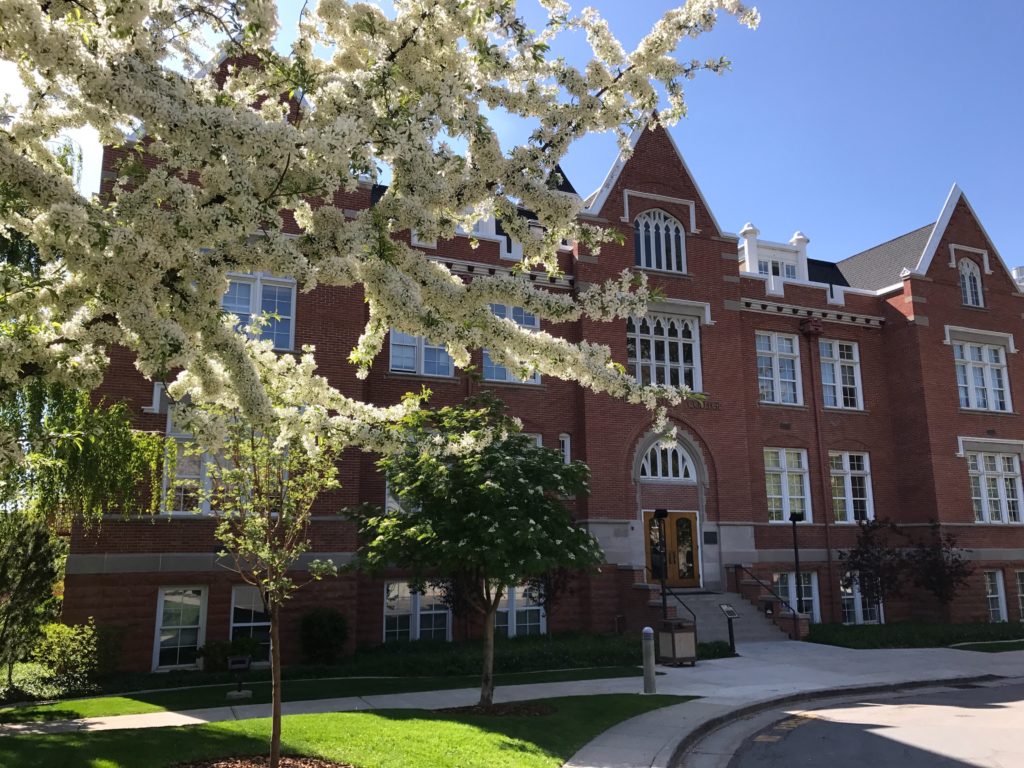 A tree blooms in front of Converse Hall at Westminster College on May 3. Among the many changes on campus next year, Honors College Dean Richard Badenhausen will serve as interim provost after Lisa Gentile’s departure at the end of the semester. (Photo by Jacqueline Williams)

Westminster College President Steve Morgan announced in an email sent to the student body on March 1 that Lisa Gentile, Westminster College’s first female provost, will be leaving the school after this semester.

“[Lisa] felt like it was a good time to move back east, closer to home and family, and explore other higher education and business interests,” said Morgan in an email to The Forum. “She has loved her time in Utah and at Westminster but felt like it was time for a change.”

Gentile was Westminster’s first female provost and Morgan’s first appointee in 2015. She did not respond to multiple requests for comment from The Forum.

After Gentile announced her resignation, Morgan said he consulted with President-Elect Beth Dobkin, the cabinet and deans and appointed Dr. Richard Badenhausen as the interim provost until the college appoints an official provost, whose anticipated start date would be July 2019.

“My job is to continue the momentum established under Dr. Gentile’s outstanding leadership and serve as a resource to President-Elect Dobkin when she joins our community on July 1,” said Badenhausen in an email to The Forum. “I’m excited about working with Dr. Dobkin and introducing her to the many wonderful aspects of life at Westminster College that I have come to love during the past seventeen years at this special institution.”

Badenhausen, the dean of the Honors College, has been working at Westminster since 2001 and is also president-elect of the National Collegiate Honors Council. While serving as interim provost, Badenhausen will continue to serve as the Honors College dean, and Westminster will provide him with resources to help with his added responsibilities, Morgan said.

Badenhausen said Morgan sent an email to faculty and staff on April 25 stating that the ultimate goal of the search process for a new provost will be to identify three to four outstanding finalists who are a great fit for Westminster’s community and campus culture. The final selection of a new provost will be up to Dobkin.

Morgan and Dobkin have been in the process of forming a committee and asking faculty and staff to nominate candidates to serve on it — similar to the way the Presidential Search Committee was chosen after Morgan announced his retirement. Badenhausen said he has been asked to chair the search.

“Westminster will miss Lisa,” Morgan said. “She led the development of the WCore and the strengthening of many of our academic programs. She oversaw a number of important accreditation reviews and pushed for more transparency in decision-making with faculty. For the last eighteen months, she has led the enrollment steering committee, a cross functional team of institutional leaders and departments that have developed a strategic enrollment plan and new affordability model for students. The new Griffin grant is a product of this group. She also has been a supportive leader in our efforts to become a more diverse and inclusive campus.”

For these reasons, Morgan said in his email to students and faculty, Gentile leaves Westminster better than she found it.