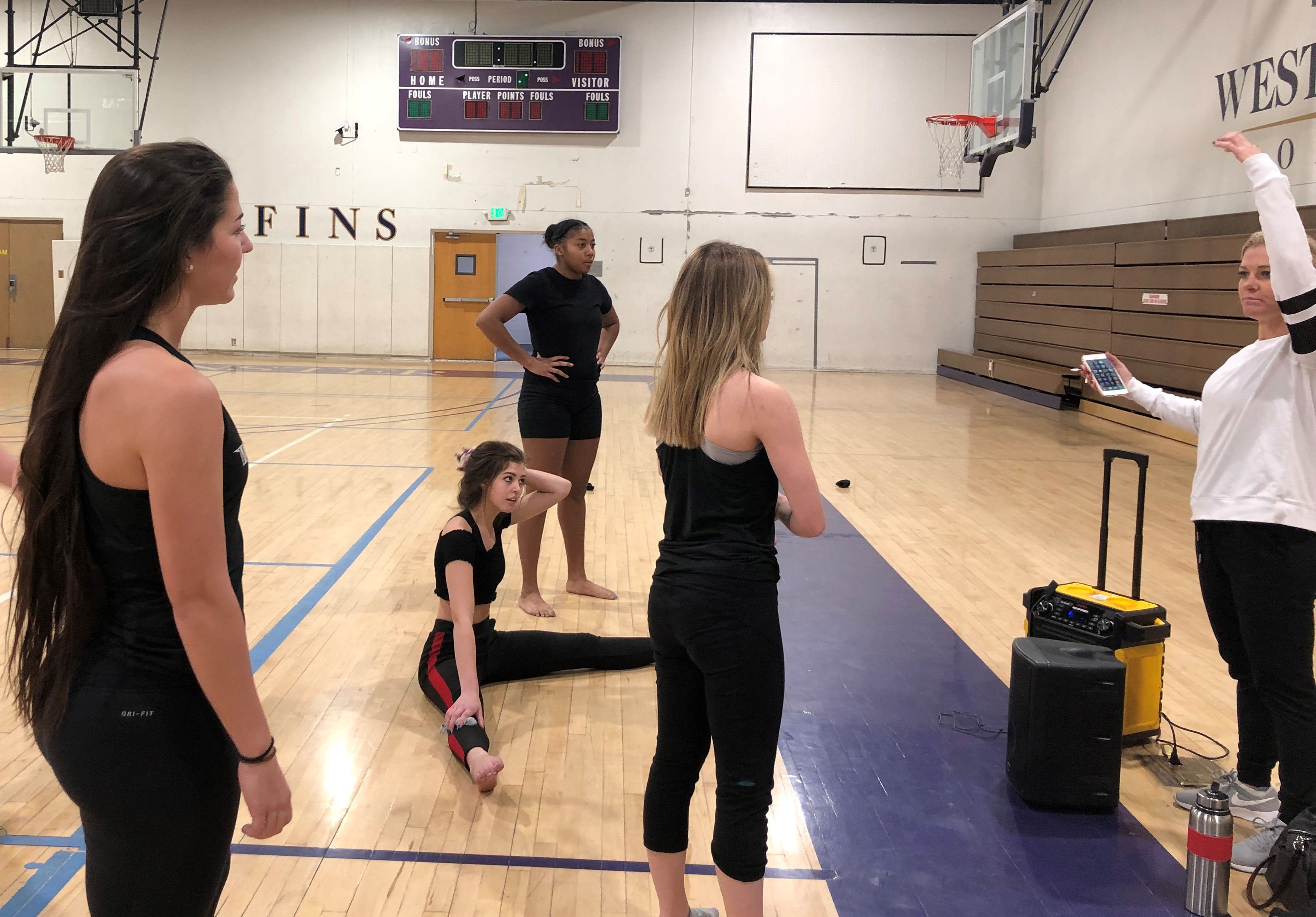 Westminster College’s spirit team gathers for feedback from their coach on Dec. 6 in Payne Gymnasium. Todd said she has been dancing with the spirit team for three years, and the team is currently practicing for home games, performances and their upcoming competition. (Photo by Oakley Matthews)

Maddy Todd — a junior public health major, dancer on Westminster College’s spirit dance team, pediatric assistant, president of the public health club, and new puppy owner — lives a pretty hectic lifestyle. Despite balancing going to school full-time and managing all of the other things life throws at her, she said she doesn’t let it stop her from reaching her dreams.

Todd said she has always dreamed of being a pediatrician since she was a tiny dancer at Colette’s Dancing School and American Dance Academy. Growing up dancing, Todd gained skills that she said would eventually lead her into the current roles she has in her everyday life on and off of campus.

“Maddy has demonstrated a high level of leadership and competency in the skills and knowledge of her degree,” said John Contreras, director of the public health program at Westminster. “She is a goal-oriented problem solver without being overly aggressive or self-centered and her sense of dedication inspires her club officers, students and faculty to excel.”

The Forum sat down to speak with Todd about her future endeavors in the public health world and what she’s up to after her time at Westminster. Her answers have been lightly edited for clarity and consciousness.

Q: Do you like being a part of Westminster’s spirit team?

A: This is my third year on the spirit team at Westminster and I have had such a blast. It’s so fun to be able to keep doing what I love and still being able to go to college and going after other passions of mine. The spirit team does all of the Westminster halftime games at home, and we do a competition once a year. We typically do jazz dance routines, but this year we have branched out into different styles like lyrical and contemporary which has been a fun change. 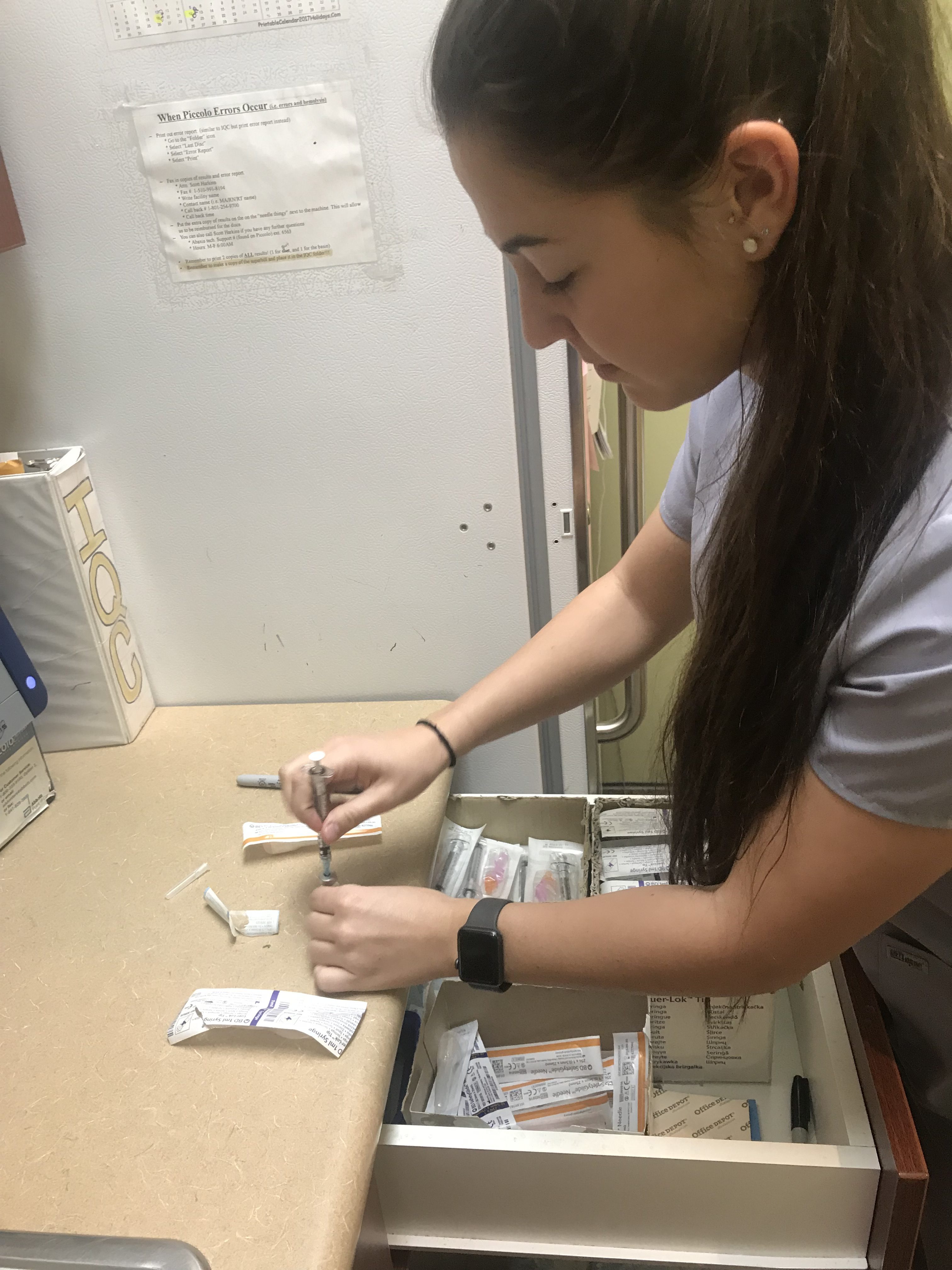 Junior public health major Maddy Todd gets ready to draw up shots for her next patient on Dec. 7 at Families First Pediatrics in South Jordan. Todd said she hopes become a pediatric physician’s assistant after graduation. (Photo by Oakley Matthews)

Q: What made you decide to go from dancing into pediatrics?

A: I always wanted to be a pediatrician. I love kids, and being able to be surrounded by them is what makes me super happy. Kids are the best because they’re so innocent and they aren’t corrupted yet. My favorite part about my job is being around the kids that come into the clinic.

Q: You mentioned you just finished an internship, what was that experience like?

A: I just finished up an internship at the Utah Department of Health in the healthcare associated infections program. That was an awesome internship because I had the chance to basically run a study that was fully funded. Basically, we wanted to find out how communication with patients who had antibiotic resistant organisms and how that information is traveled from different healthcare facilities. I made surveys, phone calls and I analyzed a ton of data. It was really great for me to see all of the steps that are required when you do an actual study. I am actually going to be published in a Utah Department of Health study before I graduate which is a really cool feeling.

Q: What are your plans once you graduate?

A: I want to be a pediatric physician assistant [PA] someday, so I hope to get accepted into PA school and hopefully at the University of Utah so I can stay close to my family. It’s extremely difficult to be accepted into PA school, especially in my case as a 21-year-old. Typically people who are accepted are in their thirties. So if I don’t get accepted, my plan is to get a masters degree in public health, and eventually become a pediatric physician assistant.