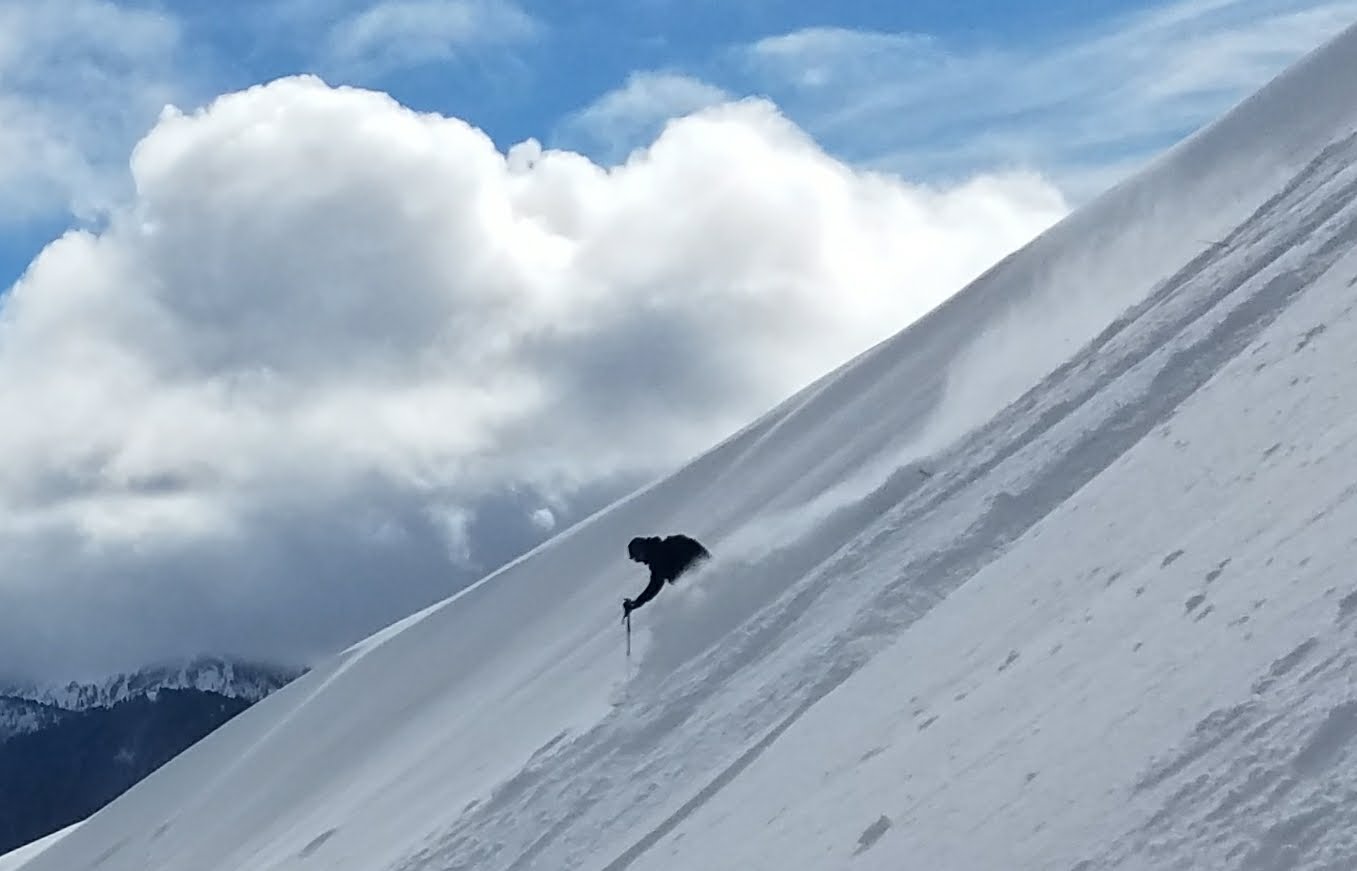 Seventeen-year-old Anders Ingle skis in deep snow on Mt. Regimond in 2017. Avalanches can occur for a number of reasons so skiers need to be prepared before heading into the backcountry to find fresh snow. (Photo courtesy Peter Ingle)

As Westminster College enters November, winter is coming and bringing what Utah is known for, the greatest snow on earth.

Utah is home to many great resorts that are marked with ropes or barriers to mark what is in-bounds with the resort.

To find some untouched snow and find the freshest runs, some people may decide to go backcountry skiing.

“To define backcountry skiing, it’s not just going out in the wilderness where no one else is around,” said Greg Gange, a computer science professor and forecaster for the Utah Avalanche Center. “As soon as you go through a gate in a ski area, it’s backcountry.”

Backcountry skiing and snowboard can be appealing for many reasons. Fresh snow, less people, or a sense of an adventure can all be callings to go backcountry according to theclymb.com.

One of the dangers in deciding to go backcountry skiing is avalanches. 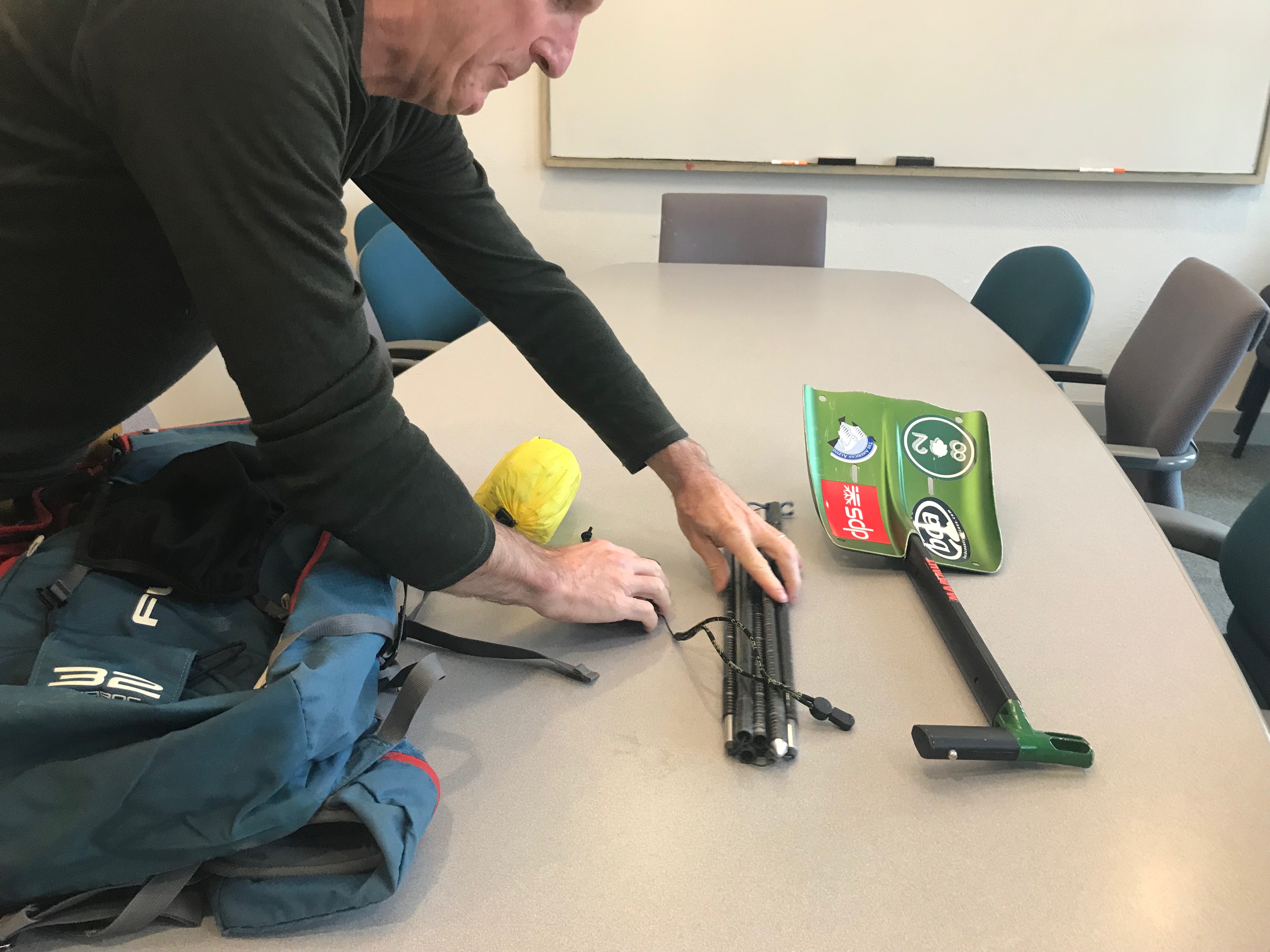 Greg Gange, a computer science professor and forecaster for the Utah Avalanche Center, lays out some of his avalanche essentials on Nov. 2. To stay safe when skiing in the backcountry, advocates say skiers should bring safety gear and take avalanche safety classes. (Photo by Alex Dooley)

Avalanches can occur for a number of reasons. When backcountry skiing, a skier can cause a slide to happen to themselves even while being cautious.

“Most avalanches are actually tiny, they’re little things, we call them class 1.”  Gagne said. “Classes 2-5, a human can get killed in. They’ll die 22 percent of the time from rocks, trees, or trauma, or they could get buried and they don’t have the gear or their partners don’t find them in time. Always take a buddy.”

While avalanche danger will always be present, there are tools and tricks to stay safe while going backcountry skiing.

“You should take a probe, a decent shovel that is able to move a lot of snow, and a beacon,” said Peter Ingle, an education professor and backcountry skier who was caught in an avalanche in early January. “And you should practice with your gear so you know how to use it.”

Collapsible shovels and probes are essential tools to have when backcountry skiing, according to Ingle. Shovels that are capable of moving large amounts of snow can help dig out skiers while probes can be used to find skiers that may be trapped under the snow.

“When you ski with buddies, you should talk about how you all plan how everyone will ski, and where you’re going using points of reference if something happens,” Ingle said.

A beacon is another important device that is used to help locate lost skiers. If a skier were to become separated from a group, the group can use their beacons to find the lost person, even if they were trapped under snow.

Other tools and items can be useful in going backcountry skiing that aren’t commonly talked about.

“One thing I would recommend is bringing hand warmers, not because its cold, but if someone were to get hurt they can be used to keep something warm while you get some first aid,” Ingle said. “I also have an inclinometer that I use to find the angle of the slope because knowing the difference between 32 degrees and 35 degrees is useful in the Wasatch because a majority of avalanches happen at 35 degrees and above, so it’s a good tool to have.”

According to Andy Nassetta, a Utah Avalanche Center educator, having all the essential tools and gear to take is good, but not enough to stay safe. Skiers that are interested in skiing in the backcountry should also take basic avalanche safety classes.

“You’ve gotta take some avalanche classes. There are some that local shops offer and some places around Westminster,” Nassetta said. “You’ve gotta know before you go.”

The Utah Avalanche Center is a local non-profit organization which provides avalanche forecasts, avalanche classes and other information on their website to help prepare Westminster students who are currently or planning to backcountry ski.

“Some people don’t know that the minute you cross the ropes, you’re in the backcountry,” Nassetta said. “My three points I would make are: Know that the season has begun, so learn about avalanche safety before you go. Always have the right equipment and know how to use it before you go. And finally, just stay informed. Check the forecasts and stay educated.”